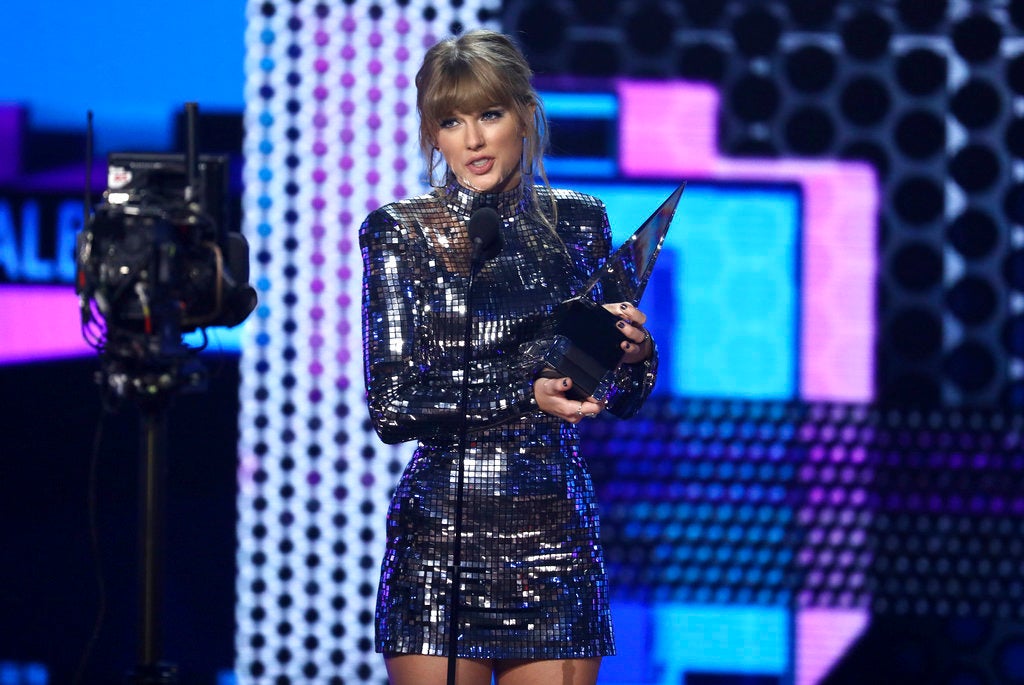 Taylor Swift accepts the award for favorite pop/rock album for “Reputation” at the American Music Awards on Tuesday, Oct. 9, 2018, at the Microsoft Theater in Los Angeles. Image: Matt Sayles/Invision/AP

Taylor Swift kicked off her week with a rare political post on social media, and at the American Music Awards she continued the conversation by encouraging fans to vote in the upcoming midterm elections.

Swift won four honors including artist of the year at the fan-voted show on Tuesday in Los Angeles, beating out Drake, Ed Sheeran, Imagine Dragons and Post Malone for the top prize.

Swift announced on Sunday that she was voting for Tennessee’s Democratic Senate candidate Phil Bredesen, breaking her long-standing refusal to discuss anything politics.

Voting was a hot topic at the AMAs. Host and Golden Globe-winning “black-ish” actress Tracee Ellis Ross wore a shirt that said, “I am a voter,” and comedian-actor Billy Eichner told the audience, “The biggest election of our lifetime is happening.”

“Please grab your friends and tell them to vote. Now is the time. If you believe in equality for women, for people of color, for the LGBTQ community. If you believe that climate change is real and that we need to do something about it,” he said onstage before presenting an award.

“And you can go to Vote.org like Taylor Swift told you to,” he added.

Swift made history by becoming the most decorated woman in the show’s history with a total of 23 AMAs. Despite having the year’s top-selling album and three No. 1 hits, Drake didn’t win a single award. He did not attend the show but tied Cardi B with most nominations walking into the AMAs.

Swift kicked off the show with a performance of “I Did Something Bad,” while Cardi B — who won three honors — picked up the night’s first award, favorite hip-hop/rap artist, which she dedicated to her daughter. 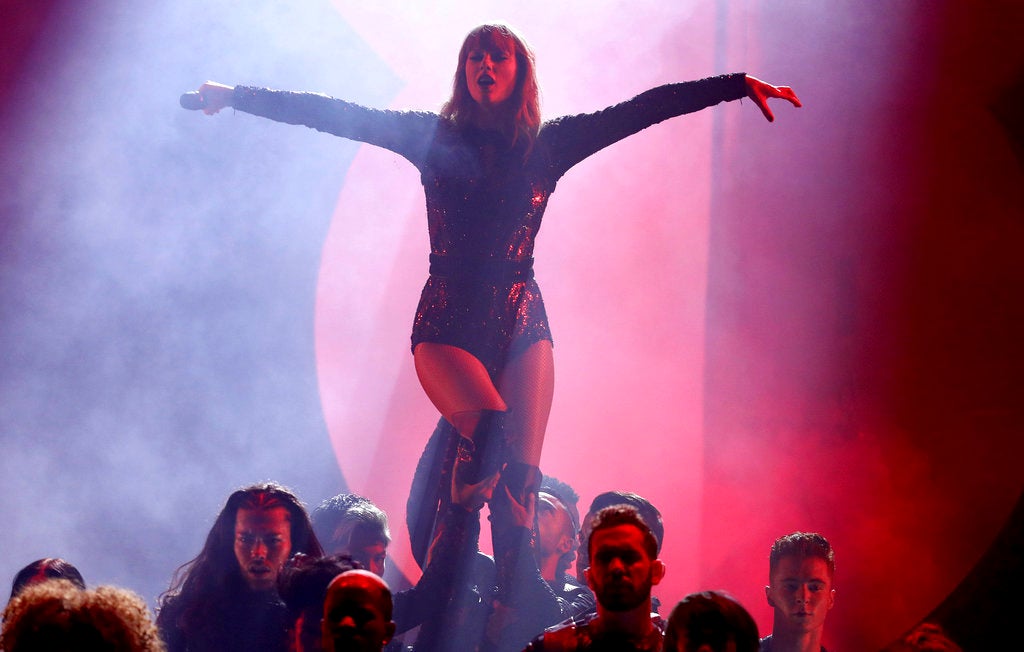 Taylor Swift performs “I Did Something Bad” at the American Music Awards on Tuesday, Oct. 9, 2018, at the Microsoft Theater in Los Angeles. Image: Matt Sayles/Invision/AP

“I really want to thank my daughter,” said Cardi B, who gave birth to Kulture Kiari Cephus in July. “I gotta prove people wrong. They said I wasn’t going to make it after I had a baby.” 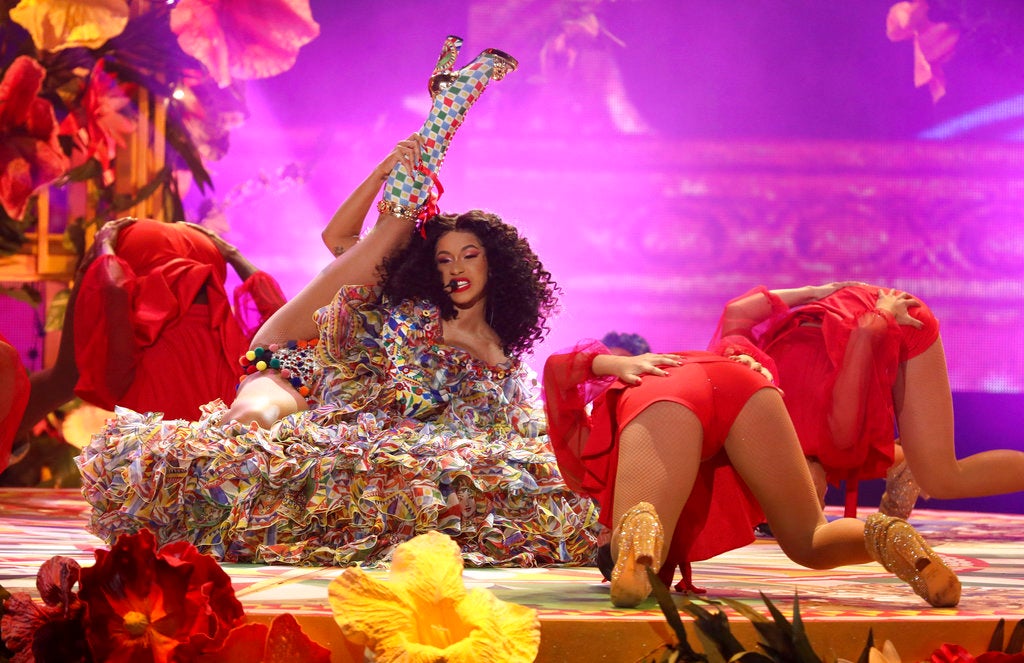 Cardi B performs “I Like It” at the American Music Awards on Tuesday, Oct. 9, 2018, at the Microsoft Theater in Los Angeles. Image: Matt Sayles/Invision/AP

The rapper hit the stage to give a festive and colorful performance of her No. 1 hit, “I Like It,” where she was joined by J Balvin and Bad Bunny, who was wheeled onstage inside a shopping cart. Cardi B’s husband, Offset of the rap trio Migos, danced along in the audience with group member Quavo as Cardi B worked the stage with vibrant dance moves, including the salsa.

Cardi B returned the favor, screaming happily when Migos was named favorite pop/rock duo or group, beating out Maroon 5 and Imagine Dragons, later in the show.

“We did not know we was winning this at all,” said Quavo, also giving a shout-out to group member Takeoff, who didn’t attend the AMAs. 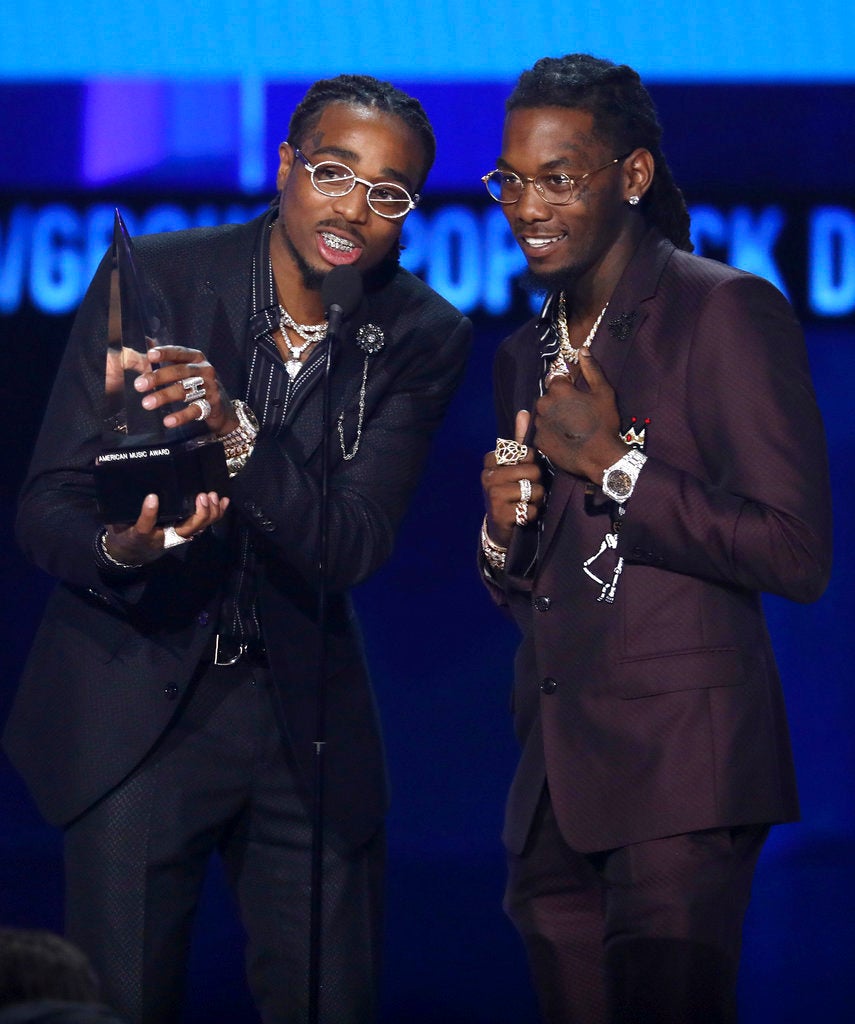 Quavo, left, and Offset, of Migos, accept the award for favorite pop/rock duo or group at the American Music Awards on Tuesday, Oct. 9, 2018, at the Microsoft Theater in Los Angeles. Image: Matt Sayles/Invision/AP)

“I want to thank you sexy lady,” Offset said, pointing to Cardi B.

Like Cardi B’s performance, rising newcomer Ella Mai also won over the crowd when she sang the year’s biggest R&B hit, “Boo’d Up,” starting the performance as she walked down the aisle of the Microsoft Theater. Khalid, Quavo and Offset were some of the audience members dancing along, while others sang and some even filmed her with their phones.

Others who shined onstage included R&B singer Ciara, who showed off her skilled dance moves and was joined by a fierce Missy Elliott. Carrie Underwood was in perfect form vocally, and Camila Cabello — who tied Swift with four wins — gave a heartful, touching and vocally impressive performance of the ballad “Consequences,” earning her a standing ovation. 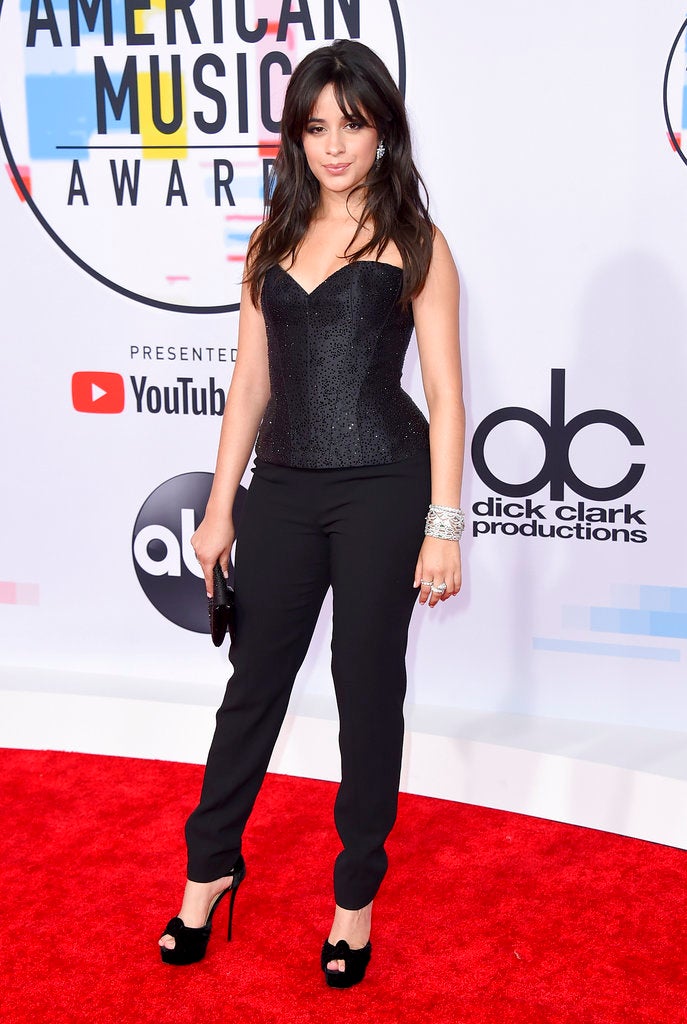 The three-hour show closed with a rousing tribute to Aretha Franklin, who died in August. Gladys Knight, Ledisi, Mary Mary, Donnie McClurkin and CeCe Winans were among the musicians who paid tribute to the Queen of Soul’s gospel roots and her iconic album, “Amazing Grace.”

Rapper-singer XXXTentacion, who was fatally shot in June, was also honored: He won favorite soul/R&B album for his 2017 debut, “17.” It was days after he was named best new artist at the BET Hip-Hop Awards.

His mother, Cleopatra Bernard, said she was honored to accept the award on behalf of her son. “I’m so nervous,” Bernard said as the audience cheered her on.