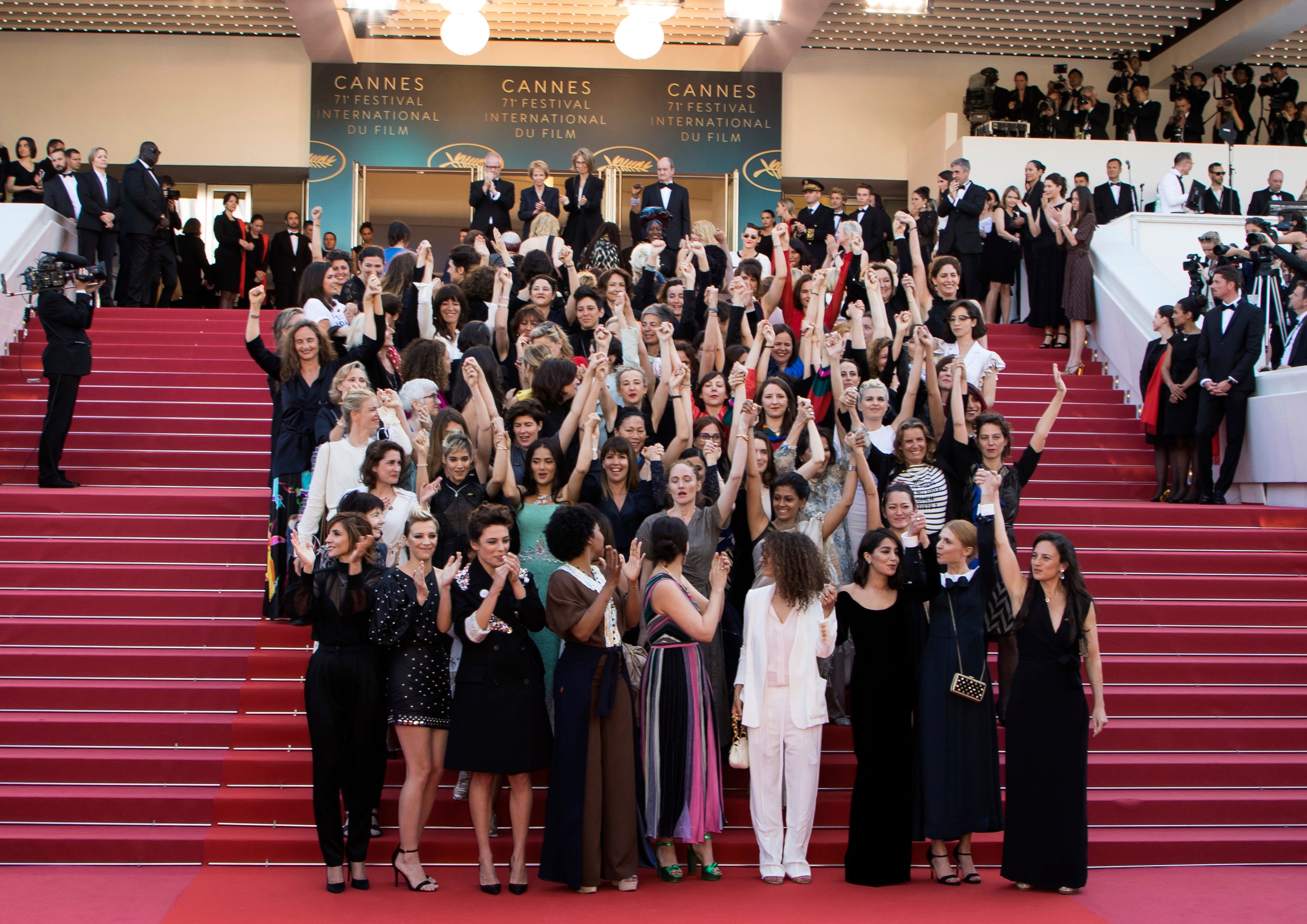 In this May 12, 2018 file photo, 82 film industry professionals stand on the steps of the Palais des Festivals to represent, what they describe as pervasive gender inequality in the film industry, at the Cannes Film Festival in Cannes, France. The #MeToo movement has gone far beyond the movies, but Hollywood remains ground zero in a cultural eruption that began 12 months ago with the revelations about Harvey Weinstein. (Invision/AP, File)

LOS ANGELES — In the year after the downfall of Harvey Weinstein and the rise of #MeToo awareness, women in Hollywood are still processing and evaluating what, if anything, has fundamentally changed in their business — from the nature of scripts to an increase in basic opportunity.

Some say that things have absolutely changed, while others struggle to see any discernable difference that can be attributed to the cultural awakenings and discourse of the past year. In other words, if there are more female-directed and written projects or #MeToo-adjacent story lines, it’s likely not because of #MeToo, but a byproduct of other factors.

“I do think overall there’s been a change, but I don’t think a year is enough to see the real effect of this movement,” said Juliet Berman, who heads up development for Treehouse Pictures, which produced the Netflix rom-com “Set It Up.”

It’s not hard to find films that seem to be speaking directly to the #MeToo moment. This summer saw the all-female “Oceans 8” do well at the box office. The indie “Eighth Grade” has a disquieting scene between a 13-year-old girl and an older boy in a car. While both are fitting of the moment, both were also in the works before The New York Times wrote that first Weinstein piece last October.

Financiers have, generally, sought out more submissions of female-driven projects in recent years, not because of #MeToo, but because it has been proven to be good business with the undeniable success of films like “Wonder Woman,” which also came out months before Weinstein’s downfall. Hollywood goes where the money is.

Kristen Stewart has noticed a greater interest in more female-focused stories in the past year, although notes that there is a certain amount of hypocrisy to it.

“I think that a lot of scripts that have probably existed for a long time are now being looked at again,” said Stewart, who is working on her feature directorial debut. “It’s kind of something that I’m totally willing to take advantage of, but you have to be aware of it so you can make fun of it a little bit and then use it to your advantage. There are people now who five years ago would be like, ‘no, no, no,’ now being like ‘actually that’s a beautiful, fully empowered female story and I think you’d be great in it.’ Like, ‘Cool! Give me the money for it.'”

Academic studies have for years highlighted just how underrepresented women are in film, both in front of and behind the camera, and a report from USC’s Annenberg Inclusion Initiative from July concluded that there has been no significant progress toward equality among the top-grossing films in a decade.

Those who work at the script level have not, in general, seen any significant changes, beyond male screenwriters writing more female characters. But what might look like progress in an industry that still has a deplorable track record of representation also comes with a caveat — they might be female, but that doesn’t make them nuanced, or well-written.

“A lot of male writers are still very bad at figuring out motivations for their female characters,” said Kate Hagen, the director of community for The Blacklist, which surveys the best unproduced scripts in Hollywood. “We get a lot of male screenwriters who, if it’s an action script and a woman is on a quest for vengeance, they can’t think of anything that would motivate her beyond having a dead child or a dead husband or being raped.”

A survey Hagen conducted last year found that only 29 percent of Blacklist scripts that featured female protagonists passed the Bechdel Test, a popular measuring stick that requires a film to have two named female characters talking to one another about something other than a man. The survey also found that men more than women depict sexual violence in their scripts.

While the nature of scripts may have more work to be done, some say that women are being considered for more directing jobs in recent months.

“I see directors’ lists for projects including more women,” said Susan Johnson, who directed “To All The Boys I’ve Loved Before.” ”I don’t know that they’re being hired, but they’re certainly being considered more, which is a small baby step.”

She added that the type of material she’s being offered is still “very stereotypical … it’s rom-coms and comedies and so forth.” It still baffles her that “Ocean’s 8” was directed by a man.

Johnson and many others see greater strides being made in television, where not only are hiring practices favoring women and unrepresented groups, but many have even addressed #MeToo head-on in story lines, from “The Unbreakable Kimmy Schmidt” to “Younger” and “The Bold Type.”

It’s not that movies won’t eventually see #MeToo-inspired changes, but they simply take longer to make. And the first wave of tangible changes may be on the horizon.

Michelle Williams was shooting the comic book movie “Venom” last October, amid the early stages of that cultural earthquake. Not only did she notice that the set was a changed place — professional, with no insinuation or “slightly inappropriate touching,” but she also felt emboldened to strike or add lines to make her character more empowered and to ensure the film felt like one of the #MeToo era.

“My character has this line in the movie and she says, ‘I love you. But I love myself more,'” Williams said. “And I really wanted that dignity and that ability to stand up for yourself and say, ‘I won’t allow any of that behavior.'”

And yet her friend and frequent collaborator, the director Kelly Reichardt (“Certain Women”) has still struggled.

“It was supposed to be the year of the woman,” Williams said. “And then she couldn’t get her film financed.”