Twenty One Pilots score again with terrific ‘Trench’ — a review 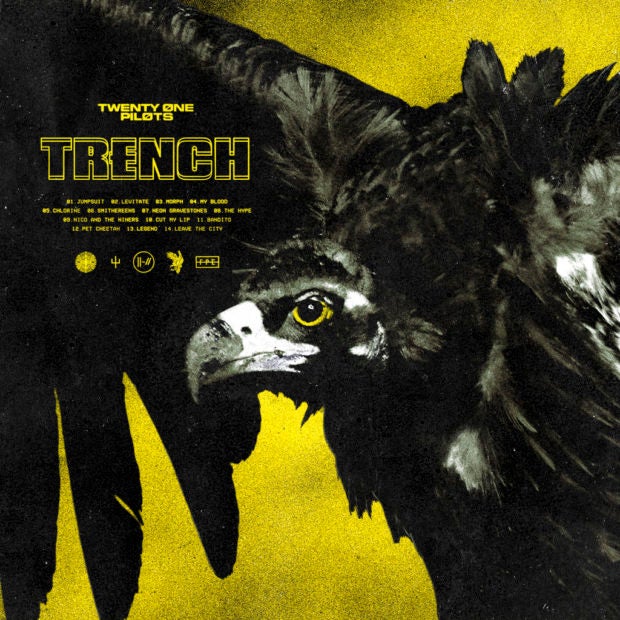 It’s going to be hard for Twenty One Pilots to top the success of their last album. Every tune on “Blurryface” went gold, platinum or, in some cases, multiplatinum — the first album to do so in history. But if anyone’s going to do better, it’s these two guys from Ohio.

“Trench,” the 14-track, fifth album from vocalist Tyler Joseph and drummer Josh Dun (as well as songwriting help from Paul Meany), is every bit as good as “Blurryface,” continuing the band’s genre-bending trademark of tackling various styles and showcasing a knack for songwriting.

The band comes fast out of the gate with the throbbing bass line of “Jumpsuit” with insecurity in the lyrics (“I can’t believe how much I hate/ Pressures of a new place roll my way”). Then it’s on to Dun’s kinetic drumming on “Levitate,” a blissed-out and terrific “Morph” and The Killers-like, falsetto-fueled “My Blood.” Further ahead, there’s the reggae-tinged “Nico and the Niners,” the ’80s-sounding “The Hype” and the complex, constantly shifting “Bandito.”

We reach peak Twenty One Pilots on “Pet Cheetah,” an exhilarating and daffy tune that namechecks Jason Statham as it mixes techno, rap and rock, along with a healthy dose of reggae and house. No one out there makes music as thrilling as this.

“Trench” is a more low-key album — “Cut My Lip” and “Neon Gravestones” are slow burners — and Joseph and Dun show maturity in not overworking songs, too. The last track, “Leave the City,” is a piano-driven gem with understated drumming and ghostly vocals.

Of course, it wouldn’t be a Pilots record without opaque lyrics that connect the songs — “jumpsuit” and “neon” — and the album to a larger fantasy narrative that has spooled out over several albums and onto websites. We’ll leave all those clues — references to Dema and the bishops and Nicolas Bourbaki — to the fans on Reddit.

“Trench” also finds Joseph in a confident mood, lyric-wise, even mocking songwriting itself. “Chorus, verse, chorus, verse/ Now here comes the eight,” he sings on “Levitate.” On “Smithereens,” he croons: “For you, I’d go write a slick song just to show you the world.”

Well, he’s certainly done that. He’s made another album full of them. MKH