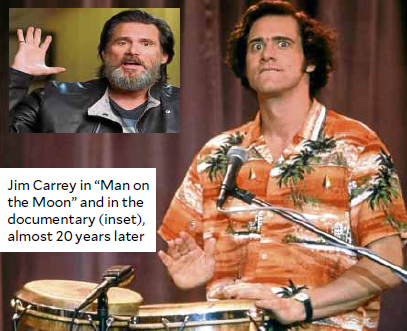 Nearly two decades after a video crew followed Jim Carrey around on the set of Milos Forman’s “Man on the Moon,” footage that stayed in his office for years was unearthed, revealing the impressive—and often unsettling—transformations the “Ace Ventura” actor had to undergo to portray the late performer Andy Kaufman, and his similarly odd persona, Tony Clifton.

Netflix’s kilometrically titled docu “Jim & Andy: The Great Beyond – Featuring a Very Special, Contractually Obligated Mention of Tony Clifton” gives interesting parallels between the popular comics, delving into the mindset that Carrey had during the filming of Kaufman’s biopic, as explained through recent commentary by the rubber-faced actor himself.

In it, Carrey winkingly reveals having had a psychic connection with Kaufman, who was known for his eccentric ideas. The resemblance is eerily similar, according to those who knew the deceased artist.

“I decided to speak telepathically to people,” he says in the documentary. “It was completely absurd, but somehow it worked,” Carrey adds, recalling a time prior to making the film. “That’s the moment when Andy Kaufman showed up, tapped me on the shoulder and said, ‘Sit down. I’ll be doing my movie.’ What happened afterwards was out of my control.”

Chris Smith’s “Jim & Andy …” also illustrates how complicated it was for both Carrey and his coworkers, as his method acting and off-camera antics sometimes went overboard. This was especially true when he “became” the grumpy Tony Clifton—a heavy-drinking, overweight and loud character.

It’s especially interesting when familial connections are revealed—Carrey talks fondly about his late dad, who was “the funniest person in the room” as well as a musician. He remembers, almost in tears, how he lost him just as he was becoming successful in 1994, when he starred in three films: “Ace Ventura: Pet Detective,” “The Mask” and “Dumb and Dumber.”

The Canadian-American actor also recounts having a corresponding, unintentional mindset for each movie he was making—“Eternal Sunshine of the Spotless Mind,” for instance, came at a time when he was “broken,” which served the project well. And “The Truman Show” seemed to reflect his own life “in a bubble.”

The more mature, bearded Carrey, who’s been doing less films lately, has become active in painting scathing political illustrations, sharing art that centers on his disappointment in the Trump administration.

He offers deep and contemplative insights into his life in this documentry, from time to time. All these, plus previously unseen footage with his “Man on the Moon” costars Paul Giamatti, Courtney Love and Danny DeVito give a clearer look at the real, off-cam dynamics—and at Carrey’s subsequent shedding-off of his eventually well-received screen identity.