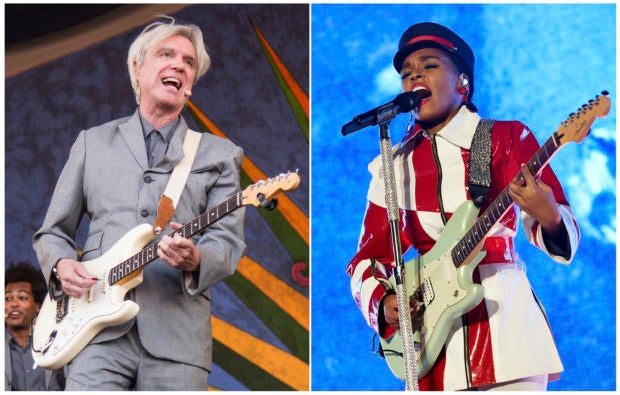 This combination photo shows David Byrne performing at the New Orleans Jazz and Heritage Festival in New Orleans on April 29, 2018, left, and Janelle Monae performing in Los Angeles on June 28, 2018. Byrne ends each show on a serious note calling attention to minority victims of violence by covering Janelle Monae’s “Hell You Talmbout”. Monae says she was touched by the gesture, and believes the song’s message needs to be heard by every audience. Image: AP

NEW YORK (AP) — After he burns down the house during his current concert tour, singer David Byrne ends each show on a serious note with a song that calls attention to minority victims of violence.

The Janelle Monae cover, “Hell You Talmbout”, is a rhythmic chant that recalls people like Freddie Gray, Trayvon Martin, Eric Garner and Sharonda Singleton. Gray died after a rough ride in a Baltimore police van, Martin was the Florida teen shot by someone who thought he looked suspicious, Garner died after being put in a chokehold by New York police and Singleton was killed in the Charleston, South Carolina, church shooting.

It’s a bold choice for a 66-year-old white man playing to venues filled with people of a similar age and background. The former Talking Heads frontman is getting some of the best reviews of his career for a strikingly innovative show where he’s joined by a barefoot band that wears its instruments and is kept constantly on the move by whimsical choreography.

Monae wrote “Hell You Talmbout” in 2015 and never officially released it, although video of her performing it circulated online. “Talmbout” is meant as a contraction of “talking about.” Byrne said he saw a stream of it and loved it instantly.

“Here was a protest song that doesn’t hector or preach at us,” he said. “It simply asks us to remember and acknowledge these lives that have been lost, lives that were taken from us through injustice, though the song leaves that for the listener to put together. I love a drum line, so that aspect of the song sucked me in immediately as well. The song musically is a celebration and lyrically a eulogy. Beautiful.”

Byrne, whose penchant for unexpected cover choices has included Whitney Houston’s “I Want to Dance with Somebody”, knew he wanted to perform it. He wrote to Monae, asking how she’d feel about an older, white guy taking it on.

“I was moved that he reached out and asked if he could include the song in his show,” Monae told The Associated Press. “I thought that was so kind of him and of course I said yes. The song’s message and names mentioned need to be heard by every audience.”

Byrne said he likes that it’s not a finger-wagging song.

“I’m not accusing my audience of anything by performing it,” he said. “Other songs in the set allude to politics and injustice, but this one really says, ‘We’ve entertained you, we are all having a great time, but there is this as well. Let’s not forget the times we live in.'”

Byrne brings his show to a climax with Talking Heads’ songs “Burning Down the House” and “The Great Curve”, and the audience roars with approval. The reaction to “Talmbout” at a recent New York gig was notably quieter, although there was no audible hostility. Some audience members have seemed confused by it, particularly at overseas shows.

Before the song begins, he often thanks Monae for letting him perform it, and update it with additional names.

His one fear was that people would see the song as anti-police, but Byrne said he hasn’t seen that.

“The reaction in general has been good, though after the previous celebratory encore it is a little sobering,” he said. “The audience can’t resist the groove, but they are not wiggling all over the place, either. They enjoy it, but realize it’s a reminder of the real world before they head home.” CC

After Prince and Winehouse, Monae tours with Mars

Read Next
11 years later, Tamara Jenkins returns with ‘Private Life’
EDITORS' PICK
Get exciting deals and discounts when you download the new McDonald’s App
Batangas execs, Taal evacuees thank House; hopeful on rehab efforts
SM continues to send relief assistance to remote towns in Batangas
PAL: Passengers with flights to parts of China may request for refund, rebooking
5 years after Mamasapano, son of fallen SAF 44 trooper remembers his ‘idol’
‘A greener, cleaner tomorrow’: A how-to guide for Filipinos who want to help with today’s energy crisis
MOST READ
Taal’s sulfur dioxide emission increases
No time for revelry; Tagaytay instead plans for alert level 5
Seized food items from China tested positive for ASF–BOC
Dina Bonnevie on Coney Reyes: We have forgiven each other
Don't miss out on the latest news and information.