Rhap Salazar hopes to sing with Sam Smith: ‘Nothing is impossible’ 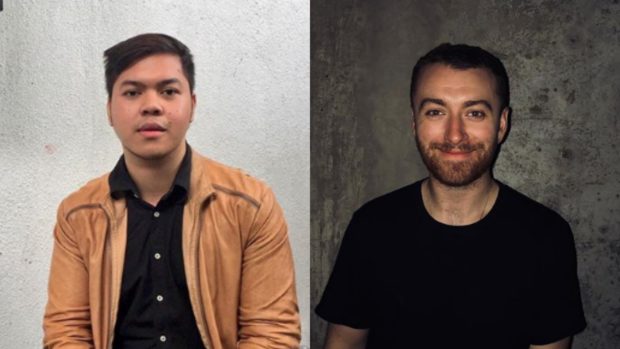 After his failed audition for the UK edition of  “The X Factor,” Rhap Salazar hopes he has better chances to make his wish come true—to meet Sam Smith and maybe sing with him.

The singer expressed his hope on having a duet with the Grammy Award-winning singer on Twitter Tuesday, Oct. 2. He did so as he re-shared his viral rendition of Smith’s hit “Too Good At Goodbyes,” which has now almost 10,200 retweets and almost 31, 500 likes, as of this writing.

In Salazar’s tweet, he tagged Smith and said he has been a huge fan of his since he first heard him in 2013. He added that he watched his first show in Manila back in 2015, and “can’t wait” to see him again this Friday, Oct. 5.

He also expressed his “ultimate dream” of meeting him and possibly having a duet with him. “Nothing is impossible. Praying for this to happen,” he said.

Dear @SamSmith, I’ve been a very huge fan since the first time I heard you in 2013. Watched your first show in Manila, & I can’t wait to see u again on Friday. My ultimate dream is to meet u in person or maybe SING WITH YOU!!! Nothing is impossible. Praying for this to happen🙏🏼 https://t.co/gIwASWBMXo

Salazar even asked help from his fans. He asked them to share the tweet hoping it would get noticed by Smith himself. “It would mean the world to me,” he said.

Hey guys! Please help me out! Kindly retweet my last tweet. It would really mean the world to me. THANKS!!!

Salazar previously expressed his dismay that his audition on “The X Factor UK” wasn’t aired on local TV despite getting four yeses from the judges with his acoustic rendition of Whitney Houston’s “I Will Always Love You.” He got through the next level, but did not make it during deliberations.

Meanwhile, Smith is set to woo his Filipino fans once again on Friday for the Philippine leg of his “The Thrill of It All” world tour at the Mall of Asia Arena in Pasay City.  /ra

TAGS: Rhap Salazar, Sam Smith, The Thrill of It All, Too Good At Goodbyes