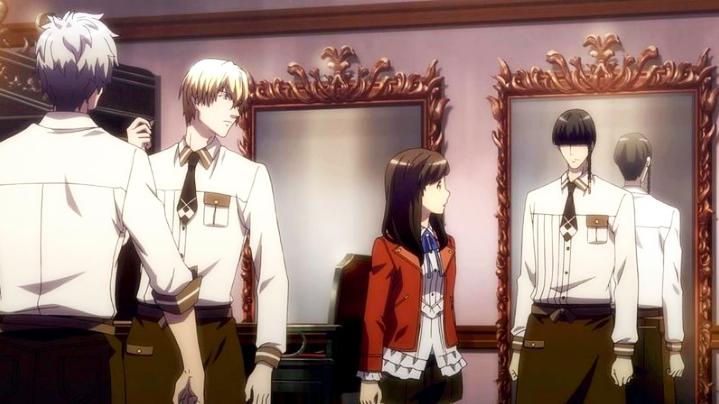 A scene from “Phantom in the Twilight.” The story is set in London because it fits the mysterious mood of the plot and is an “exotic” place for both Japanese and Chinese audiences. © 2018 Happy Elements AP

Animation works jointly produced by Japanese and Chinese companies are on the rise. One of them is “Phantom in the Twilight,” aired on TV stations such as Tokyo MX and BS Fuji, and streamed in China.

The interesting aspect of this work is that it doesn’t make the differences between the two countries apparent to viewers.

The “Phantom” story takes place in a backstreet London cafe called Cafe Forbidden. While the place looks like any ordinary coffee shop, the people working there are most unusual: There is a vampire, a werewolf, a ghost, a Chinese hopping vampire and the like.

Baileu Ton, a student from China who wanders into the cafe, learns that these members are engaged in solving mysterious cases caused by beings called Umbra. Ton’s great-grandmother had hunted down Umbras in London a century before.

When her best friend, Shinyao, is abducted by Umbras, Ton realizes a hidden ability that she inherited from her great-grandmother, and becomes the leader of the group, aiming to achieve peace between humans and Umbras.

A Japanese office of Chinese mobile internet company Happy Elements Asia Pacific plans and manages the animation program, while a Japanese studio does the actual production.

Happy Elements producer Mari Hoshino, 31, said that their goal was to overcome the perceived limits of having two cultures from different countries.

The Chinese market for cultural content such as anime, manga and games is as large as ¥50 trillion. The absolute number of anime fans in China exceeds that in Japan.

Hoshino said that a year of thorough market research was done before starting “Phantom,” which targets women in their teens and 20s who have a “new set of values.”

Hoshino stressed that there are now many Chinese women who prefer to pursue their own choices in life.

“As the economy grew, younger women started to think happiness is not only about having a stable life that could be achieved by listening to and following their parents’ orders. We wanted to support them,” she said.

With many good-looking men around, the cafe is like a reverse harem for Ton. But since she is not feminine in character, there is virtually no element of romantic comedy here. Rather, it’s Shinyao who looks more like the heroine, while Ton projects the image of a knight on a white horse. In this respect, the anime has a different feel from a typical Japanese one.

“There are cases of so-called joint Japanese-Chinese productions in which the Chinese only pay the money and the Japanese do the work,” Hoshino said. “But in our case, staff from both sides have had heated discussions from the beginning when we made the script. We put in the same amount of enthusiasm, too.”

Each episode is streamed on two major video sharing platforms in China — bilibili and iQIYI —only a few days after it is aired in Japan. It is quite rare to have an animation program shown the same week in the two countries. As of the eighth episode, the anime has been viewed more than 10 million times in China. It’s not a bad achievement at all.

I would say the visual aspect of “The Phantom” is good. Yet there is room for improvement.

Overall, I have high expectations for this work. Hoshino said she won’t depend on the buzzword of it being a “joint Japanese-Chinese production.”

“I want to produce a piece that is the fruit of various of values,” she said. /atm