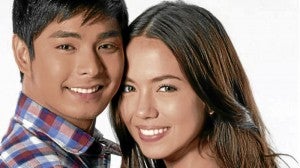 MARTIN AND MONTES. Cast as lovers in multigenerational drama series.

THE first telecasts of the new soap, “Walang Hanggan,” attracted quite a lot of viewers, who were drawn to the debuting teleserye by its potent mix of come-ons, led by the pairing of two thespic icons, Susan Roces and Helen Gamboa (with Eddie Gutierrez thrown in for good measure) and the revival of the ’80s love team of Dawn Zulueta and Richard Gomez.

Their pairing in the “visually memorable” film, “Hanggang sa Dulo ng Walang Hanggan” (it was shot in ultra-scenic Batanes) has imbued their new series with resonances that add to its nostalgic cachet. Is the 2012 TV production measuring up to the standard set by its celebrated predecessor?

On point of memorably beautiful visuals, not quite. But, the dramatic tension established between the new show’s senior romantic leads hints at potent undercurrents that should keep drama fans interested—and watching the show on a regular basis.

At the start, however, the main focus of the unfolding storytelling was on the romance between Dawn and Richard’s characters. Here, the show hits a visual snag, because the two actors are already in their 40s. We hoped that the storytelling would speed up so the visual awkwardness would pass, and the two leads could finally come into their own as mature characters—and performers.

After all, it was quickly established that Dawn’s character was deemed unworthy of Richard’s love by his mata-pobre mother (Helen), and that Dawn believed that he courted her just to win a bet!

The pain and hate that such vile actuations (whether real or imagined) have engendered run extremely deep and can haunt and weigh heavily down on the young characters played by Coco Martin and Julia Montes when they fall in love—so, we’re in for a long and strongly motivated spate of both high and low melodrama—“Walang Hanggan!”

To date, what we like most about the new series is its brisk unfolding. While the story it tells is multigenerational, we aren’t required to start at the very beginning, with the birth of the original grandparents(!), as some other drama series do.

To be sure, the story’s theme and plot premise, involving as they do the age-old “rich-poor” dichotomy, is by no means fresh and vital. But, our hope is that the experienced stars involved, especially Susan and Dawn, will come up with felt and vivid portrayals to make up for the slack.

As for Coco and Julia, who are being paired here for the first time, they’re both palaban performers, so our expectation is that their scenes won’t come off as merely simperingly sweet and routinely romantic.

Julia’s being a relative tyro adds to her thespic burden, because she has to keep up with her much more experienced co-stars—but, if she’s able to do that, her success will be especially significant and rewarding.

Finally, “Walang Hanggan” could also prove to be an unusually challenging assignment for Dawn and Richard. In making this comeback by way of the dramatic “sequel” to their celebrated co-starrer, they are obligated not just to revive the ardor of their original pairing, but also to take it further, into the more mature and complex realms of hate and vengeance. Let’s hope they’re up to it.

The show’s succeeding telecasts have focused mostly on the Julia-Coco tandem, for the kilig value of their “young” love scenes. But, all that extended focus is turning out to be cloying, and the young actors’ limitations are showing—so, we hope that the Richard-Dawn subplot will be focused on again—pronto!