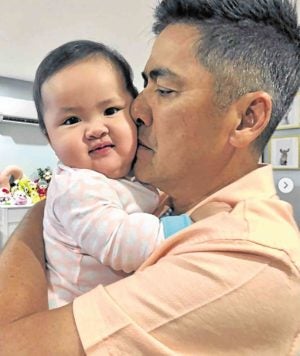 As someone who’s “very private” about his personal life, Vic Sotto admitted that he was initially “a bit uneasy” about his wife, Pauleen Luna, sharing photos of their 11-month-old daughter, Tali, with the public on social media.

“I used to tell her not to post too many photos of our child—for privacy,” he told select reporters at a recent photo shoot for his upcoming sitcom on GMA 7, “Daddy’s Gurl.”

But when he found out that the posts about Tali cheer up a lot of fans, Vic eventually relented. Before long, he found himself looking forward to new posts.

“Even I have been anticipating new updates! I got to read people’s comments, saying that they find the photos amusing; that Tali never fails to put a smile on their faces and make their days feel complete,” related Vic, who maintains a secret Instagram page that he opens once in a while to “stalk” his loved ones’ online activities.

Yes, bashers pop up from time to time to spew negativity. “I just tell Pauleen to ignore or block netizens who are hurtful,” he said. “But you can’t do anything about that—social media is open for all.”

It was apparent that the 64-year-old show biz icon is excited about having a tiny tot again. “My youngest then (Paulina) is already 26 or 27. So it has been a long time since I have had a baby,” he pointed out.

Vic described Tali as a “very chill and happy baby,” who’s easy and a joy to take care of. “We’re lucky because she’s not like most babies who cry every hour or so. She no longer keeps us up at night, because she sleeps soundly—she goes to bed early and wakes up at 8 a.m. the next day,” he said. “I feel that she’s a very smart baby… You won’t be able to distract her when she’s busy watching her favorite nursery rhymes show. She’s very focused; I would call her name repeatedly, but she would just ignore me. She has such a long attention span.”

She has also started speaking syllables, Vic said, and calls him “Dada.” “Pauleen isn’t so pleased, though, because she calls her ‘ate,’ despite being taught to say ‘Mama.’ It cracks me up. Pauleen would tell me, ‘Ano ba ‘tong anak mo, ‘ate’ ang tawag sa ‘kin!’”

Vic has seen Tali throw a full-blown tantrum only once so far. And that was when her first tooth was starting to come in. “She was in discomfort and had fever, so she was understandably feeling agitated. But that was only for a night,” Vic said. “When she’s not in the best of moods, I just sing to her, and that usually does the trick.” 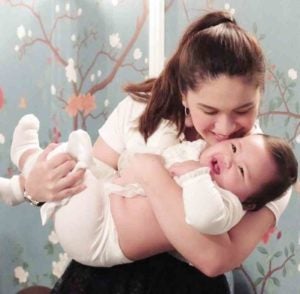 Asked what has been the toughest part of taking care of Tali, Vic jested, laughing, that carrying her makes his back hurt.

“She weighs as much as a 10-year-old kid!” he said of his chubby baby. “She’s actually a bit overweight and is now on a diet. Whenever we bring Tali to the pediatrician, he would go, ‘O, lumaki na naman ’to!’

“We were advised not to feed her formula all the time, and instead give her fresh milk. I don’t think it made much of a difference, though! She has also started eating solid food. She eats whatever you give her.”

Turning serious, Vic said he finds it hard to leave Tali for extended periods of time.

“A few months back, Pauleen and I went to London and stayed there for 10 days. She’s not a crib baby; she sleeps beside us. I missed that,” he said.

Luckily, Tali is now old enough to travel, so Vic and Pauleen take her with them when possible.

“So far, she has been to Cebu, Siargao and Hong Kong,” he said. “I’m not sure if she’s going to remember anything, though.”

As a mother, Pauleen is “focused,” “doting” and, as it turned out, quite the events planner. “Tali is turning 1 in November, but she started calling up suppliers and venues as early as April!”

Read Next
Wan’s World, October 1, 2018
EDITORS' PICK
Comelec division junks petition to cancel Marcos COC for president
Acer starts the year off strong with the Aspire Vero National Geographic Edition
PH logs 37,070 more COVID-19 cases; over 33K others recover
‘Not yet the end’: Lawyer says Marcos Jr’s DQ cases to take lengthy process
The best of bayside and city living at SMDC’s Sail Residences
Over 3 Million worth of prizes to be won at Smart Padala’s SENDali Manalo Promo!
MOST READ
NBI foils escape attempt of Kerwin Espinosa, two others
Marcos camp ‘extends hand of unity’ after COC cancellation bid is thrown out
Wendell Ramos finally gets to hold his newborn for the 1st time
No vaccine, no French Open for Djokovic, says French Sports ministry
Don't miss out on the latest news and information.