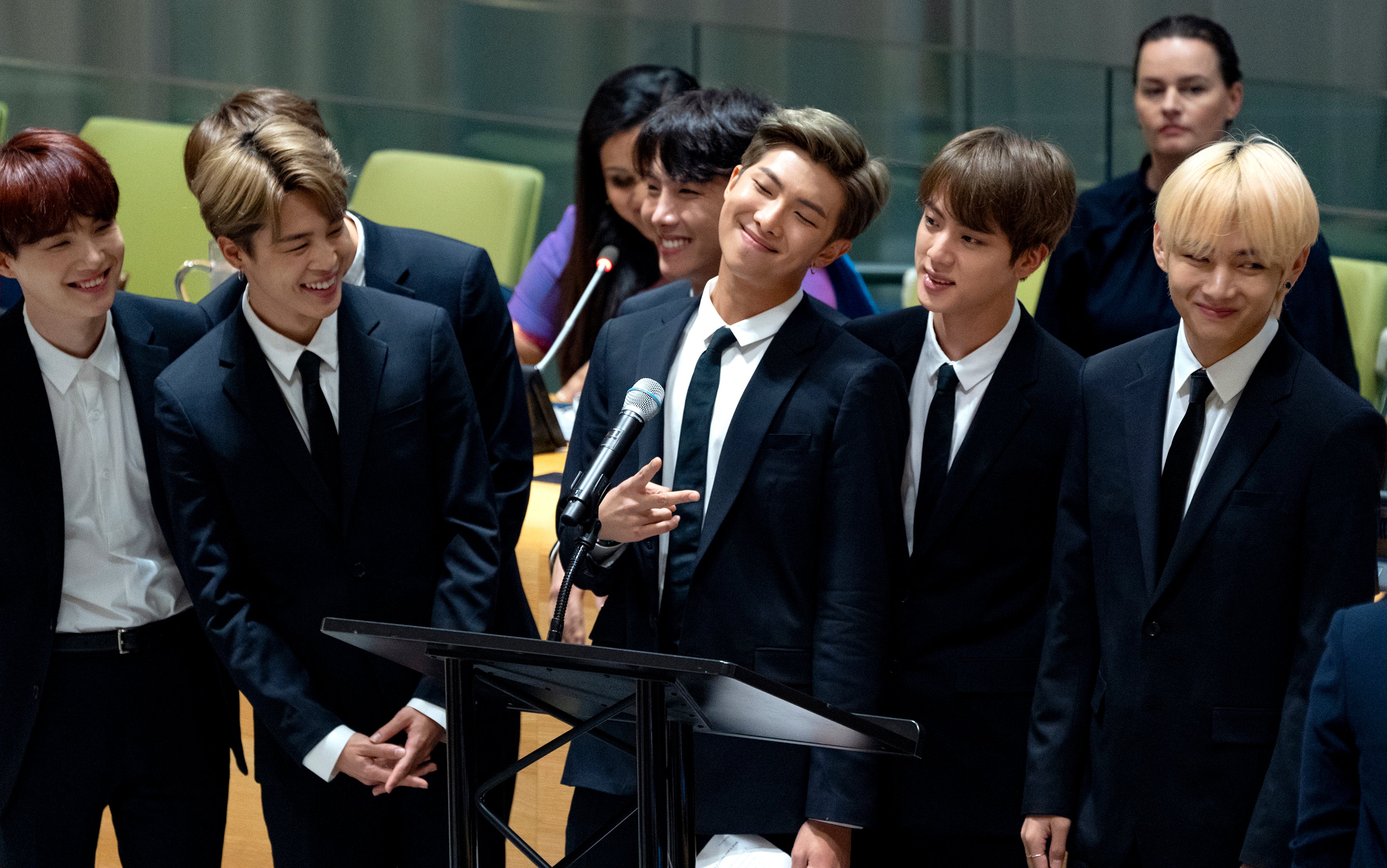 SEOUL  — In a rare move for K-pop, BTS’ UN speech about self-acceptance embraced everyone including sexual minorities.

K-pop sensation BTS embraced self-love and encouraged young people around the world to “speak themselves” regardless of their origin, skin color and gender identity, in a speech at the United Nations General Assembly in New York on Monday.

Kim Nam-joon, better known as RM, said, “No matter who you are, where you are from, your skin color, your gender identity, just speak yourself,” expressing support for sexual minorities.

The group’s six-minute speech kicked off the launch of the UN’s new youth initiative Generation Unlimited, a program designed to tackle the global education crisis and make education more accessible for young people.

BTS is the first South Korean act to address a UN session.

During the speech, Kim reminisced about his happy childhood in the city of Ilsan, Gyeonggi Province, in South Korea before he began to worry about what other people would think and eventually “shut out” his own voice.

Referring to the intro track from the group’s EP “O!RUL8,2?”  which includes the line, “My heart stopped when I was maybe 9 or 10,” Kim said, “Looking back, I think that is when I began to worry about what other people thought of me and started seeing myself through their eyes.”

Despite the hurdles that he faced even after joining BTS, Kim said that he has come to love himself for who he is, who he was and who he hopes to be. He urged fans to speak up for themselves and tell their stories.

In contrast to how open many American pop singers are about their political views, K-pop acts are often careful about expressing their views when it comes to topics like gender identity.

Singers like Amber of f(x) and Jo Kwon from 2AM are among those in the K-pop scene who have had to deal with online criticism over their looks not conforming to traditional gender expectations.

In a rare move in June, singer Tiffany from Girls’ Generation thanked the LGBTQ community for the love and inspiration it has showed, in an open letter she wrote for Billboard.

The self-love-themed speech received a warm reception both at the venue and online.

South Korea’s first lady Kim Jung-sook, who sat next to BTS during the event, said she was proud of the group and congratulated it for topping Billboard’s albums chart.

The first lady also thanked the band for lending strength to young people who struggle with fears and worries about their future, through its music.

“Words can’t describe how proud I am to be a fan of such an amazing, well rounded, hard-working and inspiring group who are doing their best to make a world a better place,” one Twitter user wrote.

Another user wrote, “People should start realizing that BTS isn’t your typical boy group, but more of a movement to the youth. They’ve been using their platform to speak on issues they believe in, including the hardships they’ve gone through as an idol and individually.

The UN’s choice of BTS as a speaker was not a coincidence as the group has been advocating self-love for quite some time.

The proceeds are used to protect and support child and teen victims of domestic and school violence as well as sexual assault around the world.

The funds also provide education to local communities for violence prevention, according to the campaign’s official website.

The campaign falls in line with the group’s “Love Yourself” trilogy spanning multiple records, with self-acceptance and self-love as the main themes.

Since its debut in 2013, the group has not been shy about touching on social issues through its songs.

In its 2014 song “No,” the septet touched on the hardships faced by young students.

“Dreams disappeared, there was no time to rest/It’s a cycle of school, home or an internet cafe/Everyone lives the same life,” read the lyrics of the song.

In another song, “Baepsae,” which was released in 2015, the group sings, “They call me a try-hard/Our generation has had it hard/Hurry, chase ’em/Thanks to those that came before us I’m spread too thin,” seemingly addressing generation gaps.