Atienza pushes for screening of historical film scripts before production 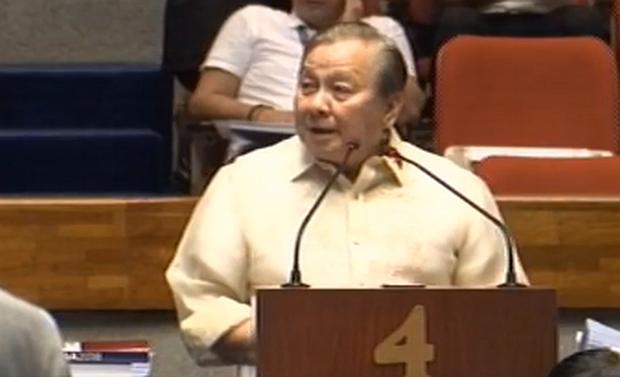 House Senior Deputy Minority Leader Jose “Lito” Atienza Jr. speaks during the plenary debates on the proposed 2019 national budget on Wednesday, Sept. 26, 2018. (Photo from a livestream video posted on the Facebook account of the House of Representatives)

House Senior Deputy Minority Leader Jose “Lito” Atienza Jr. wants to authorize the Film Development Council of the Philippines (FDCP) to screen the scripts of films, especially those with historical accounts, before allowing its production and distribution.

Atienza made the point on Tuesday during the plenary debates on the proposed P120.578 million budget of the FDCP for 2019.

As a case in point, Atienza questioned the film “Goyo: Ang Batang Heneral,” a biopic about Gen. Gregorio del Pilar and a sequel to the 2015 film “Heneral Luna.”

“Goyo,” he said, portrayed Del Pilar and other Filipinos who fought in the historic Battle of Tirad Pass as “a bunch of cowards.”

“I am reiterating my observation on the production of ‘Goyo’ the film presenting the Filipino patriots who volunteered to defend Tirad Pass as a bunch of cowards who ran away when the enemy and when the Americans approached rather than fight to the last as I read it in my books,” he said before the plenary.

[Those who get shot in the back show cowardice. The Filipinos who defended Tirad Pass were not cowards, because they knew they were going to die there. Goyo was not a coward.]

The FDCP is the government agency responsible for the cinema evaluation system, which rates local films to determine their eligibility for tax incentives.

According to Committee on Appropriations Vice Chairman Rep. Eric Olivarez, who sponsored the FDCP proposed budget, these incentives significantly aid in ensuring the production of more quality local films.

Atienza also asked if the script of the movie had been assessed by FDCP prior to its production and release.

Olivarez clarified that the council was only mandated by law to review and rate the films that had already been completed and after the producers apply for cinema classification under the Cinama Evaluation Boared (CEB).

[Wouldn‘t be better if even at the script stage they would already study if a film would have qualities that would qualify it for tax exemption?]

“We are asking this question so that we may come up with a more accurate control of the film industry’s quality of production before they get produced and before they are exhibited,” he added.

During discussions with FDCP Chair Mary Liza Diño-Seguerra, Olivarez said she had committed to review the film and discuss it with the CEB.

“The chair made a commitment to review the film as far as the accuracy of the storyline is concerned, especially if it’s a historical film and to convene with the members of the Cinema Evaluation Board with regards to this matter,” Olivarez said.

“Goyo” was rated A and was given a 100-percent tax rebate, according to Olivarez. /atm