Jane Fonda, her life and men star in a revealing documentary 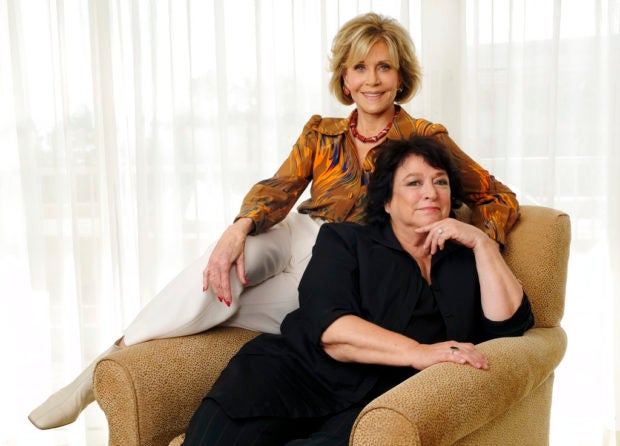 In this July 25, 2018 photo, actress Jane Fonda, background, and Susan Lacy, director of the HBO documentary “Jane Fonda in Five Acts,” pose together at the Beverly Hilton in Beverly Hills, Calif. The documentary premieres on Sept. 24 at 8 p.m. ET. Image: Chris Pizzello/Invision/AP

LOS ANGELES — As beguiling and powerful as Jane Fonda is onscreen, she has yet to play a role that’s a match for her whiplash-inducing life of artistry, celebrity and polarizing activism. Then there’s the personal drama, including serial marriages to three very different husbands with their own claims to fame.

When the 80-year-old Fonda decided to participate in a documentary about her — “Why not? I don’t know how much longer I’m gonna live” — it was with award-winning filmmaker Susan Lacy, who made an intriguing choice: using the men in Fonda’s life as the organizing principle for “Jane Fonda in Five Acts.”

The film, debuting from 8 to 10:15 p.m. Monday EDT on HBO, devotes its first chapter to Fonda’s fraught bond with her emotionally reserved dad, the acclaimed actor Henry Fonda. It was at the end of his life that she managed to draw him closer: They starred opposite each other as an estranged father and daughter in the film “On Golden Pond.”
The 1982 Academy Award ceremony at which Henry Fonda won his only Oscar is what Jane Fonda readily points to when asked to name a Hollywood career highlight. Her father died four months later.

“The fact that it was with this movie, and he asked me to receive it (the award) if he won,” Fonda said in an interview, her steady, blue-eyed gaze reminiscent of her father. “It’s rare that a child gets a chance to do something like this for a parent with whom they have had such a complicated relationship.”

(Co-star Katharine Hepburn won her fourth Oscar and showed her competitive streak. “You’ll never catch me now,” she crowed to Jane Fonda, a two-time winner for “Klute” and “Coming Home.”)

“Five Acts” then moves on to the husbands: French film director Roger Vadim (of the “Barbarella” sex-kitten years), activist Tom Hayden (a match for her growing political fervor) and media mogul Ted Turner (so magnetic that she tried semi-retirement, until she didn’t.)

She recalls the thrill of sexual “electricity” with all three partners, but felt compelled only by pregnancy to marry Vadim (they had a daughter, Vanessa) and Hayden (a son, Troy). She wed Turner in 1991, she said, because he insisted living together was setting a bad example for his grown children.

“But I think it’s really because he’s insecure. I mean, men want to get married,” Fonda said. “I had two important relationships subsequent to Ted, they wanted to get married. They were obsessed with it, because it’s possession.”
Asked about future relationships minus marriage, Fonda has a concise answer: “I’ve closed up shop.”

“Never say never,” parried a smiling Lacy, who was the creator and longtime executive producer of PBS’ “American Masters,” home to profiles of greats including Maya Angelou and Billie Jean King.

The film’s last act belongs to Fonda alone, unbound by marriage and focused on passions including voting rights and other political causes as well as work (which includes Netflix’s “Grace and Frankie” and a planned sequel to the 1980 hit film “9 to 5.”)

Lacy’s approach struck some in her circle, especially younger women, as anti-feminist, the filmmaker said. She defends it as reflecting Fonda’s 2005 autobiography, “My Life So Far,” and Fonda concurs.

“Before I started writing my memoir, I knew that what I was writing was a gender journey. It was a journey defined by my gender. And so it was important for me to explain why that was true,” she said.

Fonda’s voice is strong throughout the film, which draws on 20-plus hours of interviews in which she addresses moments as intimate as the childhood loss of her mother to suicide and an eating disorder. Friends and colleagues including Robert Redford and Lily Tomlin are heard from, along with Turner, the late Hayden and Fonda’s children.

While there was no epiphany for her in watching the film, which she cooperated with but didn’t control, it was rewarding, Fonda said.

“It just brought home very vividly to me what a full, rich life I’ve had, and varied. I mean, there’s been a lot of change and a lot of controversy and a lot of survival,” she said.

Her accomplishments, including a fitness empire that made her a 1980s video star, were irrelevant to critics of her protests against the Vietnam War — especially after Fonda was photographed perched on an anti-aircraft gun during a controversial 1972 wartime visit to North Vietnam. She recently said that moment sent a “horrible” message to soldiers and their families.

Her involvement resulted from a chance wartime meeting with U.S. soldiers in Paris, one that shook her belief that America always fought on “the side of the angels,” Fonda said. But discovering her calling as an activist also was a profound personal moment.

“I had a child, I was in a marriage. But I felt lost and empty. And when these soldiers opened my mind … I was like dry brush and they were this match and, whoosh,” she said. MKH