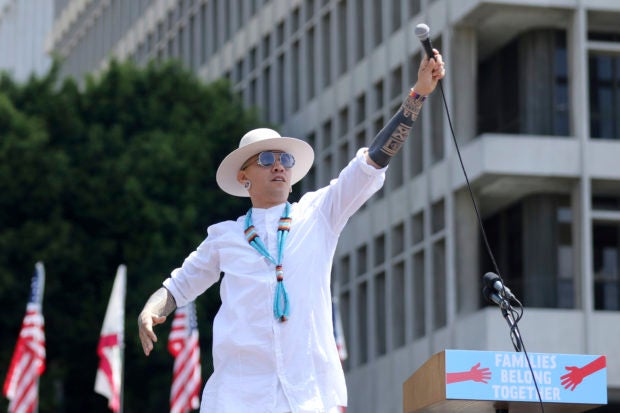 In this June 30, 2018 file photo, Taboo from Black Eyed Peas performs “Where is the Love?” at the “Families Belong Together: Freedom for Immigrants” March in Los Angeles. The Black Eyed Peas tackle gun violence at schools and immigration in two new music videos for their song, “Big Love”. The trio released the videos Friday, Sept. 21, 2018 Image: Invision/Willy Sanjuan via AP

The trio — it’s unclear if Fergie is still part of the group — released the videos Friday. They also announced proceeds from the song will benefit the student-led March for Our Lives organization, calling for stricter gun laws, and Families Belong Together, a protest against the Trump administration policy of separating children from families after they are detained crossing the U.S. border illegally.

In the video confronting gun violence at schools, BEP members will.i.am and Taboo — who portray a teacher and a gym coach — are shot by a gunman along with several students, while others run for safety. Apl.de.ap is a police officer in the clip.

“Big Love”, which is reminiscent of the Black Eyed Peas 2003 hit “Where Is the Love”, will appear on the band’s new album, “Masters of the Sun”. It will be released Oct. 12 and is their first album since 2010’s “The Beginning”.

The Grammy-winning group’s hits include “Boom Boom Pow”, ”My Humps” and “I Gotta Feeling”. They will launch their The Masters of the Sun Tour on Oct. 27 in London and wrap Nov. 18 in Dusseldorf, Germany.

Fergie, who released a solo album last year, has not recorded with the group. Representatives for the singer and the Black Eyed Peas didn’t clarify her role in the group when asked by The Associated Press. CC