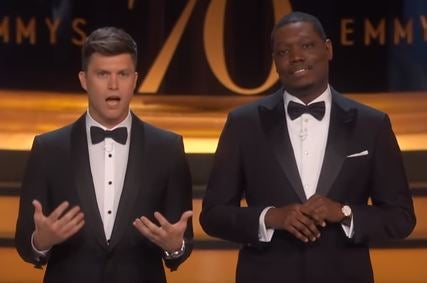 Despite being an awarding ceremony, social and political issues weren’t absent in the 70th Primetime Emmy Awards last Sept. 18, as spearheaded by hosts Michael Che and Colin Jost of “Saturday Night Live”.

The two are known for tackling serious issues on their sketch and fictional news program  “Weekend Update” in “Saturday Night Live”, so it wasn’t surprising that they didn’t veer away from topics such as racism and diversity during the Emmys.

During their opening monologue, Che (around the 6:12 mark in the video below from Television Academy via YouTube) acknowledged that television in general has always had a diversity problem. He cited ER, the medical-drama TV series that ended its 15-year run last 2009, for its lack of Filipino nurses in the cast.

“Things are getting better, but as we all know, TV has always had a diversity problem,” Che said. “Can you believe they did 15 seasons of ER without one Filipino nurse?”

“Have you been to a hospital?” added Che.

Che has a valid point, as Filipinos take up a considerable number of the registered nurses in California alone.

In 2014, it was reported that 20 percent of the registered nurses in California are Filipinos, a notably large percentage as there are only 2.3 million (officially 1.2 million) Filipinos out of the 38 million in the state.

Filipino are also still the “most persistent” job-seekers when it comes to nursing in the United States. It was reported last May that around 7,700 Filipino nurses took the U.S. license examination in 2017 from the 6,300 in 2016, with the figures up by 23 percent.

Apart from calling out Hollywood for the absence of Filipino nurses in “ER”, Che also did the same when it came to black people in “Cheers”. Che is black himself, and found it hard to believe that there weren’t any black characters in “Cheers” despite the story being set in 1980s Boston.

Che remarked, “Even on a great show like ‘Cheers’. I love ‘Cheers’ but you’re telling me they made a show about an all-white sports bar in 1980s Boston and not one black dude walked in, saw everybody and walked out immediately? I would’ve.”

Despite these gaps, Che acknowledged that television has still come a long way.

Why are there so many Filipino nurses in the US?

Filipino still most persistent job-seekers in US nursing