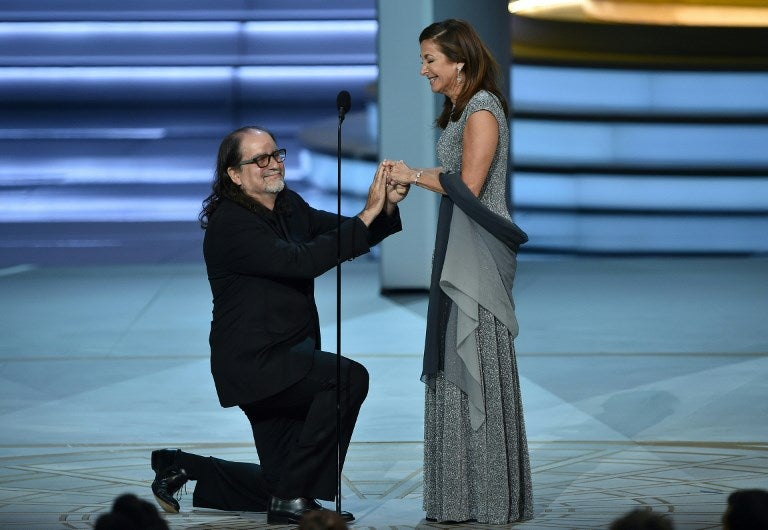 Glenn Weiss (left), winner of the Outstanding Directing for a Variety Special award for ‘The Oscars,’ proposes marriage to Jan Svendsen onstage during the 70th Emmy Awards at the Microsoft Theatre in Los Angeles, California on September 17, 2018. AFP

LOS ANGELES, United States – The Emmy Awards, television’s biggest night, provided plenty of surprises — from an onstage marriage proposal to trophies for several fan favorites — but viewers simply did not tune in, with the three-hour show plummeting to all-time low ratings.

An average of 10.2 million viewers watched the Emmys Monday night on NBC, down roughly 11 percent from the 11.4 million who watched the gala last year, according to Nielsen figures released Tuesday.

NBC tried to put a brave face on the data, noting that audiences for this year’s Oscars and Grammys were down by wider margins.

But it was difficult to spin the figures — ESPN’s Monday Night Football broadcast earned higher ratings in metered markets.

The Emmys has been bleeding viewers for years, with TV fans increasingly turning to social media to learn about the winners and watch the key moments at their leisure.

And the new host combo of “Saturday Night Live” stars Colin Jost and Michael Che did not seem to win over new fans.

Entertainment industry go-to outlet Variety called the show “lackluster,” with the hosts “failing to raise the energy of the room or even to claim the room as their own.”

Hollywood Reporter critic Daniel Fienberg called it a “bloated ‘Saturday Night Live’ episode” and slammed Jost and Che for a “flat monologue,” calling them “ill-matched to the event.”

It does seem that NBC did the right thing to move the Emmys to Monday, sparing its flagship Sunday Night Football game, which was seen by 20.7 million viewers.

The big winners at the Emmys were HBO’s fantasy epic “Game of Thrones,” which was named best drama series, and Amazon’s breakout comedy “The Marvelous Mrs Maisel,” which won eight statuettes overall. /cbb