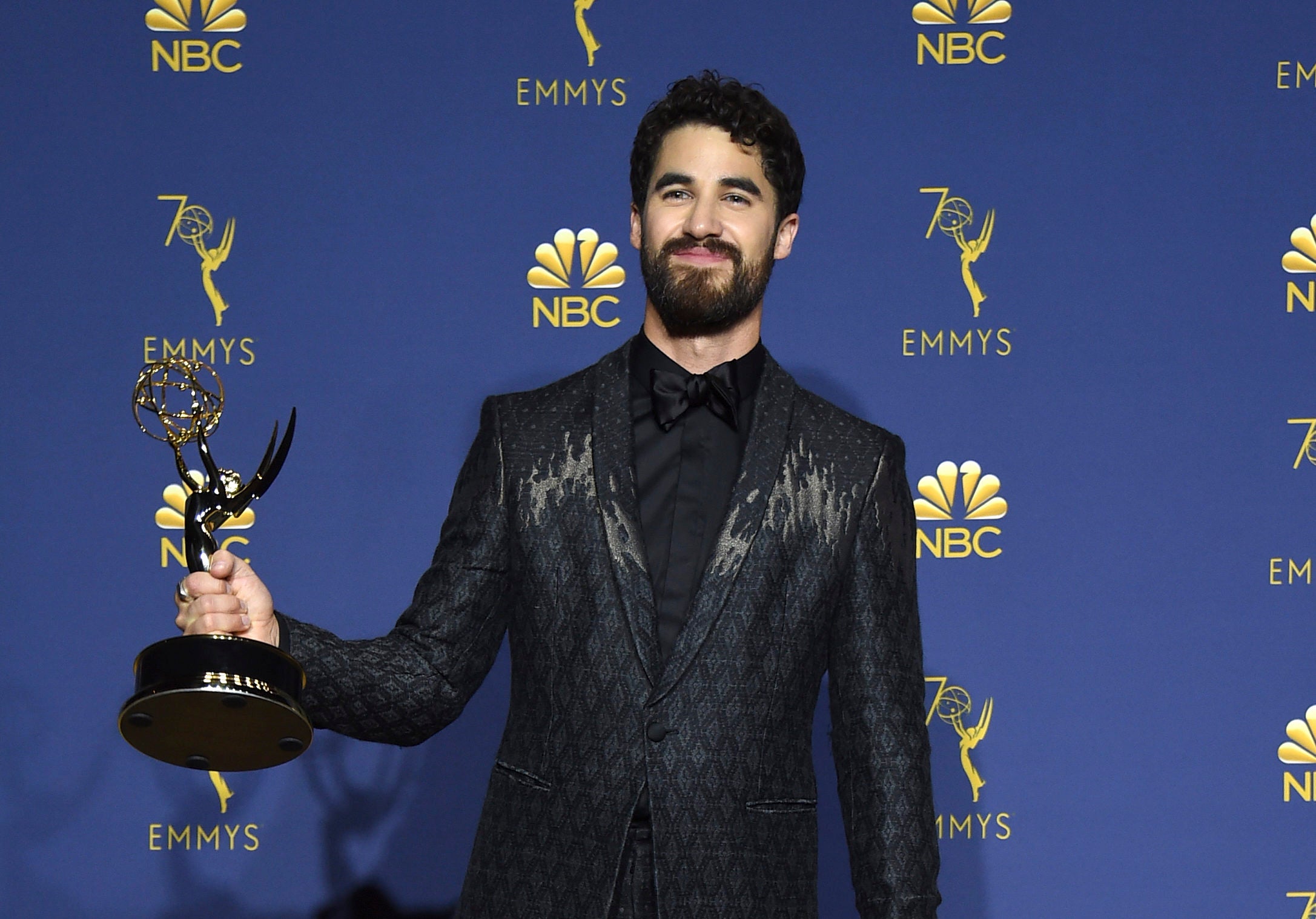 Darren Criss, winner of the award for outstanding lead actor in a limited series, movie or dramatic special for “The Assassination of Gianni Versace: American Crime Story” poses in the press room at the 70th Primetime Emmy Awards on Monday, Sept. 17, 2018, at the Microsoft Theater in Los Angeles. AP

LOS ANGELES — Darren Criss won best actor in a limited series or movie for his performance in “The Assassination of Gianni Versace: American Crime Story” in the 70th Prime-time Emmy Awards held on Monday (Tuesday morning in Manila) at the Microsoft Theater in downtown Los Angeles.

Criss, whose mother Cerina Criss is from Cebu, became the first Filipino-American to win a lead actor Emmy trophy for his widely acclaimed portrayal of Andrew Cunanan, who killed fashion designer Gianni Versace and four other men in 1997.

In his acceptance speech, Criss thanked his director, Ryan Murphy, costars and his fiancée, Mia Swier.

“You are witnessing the most extraordinary moment in my life thus far … Actors are only as good as the moments they’re given and granted. I’m so profoundly indebted to my friend Ryan Murphy for entrusting me with this opportunity of a lifetime and for believing in me,” he said.

Going into the star-studded show honoring excellence in US prime-time television, Criss was the first Filipino-American to receive a major Emmy acting nomination.

The singer-actor-songwriter earned his first Prime-time Emmy nod in 2015 when he was a nominee for best original music and lyrics for “This Time.”

He composed the song for “Glee,” where he got his first acting break as Blaine Anderson.

Before Criss’ historic triumph, only two Asian actors have won Prime-time Emmys. Riz Ahmed clinched the best actor in a limited series in 2017 while Archie Panjabi received the best supporting actress statuette in a drama series in 2010.

This year, Sandra Oh also set an Emmy milestone as the first Asian actor to be nominated for  best actress in a drama series for “Killing Eve.”

In 2016, Fil-Am Lou Diamond Phillips was nominated for best actor in a short form comedy or drama.

Criss won raves from critics for his depiction of Cunanan, who was a Filipino-American like him.

Based on Maureen Orth’s book, “Vulgar Favors: Andrew Cunanan, Gianni Versace, and the Largest Failed Manhunt in US History,” “The Assassination of Versace” earned the most nominations with 18 overall, including nine in the Prime-time Emmys.

In nine episodes, Criss and Edgar Ramirez enacted the life journeys of Cunanan and Versace, respectively, until the tragic day on July 15, 1997. Cunanan shot and killed Versace in front of his mansion in Miami Beach, Florida.

Criss elicited glowing reviews for his transformation as Cunanan—from a bright high school student, the son of a Filipino-American father and an Italian-American mother, who grew up in the San Diego area, to a spree murderer who killed himself eight days after fatally shooting Versace.

According to Murphy, one of the reasons he cast Criss was that he is half-Filipino as Andrew Cunanan was. Criss, whose father Charles William Criss is of Irish heritage, noted the irony that he won plaudits for essaying the true-to-life story of a Fil-Am who was on America’s most wanted list.

“It’s a very strange irony,” remarked the actor who was raised in San Francisco where he began acting early in theater.

“It’s not beyond me how twisted it is that this very exciting moment in my career … that this is directly linked to something horrible that really happened and if it wasn’t for a lot of this destruction, would I be having this conversation? The answer is no … It’s the first time I’ve ever played anybody who was close to my (heritage).”