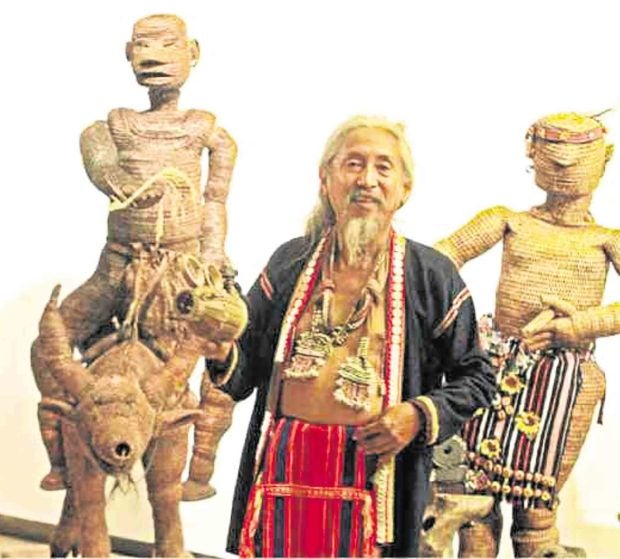 He is not known as Kidlat Tahimik for nothing.

Days before the arrival of Typhoon “Ompong,” the indie filmmaker was hard at work in an editing room in Baguio City, polishing his latest work, “Lakaran ni Kabunyan”—one-third of the trilogy “Lakbayan,” which he shares with two other internationally acclaimed filmmakers Lav Diaz and Brillante Ma Mendoza.

“Lakbayan,” which is set to premiere at the Busan International Film Festival next month, depicts yet another odyssey—a recurring theme in Kidlat’s works—this time, featuring his son Kabunyan de Guia’s travels from Luzon to Mindanao.

Kidlat himself will embark on another journey after Busan—to Amsterdam, the Netherlands, to receive his latest accolade, the Prince Claus Award, in December.

“I might need to go down to Manila soon, to fix my travel papers,” he told the Inquirer in a phone interview.

He described this latest honor as “a nice pat on the back.”

The Prince Claus Award is bestowed on people and groups in Africa, Asia, Latin America and the Caribbean, for “outstanding achievements in culture and development.”

“I believe I got this prize for my work as a cultural warrior,” remarked Kidlat, who is recognized for his contributions to film and the visual arts.

Kidlat’s fellow honorees come from countries as diverse as Uganda, Syria, Indonesia and Brazil, and from disciplines as varied as theater, architecture, literature and journalism.

According to Kidlat, he has been fighting “for the past 20 years,” the persistent erosion of our cultural heritage, as a result of the tidal wave of colonialism and, later,

The Prince Claus website hails Kidlat, dubbed as the Godfather of the Filipino New Wave, as “an enthusiastic advocate of indigenous culture.”

The site notes: His “unconventional artworks—which range from film and photography to weaving, free-style architecture and carved installations—raise awareness about environmental issues.”

He is also commended for “mentoring young creatives and promoting independent creativity in workshops.”

The esteemed artist, however, was the first to acknowledge: “I wouldn’t advise my students to follow in my footsteps and be another Kidlat.”

The eternal outsider asserted that he wouldn’t be disappointed should young people decide “to join the movie industry and change the system from within.” He firmly believes each person should follow his or her own path and find his or her sariling duwende.

The present batch of filmmakers sparked hope in Kidlat. He is glad that “the producers behind ‘Goyo: Ang Batang Heneral’ dared to produce a film on history. Let’s give the youth the kind of films they deserve… not just movies on sex and violence and other formulaic stories.”

He traveled all the way to Manila to watch the film on the Philippine revolution. (He refused to view it in a mall in Baguio, as a matter of principle, but that’s another story.)

As he gets older, he confessed, he is content “to just pursue his art and advocacies.”

Now, he busies himself with (among various projects) his version of an anti-mall, the Ili-Likha Artists’ Watering Hole near Session Road. The center is envisioned as “a multilevel establishment built around overgrown trees and wooden structures … to promote the humble nature and culture of Baguio” and provide a space where artists can converge.

Kidlat, a former economic researcher, insisted: “I had to de-MBA my thinking.”

A businessman always thinks of the bottom line, he explained, while an artist is not bound by such restrictions. “I flow with Bathala-na. I trust in the cosmos. An MBA is trained to ‘stay on track’ (remain focused until you’re a Bill Gates). After I tore my Wharton diploma (the MBA mindset was like a straitjacket), I allowed myself to ‘stray on track’ … trusting my sariling duwende’s GPS to reach the finish line.”

He added, jestingly: “In Baguio, we’re praying that Ompong will ‘stray offtrack’!”