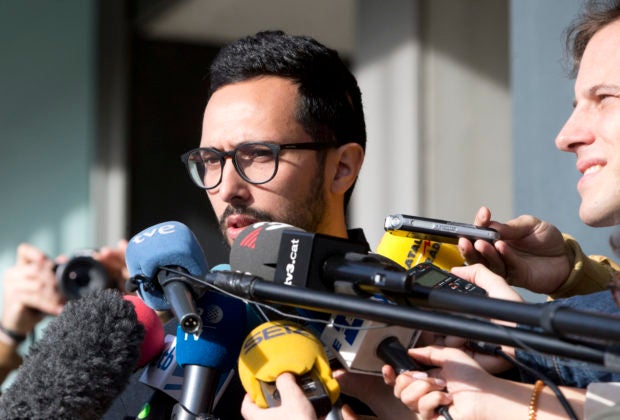 Spanish rapper Jose Miguel Arenas Beltran, also known as Valtonyc, speaks with the media as he leaves the courthouse in Ghent, Belgium, Monday, Sept. 17, 2018. A Belgian court has ruled that Spanish rapper Valtonyc should not be sent back to Spain, where he was sentenced to prison accused of writing lyrics that praise terror groups and insult the royal family. Image: AP/Virginia Mayo

GHENT, Belgium (AP) — A Belgian court on Monday ruled that Spanish rapper Valtonyc should not be sent back to Spain, where he was sentenced to prison accused of writing lyrics that praise terror groups and insult the royal family.

The rapper, whose real name is Jose Miguel Arenas Beltran, was supposed to turn himself in voluntarily in May to authorities in Spain, where he faces prison sentences totaling three and a half years, but instead fled to Belgium.

“The judge has decided there will be no extradition and discarded all three charges,” his lawyer, Simon Bekaert, told reporters near the court in the city of Ghent.

“I feel good, I am happy. But I am sad for the people in Spain, who unlucky, they don’t have justice like me here,” Arenas told reporters, in English.”

The ruling could re-ignite tensions between Belgium and Spain over extradition demands.

Late last year, Spain dropped a European arrest warrant against former Catalan leader Carles Puigdemont after it became clear that Belgian justice authorities were unlikely to recognize some of the Spanish charges against him.

Valtonyc’s case became a cause celebre in Spain among organizations who claim Spanish authorities are cracking down on free speech.

The 24-year-old rap singer and composer from Palma de Mallorca was sentenced to prison over songs deemed to have praised terror groups, threatened a Spanish politician with violence and insulted the royal family.

During his trials in Spain, courts ejected Arenas’ argument that the point of rap lyrics is to be provocative and should be protected by free speech laws.

Rights organizations and activists regarded Valtonyc’s as a case in point of a wider legal and political dispute over freedom of expression, rebuking the way prosecutors have over-reached in using the criminal code to punish anyone who “glorifies terrorism” or insults the Crown.

The political conflict over Catalonia’s attempt to secede has also challenged the limits of free speech, with pro- and anti-independence supporters currently battling for public space in the northeastern region to put up symbols in support for imprisoned separatist politicians — or to take them down.

The European Court of Human Rights has also rebuffed the Spanish judiciary for protecting the royal family and sided earlier this year with two Spaniards who set fire in public to a photograph of King Felipe VI and Queen Letizia. The court argued that their protest amounted to freedom of speech. CC