‘Game of Thrones’ battles with ‘Handmaid’s Tale’ for Emmys glory 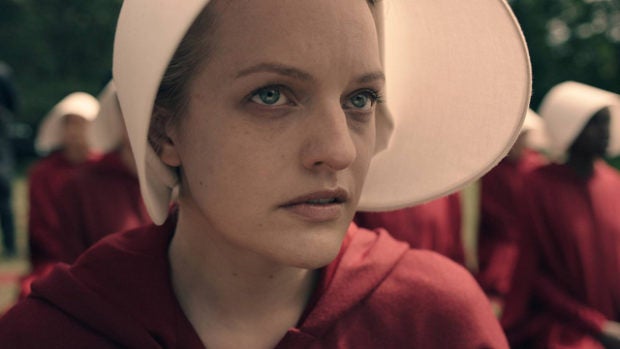 Hollywood’s top television stars will strut their stuff on the red carpet Monday at the glittering 70th Emmys Awards — a duel between record-breaker “Game of Thrones” and last year’s big winner “The Handmaid’s Tale”. Image: Hulu via AFP

Hollywood’s top television stars will strut their stuff on the red carpet Monday at the glittering 70th Emmys Awards — a duel between record-breaker “Game of Thrones” and last year’s big winner “The Handmaid’s Tale”.

Both shows have already picked up some Emmys hardware: HBO’s blood-spattered smash hit won seven statuettes in technical categories at the Creative Arts Emmys a week ago, while Hulu’s “Handmaid” scooped up three.

And both are likely to add to that haul at the Primetime Emmys, television’s answer to the Oscars, at the Microsoft Theater in downtown Los Angeles.

But will “GoT” — which was ineligible last year — reclaim the best drama series throne, or will “Handmaid” — the first streaming series to take the coveted prize — be a repeat winner?

For Tim Gray, the awards editor and senior vice president of top entertainment news outlet Variety, “Handmaid” — a bleak portrait of a future dystopian America where women are brutally oppressed — has the edge.

“I just feel like ‘Handmaid’s Tale’ is, kind of, of the moment as it addresses a lot of concerns that people have now,” Gray told AFP. “I just think it’s their year.”

The show, based on Margaret Atwood’s 1985 novel, seems especially timely in the age of #MeToo, a movement that erupted shortly after last year’s Emmys.

Others in the best drama race include dark horse pick “The Americans” — the gripping FX thriller about Soviet sleeper agents in the United States that has been a favorite of critics and fans, but not the 22,000-plus Emmy voters, for years.

HBO’s futuristic western “Westworld”, Netflix favorites “The Crown” and retro sci-fi mystery “Stranger Things”, and NBC family saga “This is Us” round out the field.

On the comedy side, FX’s “Atlanta” — a quirky look at the rap scene in the Georgia capital — is squaring off with Amazon’s “The Marvelous Mrs Maisel” for top honors.

In 2016, “Game of Thrones” — the tale of noble families vying for the Iron Throne — made history, picking up 12 awards and becoming the most decorated fictional show since the Television Academy first handed out prizes in 1949.

With its seven Creative Arts Emmy statuettes this year, “GoT” — which will return in 2019 for an abbreviated eighth and final season — now has 45 Emmys overall.

On Monday, beyond the best drama trophy, cast members Lena Headey, Nikolaj Coster-Waldau and Peter Dinklage are nominated, along with the show’s directors and writers.

But “Handmaid’s Tale” is also well placed in the acting races, with last year’s winners Elisabeth Moss and Ann Dowd again in the running.

Other major contenders include FX’s “The Assassination of Gianni Versace”, which racked up 18 nominations.

Darren Criss is the favorite to win the star-studded race for best actor in a limited series or movie for his searing portrayal of Versace’s killer Andrew Cunanan — but the field also includes Antonio Banderas and Benedict Cumberbatch.

In the emerging battle of traditional networks vs new platforms, streaming giant Netflix ended HBO’s 17-year streak of leading the Emmy nominations, with 112 to the premium cable network’s 108.

Another major contender is veteran comedy sketch show “Saturday Night Live”, just behind “GoT” with 21 nominations.

Show regulars Michael Che and Colin Jost will host the Emmys, to be broadcast on NBC, and series creator Lorne Michaels will produce the event for the first time in 30 years.

With awards show audiences dwindling in the age of Twitter, can the “SNL” team breathe new life into the format?

Jost has said he wants the Emmys to be “less political than normal” — but that seems unlikely only a week after CBS chairman and CEO Les Moonves left in a cloud of sexual misconduct allegations.

Emma Watson hides copies of ‘The Handmaid’s Tale’ in Paris