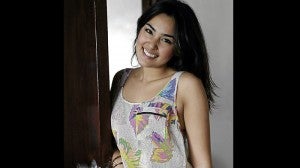 Gwen, or Gwenalle Tasha Mae Pallera Agnese, was born in Australia to a French father and a Filipino-Vietnamese mother. She moved to the Philippines when she was 6.

When she turned 14, the family left for Singapore and stayed there for a year. Then they lived in Thailand for two years.

Gwen went to Beijing to work as a teacher’s assistant/drama teacher for six months, before heading back to Australia. There she stayed for eight months.

She’s based in Manila now.

“When I was younger, my mom would send me to France every summer,” she told Living Stars during a visit to her Makati condo. “When I came home, I’d look totally different—from wearing baggy pants, for instance, I’d be in skinny jeans and ballerina shoes.”

She’s a “mood dresser,” Gwen confessed. “Sometimes I look super girly, but I can also dress up as a rocker or a hippie.”

Her cousin Anna, who helps shop for the actress, said Gwen prefers the “rugged look” most of the time: “When she was younger, she would braid rubber bands and use them as bracelets. She likes black shirts. At age 13, she cut her hair and dyed it black. These days, I can say I’m quite successful in infusing color into her.”

Gwen added: “In first year high school, I started shaving my legs and wearing short shorts. There was a time when I had ‘emo’ bangs—and saw the world through one eye. But I still had good grades and my teachers loved me.”

I have so many shorts, but the tattered pink pair is what I wear again and again.

I’m into lacy tops, like the light-green piece from Top Shop. The fabric is see-through but it doesn’t look too revealing.

I like my MC Hammer pants, too, which I wear to tapings or out-of-town shows because they’re so comfy.

I wore the fleece jacket in China because it gets really cold there. It’s thick but not bulky.

The pair of denim pants is one of the first editions from Cheap Mondays. It used to be super black, now it’s gray. I remember when I bought it: The shop was in the middle of nowhere in Paris and had fake rats dangling all over. Everyone said the best pants were sold there.

COMFORT is key to finding the best footwear. Photo by August dela Cruz

I love flats. I wear high-heels only for events. Mario D’ Boro provides most of them for me, but I also like Aldo, Nine West and Schu. Comfort is key. When I try on shoes, I make sure I’m able to walk, jump and hop.

I love boots, too. I have about six pairs. The combat boots are from Zara, the only place where you can find nice boots. I also like to wear gladiator sandals because they’re comfy and versatile.

I have loafers because I’m French (we all need loafers). This pair from Vans is perfect when I attend workshops or go to tapings for (the GMA 7 gag show) “Bubble Gang.”

My bags are mostly hand-me-downs from my sister Thea, although I also bought a few with my own money, like the Louis Vuitton. I’m very particular about the materials. Most of my bags are very old but they’re still in good condition. A bag is really an investment. Buy bags even if they are slightly expensive, because they will last you a long time.

THE LV wallet is a friend’s gift. She’s now using the Prada piece she bought for herself. Photo by August dela Cruz

My watches are like most of my bags—they’re from my sister. I’ve bought only a few pieces for myself. Most are big and boyish, like the Armani, Kenneth Cole, Philip Stein, Technomarine, Aldo and Panerai. It’s really best to get those that don’t need batteries.

The hairbrush from Acca Kappa is the only one I use. I don’t brush my hair a lot—just once a day, and about five strokes… and only while it’s wet. My hair is wavy. If I comb it often, it has a tendency to become too dry and frizzy.

I use accessories depending on what I’m wearing. For example, if I’m in a simple dress, I go for flashy bangles or earrings. I also blend them with my make-up. Call me OC (obsessive compulsive), but they have to go with my scent, too.

My cousin Anna shops for me. For instance, she bought the bracelets from Bangkok and the colorful head bands. A friend got me earrings from H&M in the United States. I can go extreme with earrings—I want them big, although sometimes I use only simple pearl studs.

BRANDS that work for her: Smashbox, The Bomb and Maybelline. Photo by August dela Cruz

I use Smashbox for my eyes. Instead of buying small palettes, I got the big one so I saved a lot of money. For powder, I use The Bomb because my skin is easily irritated. The one I have is antishine. I have another for contouring. My bronzer is by Sheer Cover, an Australian brand.

I have really long eyelashes. If I don’t curl them I look sleepy. I still curl even if I don’t put make-up on. For mascara, I use Maybelline.

I don’t really wear lipstick because I look matapang with it. If I have to, I use a nude shade by Chanel that my mom bought for me.

I have very dark eyebrows so I also have a brow set from Beagle.

I prefer floral or boyish scents, like Diesel’s Summer Edition. I also use Tous Touch by Tous because its citrus-y. But my favorite is Marc Jacobs’ Daisy. I’ve finished four bottles already. I wear scents depending on my outfit for the day. If my dress is girly, I wear something sweet. If I’m outfitted like a rocker chic, I use the musky type.

I like playing Sims on my Wii (game console), especially during tapings for “Spooky Nights (Snow White Lady and the Seven Ghosts).” It makes waiting on the set bearable.

I use my MacBook a lot. I got it when I took film and media studies in Australia, and it has been very useful. I still keep my first iPod. My parents gave it to me when we were living in Singapore, after I got good grades and graduated with honors. I got my iPad for myself. I use it during tapings for games, tracking down my calendar… everything.

I have two BlackBerry phones. It’s user-friendly and has BBM (BlackBerry Messenger). I have a lot of friends abroad who are into BBM, too. Even my dad and sister are using BBM.

I bought an Olympus underwater camera from my cousin. I like taking pictures but I see no point in investing in an expensive camera. The Olympus is good enough for taking funky pictures.

The book “21st Century Art Assertionism” was a gift from friends when I worked as a teacher’s assistant/drama teacher in China.

“Chambers Film Factfinder” (by Camila Rockwood) is a dictionary about film. It’s very useful because I like reading about directors and terminologies.

I stole Paulo Coelho’s “The Alchemist” from my cousin. I want to read it because friends kept telling me it’s the best book that Coelho has written.

You gotta have “Cranial.” When I have friends over, we really get into this game. My dad barges into my room sometimes, wondering why we’re all screaming.

An advice to girls my age: Don’t wear too much make-up. It takes away your natural beauty. You don’t need to spend that much, either. There are good brands that are inexpensive.

GWEN started painting at 9. She does installations now. Photo by August dela Cruz

I started painting in 2000. The ones I have here in Manila are old ones. I have nicer and newer pieces in Thailand. They are probably as big as the wall in my bedroom, and they each have a story. I intend to paint again. The problem is time and space. I like them big. I like to be able to walk on my paintings.

I first tried painting when I was 9. I copied it from a picture book. The strokes are nice but I made a mistake with the lines, sobrang magulo. My painting of a lotus was copied from an old menu of Philippine Airlines.

Read Next
Newcomer gets ‘Amaya’ lead
EDITORS' PICK
Notice of 2020 regular meeting of stockholders June 18, 2020
SM prepares for ‘safe malling’
Leveling up your ‘lutong bahay’ with the kitchen companion you never knew you needed
NBI, Immigration to join hunt for ‘underground’ medical clinics
2 Chinese nationals arrested in raid on another unlicensed COVID-19 hospital in Pampanga
P2.2 trillion in losses: Cost of COVID-19 impact on PH economy
MOST READ
NCR is ready for GCQ — Palace
Revillame tells Roque: ABS-CBN is in my heart despite being in rival network
Filipino kids in Ireland orphaned due to COVID-19
Metro Manila mayors told: Keeping bus, jeepney ban ‘catastrophic’
Don't miss out on the latest news and information.