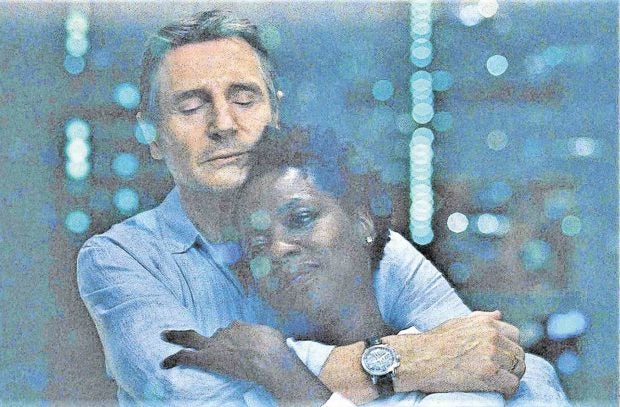 Davis with Liam Neeson in “Widows”—PHOTO FROM FOX

LOS ANGELES–Filming a bed scene with Liam Neeson in the film “Widows” was “absolutely terrifying,” her Fil-Am costar Conrad Ricamora in the TV series “How to Get Away with Murder” is “awesome,” and her TV production company will spotlight Asian, Hispanic and black stories.

Those were among the updates we got from Viola Davis when we interviewed her recently in Toronto.

Complimented about looking glamorous in a red suit and black blouse, the Oscar and Golden Globe-winning actress laughed as she said, “If you see me in my real life, you would not say that, trust me. I never found my glamorous Viola. My beautiful hair and makeup team of Autumn Moultrie and Jamika Wilson created this.”

Asked about the new season of “How to Get Away with Murder (HTGAWM)” which premieres on Sept. 27, Viola answered, “I can’t tell you anything … You know everything is a mystery.”

“We’re starting the fifth season,” added the Juilliard alumna on the legal thriller for which she won a 2015 Primetime Emmy best actress in a drama series trophy.

“It’s a new mystery,” she continued. “I continue to enjoy Annalise because, once again, I feel like it’s an African-American woman who’s just being written for. I don’t care if people don’t see her as realistic. There are many facets to her personality.”

On “Crazy Rich Asians,” Viola said, “I have not seen it because I have no time. I have no life.”

But she plans to put out Asian, Hispanic and African-American content via her TV production company.

“My production company, JuVee Productions,” she pointed out, “… [is] committed to inclusion in telling stories, where people of color are included in the narrative and investing in emerging artists who are out there, who have a voice, who have a story. 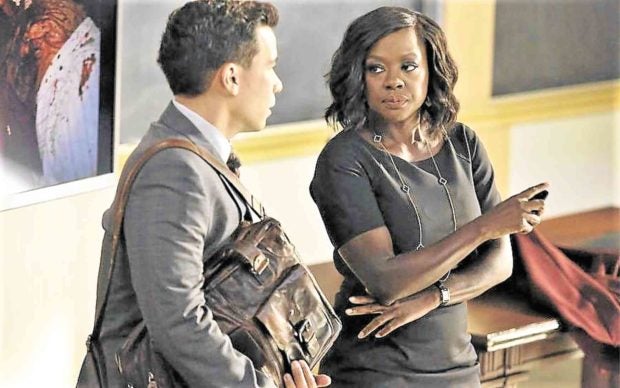 “Andrew Wang is the head of our television department. He came into our company because he came from creating original program for Bravo. He was being seen as an Asian man who was gay. He felt our company was a way of getting those voices heard because our world is changing and people want to see themselves.

“People want to be seen, and that’s certainly true of Asian stories. We have a lot of narratives that are rooted in Asian cultures, great stories that include Asian writers and actors who just want to work. They just want to be a part of great characters. Then, we also have great stories with Hispanics and blacks.”

In director Steve McQueen’s “Widows,” she plays Veronica, who leads a group of four women. They attempt a heist after their criminal husbands are killed in a botched job.

With nothing in common except debt left behind by their thug husbands, the women find kinship in order to survive. Liam Neeson, Michelle Rodriguez, Elizabeth Debicki, Colin Farrell, Robert Duvall and Cynthia Erivo round out the cast.

Viola relates to the bond that the four women in the crime drama eventually forge. “When I’m around women, it’s easier to explain myself. I find myself overexplaining with men.

“It’s also harder as a person of color to explain myself in a group of people who are Caucasian because my experience is so specific.

“It’s like wearing my natural hair in a film. That may sound like it’s nothing because people wear their natural hair all the time. But very often, black women wear weaves or wigs. They wear anything that assimilates themselves into a culture where beauty standards are very rooted in white culture. 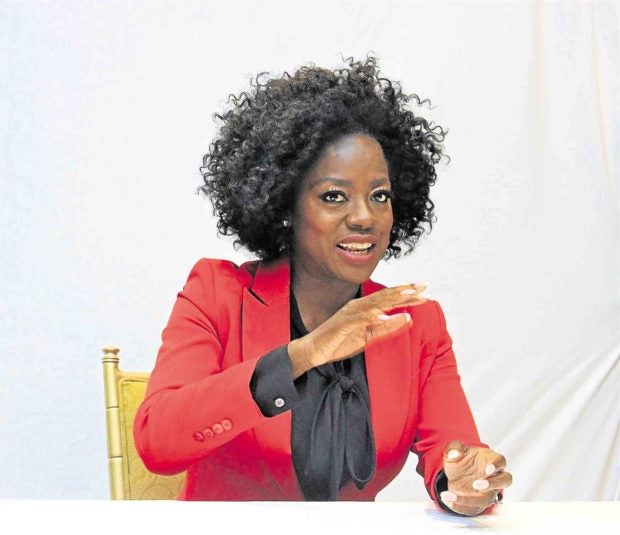 “So, when you find yourself in any movie where you’re playing anyone’s romantic interest, you feel like you’ve got to change your hair. It’s a big thing among black actresses in Hollywood, especially when you have darker skin. So for Steve McQueen to say, ‘I want you to wear your (natural) hair,’ people don’t understand how huge and cataclysmic that is.

“So there I was in bed with Liam Neeson, wearing my natural hair, being 53 and dark. It’s like what Steve said, ‘Viola, this woman exists. I see her all the time. In Europe, I see her in airports. I see her with a white husband who’s Irish, who’s whatever. She just hasn’t been introduced to the American cinema, so it’s about time we introduce her.’”

Told that Liam looked so blissed out in that bed scene, Viola laughed as she quipped, “Well, he should be!”

But Viola was apparently not as relaxed as Liam was.

“It was absolutely terrifying, to tell you the truth,” she admitted. “He was cool. He was like, ‘OK, where do you want me to be? Do you want me to take my clothes off?’ He was like, ‘I’m ready to do it all.’ He was very respectful, great, an elegant gentleman, everything you could possibly imagine.

“It’s different for me to do anything that intimate and sort of sexualized onscreen. I am used to playing maids and drug addicts (laughs), so it cost me something to be that vulnerable. You’ve seen a lot of sex scenes onscreen that have been way more graphic, but when I approach any kind of scene in that nature, it’s very private and you’re looking in on it.

“When you approach it as private, it’s very frightening because I have to love him, with the touching, the closeness and the kissing is coming out of love and needing him, especially after the loss of a child. I felt like I had to really establish that and make people believe it. So then, you understand the stakes of the betrayal at the end.

“I was terrified and especially when you have cameras on you and Steve McQueen saying, ‘It’s got to be lustier (laughs)! You have to open your mouths more!’ Anyone who says a scene like that is fun and it’s not frightening, I wonder what it has cost them. Every time you act, it costs you something. Every time you put yourself out there, it costs you and that scene certainly cost me something.

“I’m raising my daughter to be authentic and be true to herself,” she replied when asked about Genesis Tennon, whom she and her husband Julius Tennon adopted when she was a newborn in 2011. “I discipline her, but I don’t break her down.

“It’s very important for her to have vulnerability because that’s what’s going to serve her in her friendships, marriage or any personal relationships.

“One of the main things I tell my daughter because she’s almost 5 feet tall and she’s only 8 years old—she’s cute—but what I’m having her focus on is, looks is not a value. The world may see looks and money as a value, trust me, but your value is in your heart, in your head.”