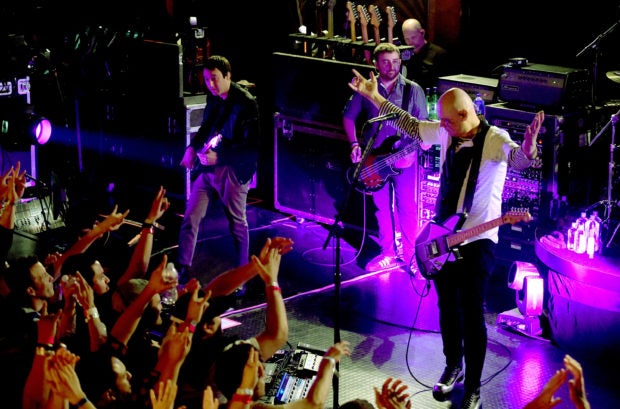 NEW YORK — Nearly two decades after an acrimonious split, the classic lineup of Smashing Pumpkins on Friday announced it had recorded a new album together.

The alternative rock icons led by the piercing voice of Billy Corgan said the album —  titled, in one of the band’s characteristically unique turns of phrase, “Shiny and Oh So Bright, Vol. 1 / LP: No Past. No Future. No Sun.” — will be released on November 16.

The band also released a new single from the album, “Silvery Sometimes (Ghosts),” a harmony-rich guitar track that recalls the more accessible pop sound embraced by the Pumpkins in the late 1990s.

The announcement came after Corgan reunited with fellow guitarist James Iha and drummer Jimmy Chamberlin for the first time since 2000 for a tour focused entirely on the band’s biggest hits.

Corgan, the undisputed face of the band, had kept recording as Smashing Pumpkins since 2000 but with a new cast of musicians.

Notably absent from the reunion is bassist D’arcy Wretzky, who has had an especially tense relationship with Corgan and struggled with drugs.

Wretzky has berated Corgan for seeking to bring her back into the band, accusing him of needing money after his project of launching his own professional wrestling league flopped.

The reunited Pumpkins earlier released another song that will appear on the album, “Solara,” fueled by metal-like guitar power chords.

The Chicago band recorded the new album with veteran producer Rick Rubin, who came to prominence working with the Beastie Boys before collaborating with a slew of leading hip-hop, metal and pop artists.

Smashing Pumpkins was one of the most successful bands of the 1990s boom in alternative rock, adapting a sound rooted in hardcore punk and metal by incorporating symphonic strings and electronica.  /kga