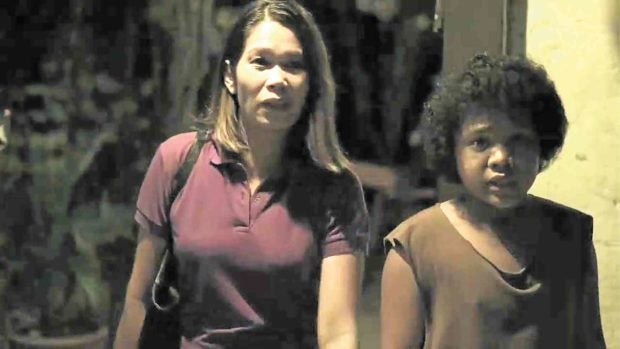 Pokwang, lead actress in the dark comedy film “Sol Searching,” believed in the project so much that she even volunteered boyfriend Lee O’Brian to be part of its cast, according to director Roman Perez Jr.

“Sol Searching” is an entry in the ongoing 2018 ToFarm Film Festival, which ends on Sept. 18.

“She is so dedicated to the film that she even asked Papang (Lee) to have a cameo, as well as her friends. Sadly, our shooting days were in conflict with their schedules,” Roman told the Inquirer. Comedian Chokoleit, however, managed to do a cameo.

Pokwang waived a huge percentage of her talent fee, said Roman; so did comedian Joey Marquez, who portrays her husband in the movie.

Theater actress Gilleth Sandico plays Sol, a public school teacher. She dies unexpectedly and none of her relatives can be contacted. Her coffin is left only to her friend Dolores (Pokwang) and a student named Bugoy (JM Salvado), who go on a road trip to find a place where Sol can have a decent funeral.

“This is actually a story that happened in Caloocan,” explained Roman.

JM said he first thought Pokwang was a snob, but this changed shortly after they began filming. “She’s actually kind and very approachable. She would sometimes bring food to the set,” said JM. “I enjoyed working on this film because we’re all just happy and chill.”

Roman said he was thrilled that “Sol Searching” has finally found a venue in ToFarm. “We previously joined two film festivals, got shortlisted, but didn’t make the cut. This story will finally be told through ToFarm,” he beamed.

Meanwhile, director Hubert Tibi said he didn’t think his film titled “1957” would be included in this year’s ToFarm lineup. After all, there were a total of 119 submissions and Hubert only worked on his script for a day and it was initially only 27 pages long.

The director, however, said he was able to convince the festival’s screening committee he would be able to finish the project with the given budget. Each finalist received a grant of P1.5 million from ToFarm founder and chief advocate Milagros O. How.

“My dad and sister were on a trip to Iriga City (in Camarines Sur) when inspiration struck me. I was getting bored in the parking lot so I stepped out, saw the beautiful mountains and got the idea for a story,” he told the Inquirer.

“1957” is a historical drama set in Bicol, where farmers pin their hopes on genuine land reform with the much-anticipated arrival of then President Ramon Magsaysay.

“I saw that ToFarm’s theme this year is ‘Parating Na,’ so I included the element of Magsaysay in my film. Its tagline is ‘hope is what keeps us moving forward,’” Hubert explained. “The film will show the way of life of farmers and tackle farming and harvest processes, as well as how they cope during both the wet and dry seasons.”

Hubert said he was pleased with his cast, especially Ronwaldo Martin, who plays the lead character Lucio. “The script is very simple. I just told him to act natural as a farmer. He was able to achieve what I wanted,” he said.

Filming ran smoothly, too, Hubert said. “It was well-planned. I initially scheduled six days of shooting, but we finished it in five.”