There is life after Justin Bieber 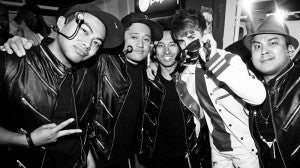 The pop idol and his Legaci

After two years of singing and touring with the phenomenal Justin Bieber, the Legaci is coming into its own.

The group released its first single, “All Day,” in December and is recording its first album since parting ways with Justin after his My World Tour in October. The album is due for release in the spring.

“We are still open to performing with Justin. We like Justin and he’s a good guy to tour with,” said Micah Tolentino, founder and business manager of Bieber’s former backup band.

Legaci provided back-up to Bieber in a style the group characterized as “richly harmonious and soulful.”

The oft-told story of how Bieber and his manager discovered them on YouTube was recounted to The FilAm by lead vocalist Chris Abad.

“Our style is based on our musical influences such as Boyz II Men, Brian McKnight, Stevie Wonder, and Jodeci. Just trying to bring back that soulful, feel-good vibe of music that we grew up listening to. The cool thing is that one of Justin’s favorite artists is Boyz II Men so I’m sure that played a factor in their interest for us,” he said.

Before they knew it, they were asked to join the pop star’s $80-million tour that took them to 30 countries — the Philippines included.

It was an unforgettable experience for Micah, Chris, Jason Atencion and Del Lazaro. They witnessed first-hand how a rising Canadian singer skyrocketed to global fame. More than that, they got to share the stage with him.

“It’s a dream come true for Legaci,” said vocalist Jason. “We’ve been to 30 different countries performing for thousands of screaming fans. We just want to show the world how talented Filipinos are.”

It was their YouTube version of Beiber’s “Baby” that caught the attention of the star and his manager, said Chris.

“So when Justin and (his manager) Scooter noticed our video, it was a complete surprise to us. Very blessed,” he said.

“Our performance at the Mall of Asia in the Philippines was the most memorable,” said Chris. “Performing in front of all of our kababayans was an exhilarating experience. It was our first-ever performance in our homeland, so it really meant a lot to us.”

Asked if they’ve met Bieber’s girlfriend Selena Gomez, Micah said: “Yup. She came, gave a surprise performance at our concert in Brazil.” They learned the lyrics to her hit song “Who Says” that same day and sang back-up for her as well.

“She was really friendly and down to earth,” he said.