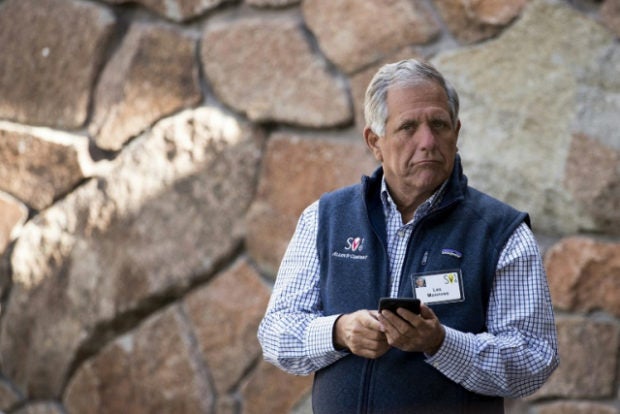 US television giant CBS announced Sunday the immediate departure of powerful CEO Leslie Moonves, one of the biggest scalps in the #MeToo era, following a slew of escalating sexual misconduct allegations.

Moonves, who transformed the corporation into the most watched television network in the country, was one of the most respected executives in Hollywood until he was first publicly accused.

Two articles published by The New Yorker — on July 27 and on the day that his departure was announced — detailed allegations against the 68-year-old television titan from 12 different women.

CBS subsequently declared that he would depart as chairman, president and CEO “effective immediately,” and that he and the network would donate $20 million to supporting the #MeToo movement and equality for women in the workplace.

“The donation, which will be made immediately, has been deducted from any severance benefits that may be due Moonves,” CBS said.

The disgraced CEO will not receive any compensation, pending the results of an investigation into the allegations against him being conducted by two blue-chip law firms, the corporation announced.

“Any payments to be made in the future will depend upon the results of the independent investigation and subsequent board evaluation,” CBS announced in a statement.

Moonves’ departure had been widely expected, with US media reporting that the terms of his exit had been under negotiation for weeks, and a deal had been anticipated before markets open Monday.

At least one report had suggested that he could get a golden handshake of $100 million in stock.

One of his accusers, Jessica Pallingston, told the Pulitzer-winning journalist Ronan Farrow, who broke the allegations against Moonves in The New Yorker, that such a payoff would be “completely disgusting.”

CBS announced that chief operating officer Joseph Ianniello will be president and acting CEO, overseeing all operations of the company, while the board searches for a permanent successor.

Along with Moonves’s departure, CBS said it had agreet to settle a lawsuit with National Amusements pending in Delaware that would appoint six new independent directors to the board.

The deal upheld the control of the Redstone family, whose members control an 80 percent voting stake in CBS, who agreed to drop — for at least two years — a proposed merger with the Viacom group.

In July, Farrow’s first bombshell report detailed sexual harassment allegations from six women and complaints from dozens of others about a culture within the company tolerating sexual misconduct.

While CBS appointed a team of lawyers to investigate, there was outrage from some advocates that Moonves was kept on the job.

On Sunday, The New Yorker published allegations from another six women, who said that Moonves sexually harassed or assaulted them between 1980 and the early 2000s.

They included claims that Moonves forced them into perform oral sex, exposed himself to them without their consent, and that he used physical violence and intimidation against them. Some of them also said Moonves retaliated after being rebuffed, damaging their careers.

One of the women, television executive Phyllis Golden-Gottlieb, filed a criminal complaint last year with Los Angeles police. The New Yorker said that while police found her allegations “credible” the alleged incidents happened too long ago to prosecute.

Moonves told the magazine that three of the encounters were consensual.

“I have never used my position to hinder the advancement or careers of women,” he said.

“In my 40 years of work, I have never before heard of such disturbing accusations. I can only surmise they are surfacing now for the first time, decades later, as part of a concerted effort by others to destroy my name, my reputation and my career.”

Since joining CBS in 1995, Moonves transformed the corporation into the most watched television network in the country and one of the media industry’s best-performing businesses.

He was promoted to president and CEO of CBS Television in 1998, and became chairman in 2003.

Moonves worked previously at Warner Bros. Television, where his team developed hit shows such as “Friends” and “ER”.

A one-time actor, he is father to four children. His second wife Julie Chen stood by him after the accusations first surfaced.

Farrow shared a Pulitzer Prize with The New York Times for his reporting on Harvey Weinstein, which galvanized the #MeToo movement to quash pervasive sexual harassment in showbiz and other industries.

At Cannes, a #MeToo upheaval up and down the Croisette

Want proof? Palace to be given probe findings on PhilHealth corruption claims — Sotto