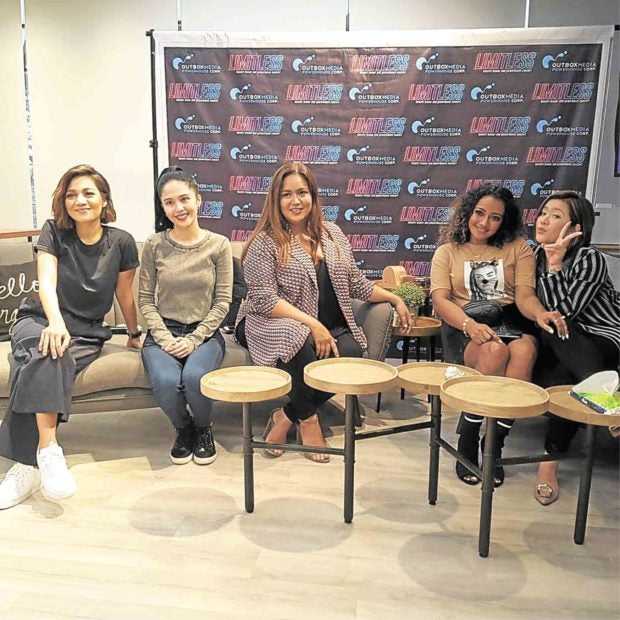 In the upcoming benefit concert “Limitless,” Angeline Quinto, Kyla, Radha Cuadrado, Liezel Garcia and Jayda Avanzado will celebrate female empowerment and pay tribute to women who have made an impact on society.

Mounted by Outbox Media, the show—to be held on Sept. 7 at Metrotent Convention Center—will pay tribute to the teachers of Antipolo City Special Education Center, which tends to over 250 children with varying medical conditions such as visual and hearing impairment, autism and intellectual disability.

In this forum, Radha, Kyla, Jayda, Angeline and Liezel talk about self-acceptance and the immense pressure on female singers to fit certain beauty standards.

Radha Cuadrado: During my early days with the hip-hop group Kulay, I was told that, in order to make it in the industry, I had to be beautiful. My bandmates and I were told to smile; we couldn’t frown, because we were supposed to attract people. It was frustrating that our draw wasn’t the fact that we were talented, but that we were beautiful or sexy.

But over the years, we have proven that we didn’t really have to rely on that. When fans approach us, they tell us that it’s our music they missed—not our looks. And hearing that makes me feel empowered.

Now, being a plus-sized woman, people would say that they don’t like me just because I’m fat; that I have to lose weight. But it’s heartening to know that there are others out there who appreciate me and my talent.

I want to inspire more women to be what they want to be.

Kyla: Now that I’m a mother, I have to make more sacrifices; there are opportunities I have to walk away from. Traveling is especially hard, because I don’t want to miss my child’s milestones. But I’m lucky to have loved ones who help me pursue both worlds as best I can—to be a singer and a mother.

As a mother, I nurture my child and give him love and security. I feel empowered that way.

Jayda Avanzado: As a public figure, I open myself up to bashing on social media. But instead of letting it affect me, I use it to make me stronger as a person; to make myself a better artist. I feel most empowered when I’m able to give my all, and still feel confident onstage even when some people try to pull me down.

Angeline Quinto: When I was still making the rounds of singing contests, I used to hear a lot of hurtful things about my looks. I was told that I was fat and had to lose weight. I got called talunan. But because I was determined to fulfill my dream of becoming a singer, I took everything in stride.

Things like that are painful and can easily make you lose hope. But you have to stand your ground; no one will help you but yourself. And maybe I needed to go through all those things.

I used to ask myself, “Kailan kaya darating ’yung araw na masasabi ko na champion ako?” It finally happened in 2011, when I won the ‘Star Power’ tilt. What I learned throughout the years is that, if you know what you want in life, if you’re brave and hold on to your dreams, you will eventually make it.

Liezel Garcia:  Even before I entered show biz, I always stood out because of my darker complexion and curly hair. As a result, I grew up shy. By the time I was in college, I realized that I have to start accepting myself. Little did I know that things would get harsher in show biz. People would wonder how I managed to become a singer with my looks.

I had been negative for so long, and I knew I had to change that. So, I used all of those—the bad experiences, the discrimination—to lift myself up.