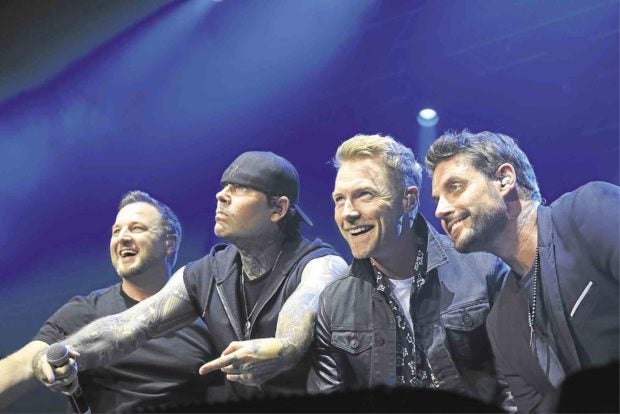 It has been 20 years since Boyzone’s first visit to the Philippines. But still, lead vocalist Ronan Keating said the kind of love the boy band receives from the local fans continues to be “amazing and electric” to this day.

So, in their recent—and what may very well be their last—show in the country, the four Irish lads, Ronan, Keith Duffy, Michael “Mikey” Graham and Shane Lynch, made sure to celebrate the “very special relationship” they have with the Filipinos by giving them a night filled with music and nostalgia.

“The 1990s was a really special time for pop music… We have spent a lot of time here. We feel like [we’re your] original boy band,” Ronan told the audience at the SM Mall of Asia Arena—one of the stops of Boyzone’s 25th anniversary/farewell tour, “Thank You & Good Night.”

The past 25 years have been “a hell of a ride,” the 41-year-old recording artist added, “and the loyalty we found here in the Philippines has been incredible.”

Boyzone, one of the most successful and best-selling boy groups in the international music scene, opened the show with the upbeat anthem “Picture of You.”

What followed was one joyous singalong after another, as the four dished out a greatest hits setlist composed of original hits and covers, including “I Love the Way You Love Me,” “You Needed Me,” “Love Me for a Reason,” “A Different Beat,” “Isn’t It a Wonder” and “Words.”

All these, of course, were delivered in signature ’90s boy band fashion: Quirky, adorable choreography and cheesy poses; they sang in line or in a huddle; simultaneously, they leaned their mic stands forward in the chorus of “All That I Need,” and even did little boxing moves in “When the Going Gets Tough.” 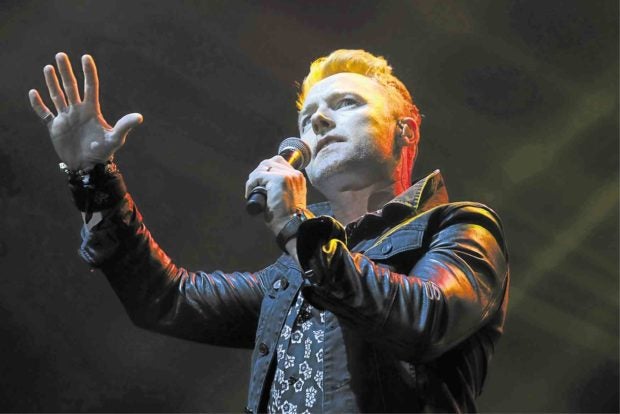 The show’s front act, Christian Bautista, also joined the band onstage and had everyone on their feet with a rousing performance of “No Matter What.”

Meanwhile, in a more somber and affecting segment of the show—mounted by Ovation Productions—the boys paid tribute to former band member Stephen Gately, who passed away in 2009 due to pulmonary edema.

To remember Stephen’s “talent” and “flair,” they performed “Every Day I Love You” and “Gave It All Away,” one of the last songs he sang. All the while, old photos and videos of Stephen flashed onscreen. And when his singing parts came on, the remaining members bowed their heads to pay their respects.

Curiously, Keith related that a butterfly flew across the stage while performing “Baby Can I Hold You”—a sign.

“Stephen had always loved butterflies. During a rehearsal session for our first tour without him, we were all feeling sad, because we weren’t used to working without him. But then a butterfly flew into the room. And we knew—and felt—he was with us,” he said.

“While we were back there singing, a butterfly flew by. It was an emotional and amazing moment,” he added. “We know that Stephen Gately is in the house tonight!”

But while the concert was mostly a trip down memory lane, it also offered a glimpse of what the band still has to offer, before the boys part ways for good. Aside from the well-loved tunes, they also performed “Because,” a song written by Ed Sheeran for Boyzone’s upcoming seventh and final studio album, which is also titled “Thank You & Good Night.”

“The album focuses more on our individual tastes— what we like, what we listen to—as opposed to just the ’90s stuff,” said Shane. “This is brand new stuff, a brand new sound, a brand new time for Boyzone.”

Read Next
Local newscast as impetus for dialogue
EDITORS' PICK
Get exciting deals and discounts when you download the new McDonald’s App
China expands lockdown against virus, fast-tracks hospital
SM continues to send relief assistance to remote towns in Batangas
FlipTop rapper Loonie freed on bail
‘A greener, cleaner tomorrow’: A how-to guide for Filipinos who want to help with today’s energy crisis
Countries with confirmed cases of coronavirus
MOST READ
Taal’s sulfur dioxide emission increases
No time for revelry; Tagaytay instead plans for alert level 5
FlipTop rapper Loonie freed on bail
Palace: US Senate move also made Duterte junk VFA
Don't miss out on the latest news and information.