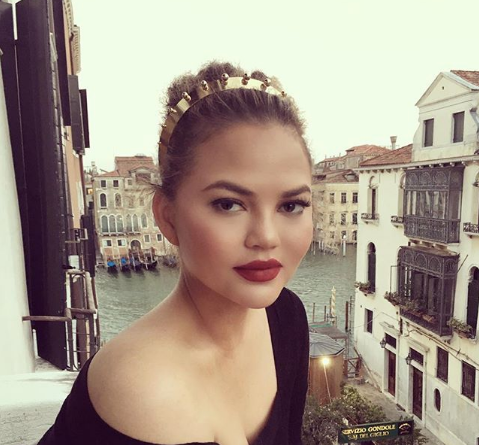 Chrissy Teigen may be witty and sassy on social media, but she also has a soft side.

The model shared on her Instagram page Monday, Aug. 27, her experience of watching with her family the much-raved-about movie adaptation of the novel “Crazy Rich Asians”. She posted photos of her and daughter Luna Simone gazing at a dress, as well as husband John Legend dancing with their little girl as the credits rolled.

“I’ve been excited to see this since production was announced but I could have never imagined how wonderful it would be,” Teigen said in praise of the film.

“Someone beautiful and aspirational,” she added. “It was something that simple that made my heart just…warm.”

“It made me happy to see this over the top story done from so many angles, some I could totally understand because of my own confusing Asian-American upbringing,” the model, who is of Thai descent, said. She added that she loved the whole movie, “from the quieter moments of talking around the table of sacrifice and past hardships to the spectacle of the bachelor party.”

But Teigen did not fail to state what may be the most important element for other viewers as well: representation.

“You never know how much you miss being represented on screen until you actually see what it’s like to be represented,” Teigen declared.

“Crazy Rich Asians” is widely considered to be historical in its achievements. It is the first Hollywood movie in 25 years to have an all-Asian cast since 1993’s “The Joy Luck Club”. It has also turned out to be a blockbuster, as the movie has raked up $76.8 million in the North American box office, as of this writing. JB