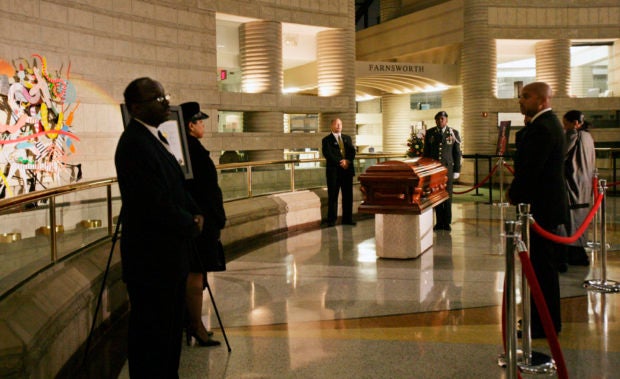 In this Oct. 31, 2005 file photo, Rosa Parks coffin lies in the Charles H. Wright Museum of African American History in Detroit. Aretha Franklin will lie at the museum for two days before her funeral will be held at Greater Grace Temple in Detroit. Franklin died Aug. 16, 2018 of pancreatic cancer at the age of 76. AP

DETROIT  — Hundreds of people are lining up to pay their final respects to Aretha Franklin.

Fans outside Detroit’s Charles H. Wright Museum of African American History have been talking about their memories of the Queen of Soul as they wait before dawn Tuesday for the start of public viewing. Occasionally the crowd bursts into song.

Many of those in line are from Detroit, but others traveled from as far as Las Vegas and Miami.

Paula Marie Seniors says the setting for the public viewings Tuesday and Wednesday couldn’t be more fitting. The associate professor of Africana studies at Virginia Tech says Franklin is “being honored almost like a queen at one of the most important black museums in the United States.”