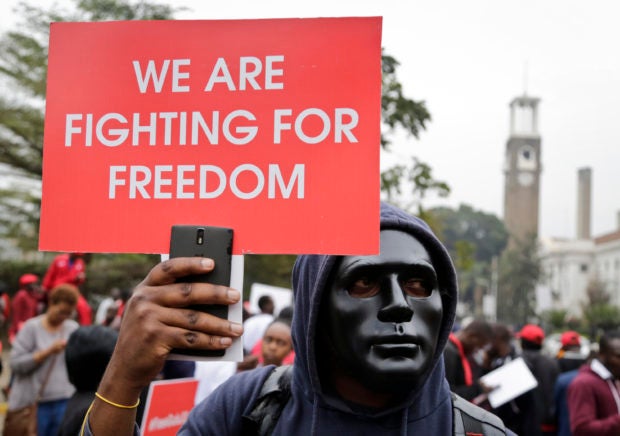 KAMPALA, Uganda (AP) — The Ugandan government filed a charge of treason Thursday against a pop star-turned-lawmaker who has emerged as a major critic of the long-serving president and whose jailing drew outrage from top musicians around the world.

Kyagulanyi Ssentamu, popularly known as Bobi Wine, was visibly weak and struggled to walk into court from what his lawyer said was a severe beating while in custody. The government denied it.

It was the first time Ssentamu had been seen in public since his detention, and he clenched his fists as he greeted supporters. A colleague wrapped a scarf in the colors of Uganda’s national flag around his shoulders.

The 36-year-old Ssentamu was arrested with other lawmakers while campaigning for a candidate Aug. 13. He was charged with illegal possession of firearms for his alleged role in an incident in which the motorcade of President Yoweri Museveni was pelted with stones.

The arrest sparked protests in the capital, Kampala, and elsewhere demanding his release, with scores of people detained as security forces cracked down on demonstrators. Dozens of top musicians, including Angelique Kidjo, Chris Martin, Chrissie Hynde and Brian Eno, signed a letter demanding Ssentamu’s release, and a social media campaign to #FreeBobiWine was launched.

In Kampala’s Kisekka Market area on Thursday, protesters held posters of Ssentamu, praising him as the “People’s Voice”. Demonstrations also occurred in Nairobi, the capital of neighboring Kenya, and in London.

A military court in the northern town of Gulu dropped the weapons charges, but he was quickly re-arrested, taken to a magistrate’s court and charged with treason, which carries the death penalty.

He needed help to walk into court and appeared to cry at one point. He sat in the dock in magistrate’s court, with his lawyers saying he was unable to stand on his own.

Ssentamu was arrested with four other opposition lawmakers, three of whom also face treason charges. A fifth legislator has been hospitalized with injuries allegedly sustained during detention.

The magistrate ruled Ssentamu should be allowed to see his own doctors, and he was remanded into custody until Aug. 30.

Medical treatment abroad is desirable, but first he needs to go to a private Ugandan health facility, said one of Ssentamu’s attorneys, Medard Sseggona.

“As to whether they can do it is a different matter,” he said.

Other opposition figures expressed concern about being targeted by security forces as Museveni’s government has come under pressure in the Ssentamu case.

“Every way out of my home is barricaded since very early today,” tweeted Kizza Besigye, a four-time presidential challenger who has been jailed many times.

Police spokesman Emilian Kayima later said Besigye was arrested when he tried to force his way out. The spokesman said forces also were deployed at the homes of certain Ugandans after receiving intelligence that some “wanted to engage in criminal activities.”

Ssentamu, who was elected to parliament last year, has emerged as an influential critic of Museveni, especially among many educated youth who cannot find work in Uganda, where hospitals often lack basic medicines, and main roads are dangerously potholed.

In his music video “Freedom”, he sings from behind bars: “We are fed up with those who oppress our lives.”

He has protested an unpopular social media tax as well as a change to the constitution that removed the presidential age limit of 75. That provision allows the 74-year-old Museveni, who has been in power since 1986, to seek re-election in 2021.

While the president was departing, authorities said, his motorcade was pelted with stones by people associated with Ssentamu and the candidate he backed, Kassiano Wadri.

Ssentamu’s driver was shot and killed, allegedly by security forces.

In a statement late Wednesday, Museveni accused “unprincipled politicians” of luring youth into rioting. Addressing calls on social media to free Ssentamu, he said he had no power to do so.

“Let us therefore wait for the courts and see what they decide,” Museveni said.

Museveni, a U.S. ally on regional security, has been elected five times. Although he has campaigned on a record of establishing peace and stability, some worry that those gains are being eroded the longer he stays in power. CC

In Uganda, ‘Rolex’ means time — for an eggy snack