Return of the 1970s heartthrobs 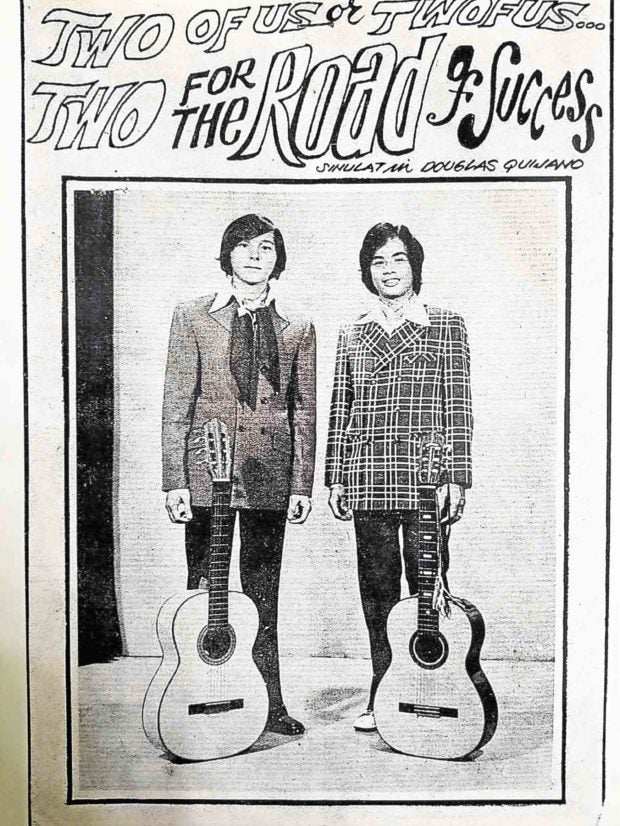 In those halcyon days before martial law, Jojit Paredes was a certified dreamboat who, along with his childhood pal Ronnie Henares, toured various campuses as the guitar-strumming duo Twofus.

“We were invited to different exclusive girls’ schools,” Jojit told the Inquirer. “But I don’t remember singing in a boys’ school—except at De La Salle, where Ronnie was the president of the student council!”

Jojit, the eldest of five siblings, has known Ronnie since age 5, because they were neighbors in Pasay City.

Since Jojit had to contend with four sisters back home, Ronnie became his adopted brother. They were so close that Jojit’s father, lawyer Jesus Paredes, used to joke: “My only son has turned into a Henares!”

As teeners, Jojit formed a band with Ronnie and his cousins—including Jim Paredes, who later joined Apo Hiking Society. “We competed in a Battle of the Bands in La Salle and placed second,” Jojit recounted.

“It was a lot of fun singing with Jojit,” Ronnie remarked. “We loved the same type of music, and our voices blended well together. He was the guitar man and patiently taught me how to play the instrument.”

The other band members soon dropped out, but Jojit and Ronnie stuck it out—belting out tunes for family and friends. It was in one such gathering, while jamming in front of a campfire at Matabungkay Beach in Batangas, that they were “discovered,” leading to a recording contract with Villar Records.

They waxed singles, covers of popular American songs like “Snowqueen of Texas,” “Where You Lead” and “Wake Up Little Susie.” “We usually did songs by The Everly Brothers.”

As for the duo’s name? Jojit remembered Robert F. Kennedy’s boat, “which was christened 11 of Us, because he had 11 children. So we called ourselves Twofus.”

After a show in St. Scholastica’s, Jojit’s sisters Carol and Gerty introduced him to Isang del Rosario, whose brother-in-law, Art Vergel de Dios, hosted a noontime show, “The Musical Extravaganza,” on ABS-CBN.

The two scored their first TV appearance, which led to more opportunities, culminating in a regular gig on “D’Sensations,” which aired on ABS-CBN from 1970 to 1972. “Ike Lozada introduced us to the show’s director Tony Santos Sr. and he asked us to be part of the show. Our jaws dropped!”

Coincidentally, Jojit’s childhood crush Vilma Santos was in the cast of “D’Sensations.”
“Vilma’s mom used to come to our house to buy RTW clothes from my mother.” Once, little Vilma tagged along. “That was before she became a child star in ‘Trudis Liit.’ I always found her pretty.”

In a twist of fate, Jojit’s first movie was with Vilma’s screen rival, Nora Aunor, “Super Gee” in 1973. “It was a pleasure working with Nora, who was also the movie’s producer. I was so flattered to be paired with the Superstar,” he reminisced. “As a newcomer, I was nervous. But she guided me during the shoot.”

“Jojit used to call me Peanut,” the Superstar looked back. “He was a good singer and actor. Crush ko siya noong araw!”

Jojit eventually got to share the silver screen with Vilma in “Tok Tok Palatok” in 1974. (He also acted opposite Gina Alajar in “Cofradia” in 1973.) 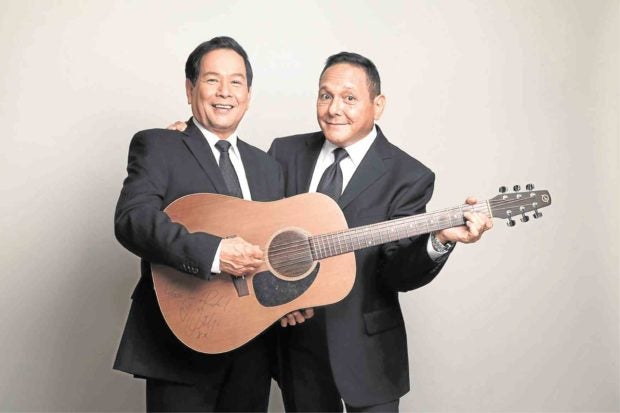 He was so smitten with Vilma that he once motored all the way to Nagcarlan, Laguna, where she was filming. “I was with my fans, Narrie, Luz, Dolor and Nita. In my Dodge Colt, I drove for three hours because I wanted to see Vilma.”

“Jojit is a longtime friend,” Vilma shared with the Inquirer. “We haven’t seen each other for decades, but we remain friends. It was fun working with him. He’s a gentleman … smart, amiable, charming! Those were the days!”

By that time, Twofus had already disbanded—with Ronnie exploring a different world, dancing on the show “Penthouse 7.”

Jojit, for his part, signed up as a recording artist with Vicor, where he was groomed as the next Victor Wood. “I released one album, titled ‘Welcome to the Music.’ My biggest hit was a cover of Daniel Boone’s ‘Beautiful Sunday.’”

After graduating from La Salle (with a degree in History and Political Science), Jojit branched out into TV production.

His first venture as producer was a Sunday noontime variety show, “Germside,” hosted by German Moreno, in 1978.

“He was then known as Nora’s sidekick and cohost on ‘Superstar.’ I studied the ratings of radio shows and Germs’ program was a consistent toprater. I thought it was about time for him to have his own TV show.”

People were skeptical, but Jojit was insistent. “Germs was so well-loved that I knew we would immediately get the support of the entire industry.”

Jojit’s idea clicked. “It was such a hit that another producer, Gil Balaguer of Geebees, bought it and renamed it ‘Germspesyal’ after two years,” he related. Then, the network decided to produce it, and it became “GMA Supershow” in 1984 and ran until 1997.

Germs’ show was the Sunday habit to beat for years and served as the training ground of such luminaries as Jackie Lou Blanco, Lani Mercado and Megastar Sharon Cuneta.

“Sharon’s parents were my former mother-in-law’s neighbors in Dasmariñas Village. I remember the young Sharon as shy. But she didn’t lack self-confidence, either,” he said.

In 1985, Jojit, armed with a law degree, moved to the United States, where he worked as a paralegal until his retirement a year ago. He would still perform for the Filipino community every now and then.

In 2007, he reunited with Ronnie for a show at Celebrity Center in Hollywood. “It was so successful that I challenged Ronnie for a repeat in Manila.”

“I’ve always enjoyed singing with Ronnie,” Jojit said. “I grew up with four sisters, but never felt the need to have a brother because I had Ronnie next door.”

The Henares kid has turned into a Paredes, too.