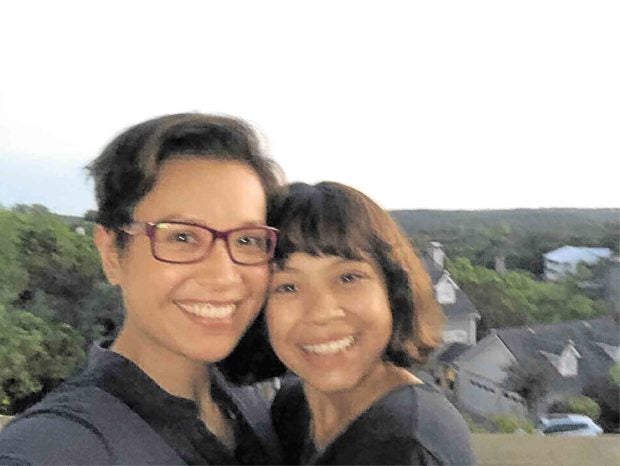 The author (left) with Eva Noblezada on the set of “Yellow Rose” in Austin, Texas

And, just like that, I am back in Manila following a whirlwind trip that included stops in Los Angeles, New York, Austin and Seattle. Each city was visited for a different purpose, but all in all, the ride was fun.

The Hollywood Bowl’s production of “Annie,” this year’s summer musical, was a blast! Despite the stresses associated with putting up a full-on production in less than two weeks (huge sets, numerous wigs and costumes, daily eight-hour-a-day rehearsals with fittings and press squeezed in), everything came together just in time for opening night.

Sure, there would be slipups here and there, but the entire company was in it together.

Ana Gasteyer and I would do speed runs of lines before each show just before the overture began. David Alan Grier sat in quiet contemplation on a stool on stage right with his dresser nearby. Various vocal and physical warm-ups were taking place everywhere, while the makeup and hair teams were busy making sure our looks were complete. Dressers were getting us all in costume. There was definitely a lot going on, but that’s customary.

One big thrill was having “Annie’s” composer Charles Strouse and original director and lyricist Martin Charnin watch the show, and then hosting them backstage!

After Sunday’s final performance (yes, this was probably my shortest run of a musical ever), the cast let its hair down with a party at The Lot. Afterward, a few of us (plus some friends and family) headed to Tramp Stamp Granny’s, a brand-new piano bar owned by Darren Criss and his fiancée Mia Swier, to sing show tunes and Disney staples until closing time. It’s amazing what happens after a few cocktails!

My main intention for visiting New York was to sleep, since I had gotten so little of this precious commodity in Los Angeles. For some strange reason, some of the best nights of slumber were achieved in my Manhattan apartment, so I knew I’d get some rest. And I was right.

Although I had dedicated my time to seeing shows, I also made sure to hit a few of my favorite restaurants—Ippudo and Gyu-Kaku, to name a couple—to get my preshow food fixes and postshow cocktails with friends. My stay was way too brief, but any time I get to spend in this magical city is good for my soul.

Perhaps this is as good a time as any to tell you what I’ve been up to! I headed to Austin, Texas, to do an indie movie!

Titled “Yellow Rose,” written and directed by Diane Paragas, the film tells the story of an undocumented Filipino teenager named Rose (played by “Miss Saigon” star Eva Noblezada), who dreams of becoming a country music singer, but has her life thrown in a maelstrom when her mother Priscilla (played by Princess Punzalan) faces deportation back to the Philippines. I play Gail, Priscilla’s sister and Rose’s aunt.

Shooting is still underway in Austin, and the film is scheduled for release later this year.

Finally, Rob, Nic and I met up in Seattle to witness Rob’s cousin Kimi Liekweg get married to John Bullard Jr. It’s always a fantastic time whenever family gets together for a happy occasion.

To Kimi and John, our heartfelt congratulations! We wish you nothing but happiness and blessings in your life together.

Allow me this space to greet my mother Ligaya a very happy birthday! She turned 81 on
Aug. 14, as feisty as ever. May her glow never dim with the years that pass!

Finally, on Aug. 12, my sometime leading man and full-time friend Aga Muhlach celebrated birthday No. 49! I wish you nothing but the desires of your heart and more celebrated films!