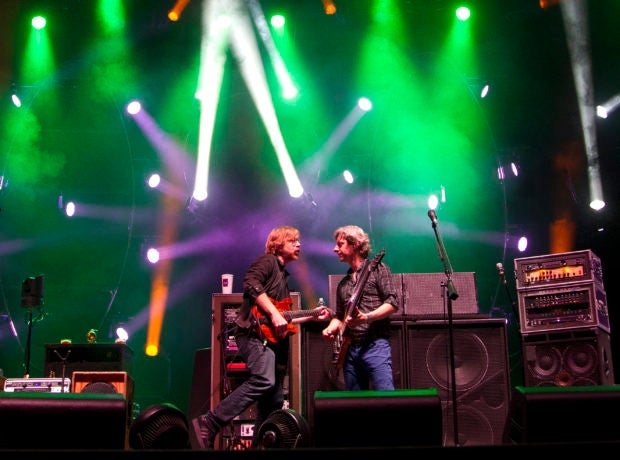 In this June 10, 2012 file photo, Phish performs during the Bonnaroo Music and Arts Festival in Manchester, Tenn. A three-day Phish festival was washed out by dirty water from torrential rains in central New York just as the band was about to go onstage for its traditional sound check jam Thursday afternoon, Aug. 16, 2018. The Curveball festival was expected to draw more than 30,000 fans to the Finger Lakes village of Watkins Glen starting on Friday. Image: AP/Dave Martin

WATKINS GLEN, N.Y. (AP) — A three-day Phish music festival was scuttled by dirty water from torrential rains on Thursday, with health officials denying a permit just as the rock band was about to go onstage for its traditional sound check jam.

“We are still in shock,” the band said in a statement on its website . “Our families are here, our gear is set, our tents are up. We keep waiting for someone to come over and tell us that there is a solution, and that the festival can go on. Unfortunately, it is not possible.”

The Curveball festival was expected to draw more than 30,000 fans to the Finger Lakes village of Watkins Glen, in central New York, starting on Friday.

A mandatory order to boil water was issued for the area on Thursday after days of heavy rain, and the state Department of Health said tests showed it would be impossible to deliver clean drinking water to festival patrons and vendors.

“While all parties acknowledge the inconvenience of this cancellation to patrons,” the health department said, “we have a responsibility to act in the best interest of public health and safety for all.”

A 14-county state of emergency was in effect on Thursday, two days after storms poured more than 6 inches (15 centimeters) of rain on towns between Seneca and Cayuga lakes, washing out roads and swamping cars and mobile homes. More storms were anticipated.

Phish fan Jeff Goldenberg had traveled from Toronto with his wife and baby for the event and said the cancellation was “a total bummer.”

“Cancellations happen. But what makes Phish different is that people plan their life around it. They put a lot of time and money and effort into following them everywhere,” Goldenberg said. “People are really upset.”

Many Phish faithful had already set up tents on the grounds of Watkins Glen International, an automobile racing track with camping facilities. Phish and Curveball organizers said they will notify ticket holders about how to obtain refunds.

Phish, known for extended jams, improvisation and a wide variety of genres from psychedelic rock to bluegrass, has a dedicated base of followers much like the Deadheads who followed the Grateful Dead from the mid-1960s through the early ’90s. CC