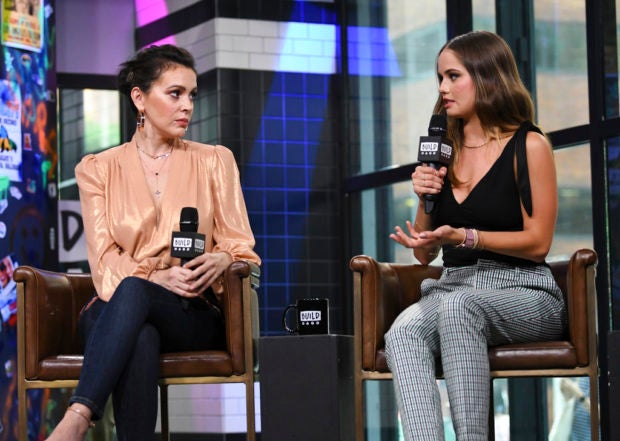 NEW YORK — After the trailer was released for the new Netflix series “Insatiable,” some on social media voiced concern: Was the dark comedy fat shaming?

The show, which drops Friday, follows the return to high school of a girl named Patty, who loses a lot of weight after years of bullying. Having lost the weight, she’s out for revenge.

Debby Ryan and co-star Alyssa Milano agreed that while the subject matter was difficult, “Insatiable” serves a purpose in stirring conversation. Twitter’s response is evidence of that.

“It was hurtful that people thought that we were doing it just as a joke,” Ryan, 24, told The Associated Press in a recent interview. “And confirmed how important it was for us to …”

“Do it,” Milano said, finishing the thought. Ultimately, Milano said, the series is a classic tale of growing up.

“I think it is a coming-of-age story not only for Debby’s character Patty, but all of the characters in the show,” said Milano, who plays a driven, conniving housewife with a heart. “And I think it is a satirical look at what happens at the point in life when you have accepted your own truth and your truth has empowered you to then move past it and what you have to do to move past it.”

As for the social media controversy, Milano, 45, said she’s “of the school that it is much better to talk about these things and at its best, entertainment should be a conversation starter.” As the show progresses, the Twitterverse “will have more to probably shame us about and be upset about.”

Ryan, a former child star on the Disney Channel series “Jessie,” said fat shaming is “one of the last unspoken prejudices that people just blatantly do all of the time and almost don’t get slapped on the wrist for it.”

Her character is taunted as “Fatty” Patty, leading to a confrontation that forces her to have her jaw wired shut. Consequently, she loses weight. Ryan wore prosthetics for the role and learned something about the experience firsthand.

“As a woman, when people, kids who are playing the bullies, or crew members would see me walking around in prosthetics they would laugh and be like ‘that’s crazy,'” she said.