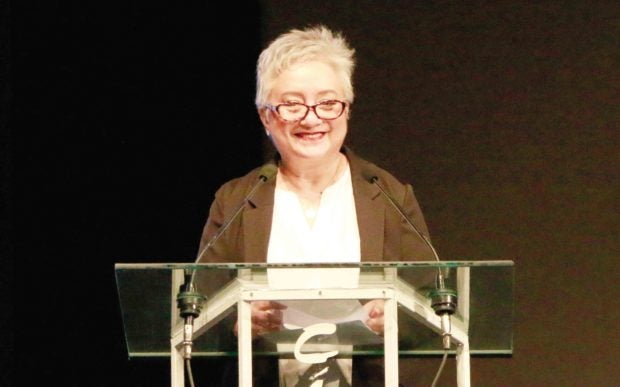 “We encourage feedback that [the participating filmmakers] can learn from,” she said in her welcome speech at the opening night of the 14th edition of the Cinemalaya Philippine Independent Film Festival last Friday.

“It is safe to say that as Cinemalaya films have grown in number and achievement, so have the audience become more conversant with the language and value of film,” Guillen pointed out.

She said more feedback would be appreciated, especially “those that show an openness to accept that there is a voice in every work that needs to be heard, whether we agree with [a filmmaker’s] story or not.”

“Diversity is a by-product of freedom. And if filmmakers and the audience face its challenges in our festival, it is a great opportunity for growth,” Guillen declared.

In last year’s edition, the audience took to social media to express their reaction to the works of the participants. Some comments were reportedly too harsh for the filmmakers, some of whom pleaded for the audience to be more open-minded and appreciative of local works.

Guillen also noted that Cinemalaya is unlike the mainstream industry, “where the demands of commerce have prominence … It is the vision and the hope of Cinemalaya that the filmmaker’s unique voice survives the pressures to conform. This is where the filmmakers and the audience of Cinemalaya can help each other.”

To a screaming crowd, the lead actress introduced the members of the film’s cast and crew, and then said: “Two years and two hours po (was how long it took to make the movie), with a lot of love and passion, literal na dugo, pawis at hirap.”