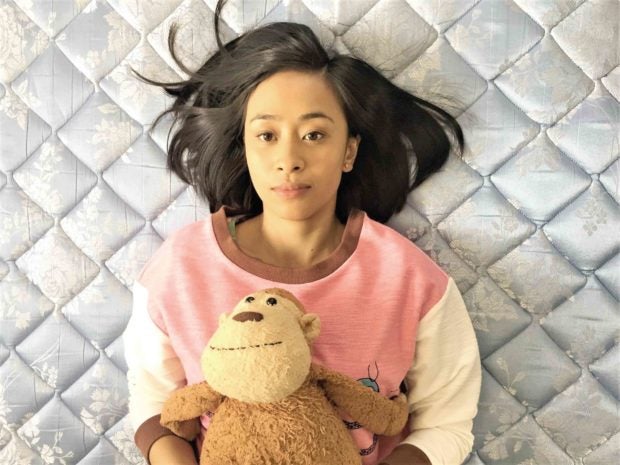 (Second of a series)

LOS ANGELES—How Charlene deGuzman’s well-received indie film on sex and love addiction got made is like a Hollywood movie in itself. It all began in 2013 when actor-producer-writer Mark Duplass started following Charlene on Twitter, where she has attracted over 46,000 followers because of her funny tweets. Via DM (Twitter’s direct message feature), she wrote to Mark, “Oh my God, thank you for following me. You’re a hero of mine!”

Mark, an indie film stalwart who admired Charlene’s humorous Twitter musings, replied, “If you ever have anything that you’ve written that you’d want to show me, send it over.” The San Jose, California native did not have any script, but a year later, she wrote him, “Hey, I have this pilot.”

Charlene penned the TV pilot script based on her experience with sex and love addiction, for which she enrolled in a 12-step program. To her surprise, Mark, who’s the brother of Jay, also a multihyphenate talent, suggested that they develop her pilot into a feature film, instead. The result is “Unlovable.” While it’s fictional, the film’s story centering on Joy is based on Charlene’s sex and love addiction and recovery.

Mark wanted to star opposite Charlene, but because of a scheduling conflict, he decided to go behind the camera as a coproducer, along with Jay and comedian Patton Oswalt, among others. Director Suzi Yoonessi and writer Sarah Adina Smith came on board.

Charlene launched a Kickstarter campaign to raise funds for her film project. It helped that the Fil-Am has a huge fan base on Twitter and that her short films on her YouTube channel are popular, especially “I Forgot My Phone,” a poignant statement on alienation in the Internet age and our preoccupation with our smartphones, which has been seen more than 51 million times. Rolling Stone named Charlene one of the “25 Funniest People on Twitter Right Now.”

It’s a happy, surprising twist for Charlene, who began as a competitive dancer in her childhood, then set her sights on becoming a magazine journalist in New York. But the call of dance led to off-Broadway shows and the national tour of the percussion group, Stomp.

NBC News quoted Charlene as saying in an interview: “It means so much to me that I get to be myself—a Filipino woman starring as a Filipino woman. Growing up, I so badly wanted to see a Filipina on TV and in the movies, and I didn’t have that. Maybe now, other young women will see this (‘Unlovable’) and not be afraid to tell their stories.”

How surprised were you with the critical acclaim of your performance in “Unlovable”? I was very happy. But more than the good reviews, what makes me happiest are the e-mails and messages I’m getting from people who connected with it.

“Unlovable” was inspired by your own experiences while going through a 12-step love and sex addiction program. Sex addiction is generally a taboo topic, especially among Filipinos. What was your experience like, writing and opening up about this addiction? It’s my intention to bring awareness to sex and love addiction. My addiction revolved around pursuing unavailable men, and not being able to leave them. Jumping from one relationship to the next, always looking for “The One.” Using sex as validation because I wanted love so bad, and it’s all I thought I was good for.

Addiction comes from pain, trauma and shame. The only way to heal shame is to talk about it. No matter how uncomfortable it makes people, I’m going to keep speaking my truth.

Why should we keep people from healing just because it’s “taboo”? I’m excited to be showing the world that there’s a better way.

How would you describe your journey as an actor so far? The perfect combination of miraculous and self-made. There have been many miracles—and I also worked my ass off. I made my own stuff, shared my authentic voice with the world, and never gave up. It’s been a long and challenging journey.

How do you prepare for an audition? Any good luck rituals? John Hawkes (my costar in “Unlovable”) taught me that if you put in the work to prepare, you can go into your audition knowing that you truly did your best, whatever ends up happening. I like spending a lot of time with the script. I’ve learned from experience that it’s more important for me to know the character than have the lines perfectly memorized.

I don’t believe in good luck, but I do believe in good energy. In the morning of the audition, I do everything I can to feel good—I meditate, go on a hike, and dance around in my apartment. In the car, I sing at the top of my lungs whatever music I think my character would listen to. In the waiting room, I set my intention: to play, have fun and show who I am.

What is the most frustrating part of trying to land roles in Hollywood? Not getting them! Working so hard, and being told “No” over and over again.

How do you handle rejection? It’s a lot easier for me now than it was before. I allow myself to feel the disappointment and loss for as long as I need. Nowadays, it can be as short as five minutes. It once took me three days to grieve over a loss. And I cry it out and let myself sulk.

Then, I thank the experience, let it go, and trust the unfolding of the journey. The amount of rejection and disappointment in this business is brutal.

Have there been times when you almost gave up? There was actually one time very recently. That was the first time I even thought about it—and it didn’t last very long, because when it came down to it, I didn’t know how to give up.

Do you, as an actor of color, feel that opportunities for minority actors are improving or getting worse? There’s definitely major progress! When I got to meet Josh Chan (Vincent Rodriguez III) and his entire Filipino family on “Crazy Ex-Girlfriend,” I was completely blown away. My eyes watered. Growing up, I never got to see a Filipino be a lead on TV, let alone play an actual Filipino.

Now, I’m watching actors like Manny Jacinto on “The Good Place,” and it’s exciting. And my favorite show right now is “Pose”—probably the most important television show to date, with the largest cast of trans people of color and LGBTQ. It’s major progress, and it’s beautiful.

What’s your stand on whitewashing—or the casting practice in which white actors are cast in nonwhite character roles—in Hollywood? I feel that we’ve reached the level of consciousness where whitewashing is completely unnecessary. Even if it has been done before, it does not mean it’s acceptable now. Whitewashing is a blatant act of white privilege, and now is a challenging, yet exciting time of bringing it to light and making a shift.