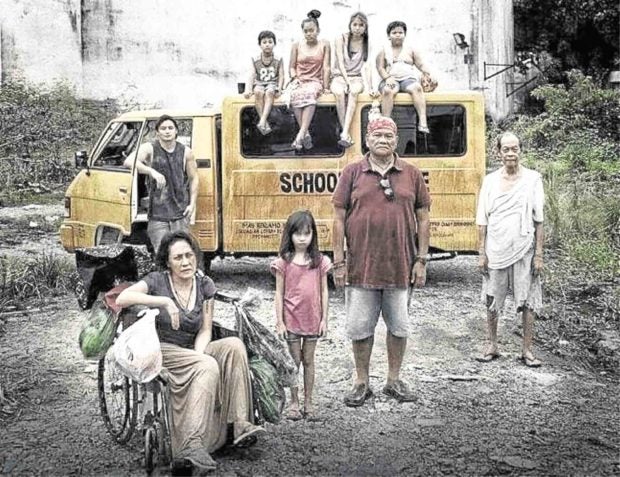 The hardest task for a director is to make child actors say curse words, steal and pretend to do drugs for the sake of art, according to Louie Ignacio, director of the gritty drama “School Service.”

“I made them do bad stuff here. They didn’t know all these things before taking on the project, but they had to learn them because they’re actors,” Ignacio said of child thespians Therese Malvar, Felixia Dizon, Kenken Nuyad, Ace Cafe, Santino Oquendo and Celine Juan, who plays the lead character Maya.

The film is an entry in the 2018 Cinemalaya Philippine Independent Film Festival, which will run from Aug. 2 to 13 at the Cultural Center of the Philippines in Pasay City.

Maya, 8, is walking home from school when a woman (Ai-Ai delas Alas) riding a school service stops her to ask for directions. In return for Maya’s help, the woman offers to drive her to her house. Maya agrees, but to her horror finds herself miles away from home.

For Therese, working on the film was like being part of a social experiment. “I sold sampaguita for real. I think people thought we were doing a documentary so they bought from me and paid me real money. I actually earned P50 from selling flowers,” she recalled.

Therese, who is the eldest in the group at 17, added: “I made sure to guide the kids, especially because they were also instructed to beg on the streets.”

She also said taking care of the bunch had been quite tricky. “They kept asking questions about the script, like the meaning of some of the cuss words that they were made to say,” she explained. “Direk Louie and I would always remind them that it’s just a movie, that what they’re doing is bad and should not be done in real life.”

Therese said the fact that the kids were all talented actors made things easy for her. “They’re natural at acting. They didn’t have that sing-song tone when they delivered their lines. They were able to swear convincingly, even though they were really shy doing it,” she observed.

“Her personality changed when the camera started grinding. She became angry and disrespectful. She was very intimidating,” Therese said of the veteran comedienne. “Off-cam, Ms Ai-Ai is very simple and sweet. She didn’t make us feel that she’s the one and only Comedy Queen.”

According to Ignacio, Ai-Ai as Rita represents all those who kidnap children and teach them to steal and beg in the streets for a living. “Ai was definitely not in her comfort zone while doing this project. She is extremely bad. She hurts the children. This is a first for her,” he added. The two first worked together in the award-winning drama “Area” in 2016.

Ignacio was inspired to write the story of “School Service” because he said he has been seeing similar kids on his way to work for years now. “I said I might as well show their story to let people know that they exist and that their condition is a problem that needs immediate solution.”

Interestingly, Ignacio said he employed magical realism into this story that’s based on true events. “It’s part of my treatment. I can’t reveal much about it. There are scenes here that depict what the kids imagined for themselves but never end up having,” he explained.

Therese let on that the “magical” scenes were what their characters see “as an effect of inhaling rugby. They sometimes experience moments that aren’t real. This also has something to do with how the characters are easily controlled by the syndicate,” she pointed out.