Buklod’s back – and on a mission

Their vocal harmony is not as tight as it used to be and their fingers are not as nimble moving across the fretboard of their guitars.

But their music has not lost its edge.

Driven to wrote new music in response to what they perceive to be the deterioration of the rule of law and the erosion of democracy in the country,  Noel Cabangon, Romeo Dongeto and Rene Boncocan are back together as Buklod, one of the most popular protest music groups in the 1980s and the early 1990s.

They parted ways years years ago for both personal reasons and growing political differences, with Cabangon continuing on the road to become a recording artist, Dongeto remaining firmly involved in the nongovernment sector, and Boncocan joining the advertising world, first as a graphic artist and then later as a junior art director.

And for more than 20 years, they pursued their individual paths. And while they have had countless offers for a reunion, it never felt right. Until now.

For the three, who are now in their 50s, they just felt the dire need to come up with songs that will reflect the dark realities that they are seeing around them.

“We need to speak out and say something. We were among those who stood up and fought for the restoration of democracy in the 1980s. We were young then and with so much idealism and passion. Now we have grown older and have our own families. We want our children to live in a peaceful, just and progressive country,” says Cabangon.

“We also realized that we needed to pick up our guitars again and do what we did together before, given the current state of our society and the dearth of politically and socially relevant songs,” he adds.

Dongeto shares that for more than two decades, the three of them did not have any serious discussion of a reunion.

Boncocan left the trio a year after they released their first album “Buhay at Bukid” in 1988, leaving Dongeto and Cabangon to carry on, bringing to the market the now iconic “Tatsulok” and “Kanlungan,” before finally calling it quits in 1994.

The last time they performed together as a trio was in 1996 during the “formal” farewell gig of Buklod in Quezon City.

But fate had other ideas, and when they jammed in 2017 at the Conspiracy Cafe in Quezon City as part of the tribute to the music of Dongeto, followed up by another jamming session in Baguio City, they sat down and seriously planned for the reunion album.

The timing was right as this year marks the 30th year since the release of their first album and the present situation of the Philippines has compelled the three – who have never really cut themselves from their roots as activitists – to speak up and literally make their voices heard.

“We discussed and agreed that so many things are happening in our country today and we believe that state of affairs is retrogressing – the war on drugs, mismanagement and corruption, inflation, misogyny, and the continuing attacks on institutions and personalities who don’t necessarily agree with some of the pronouncements and actions of the president and his allies in the legislative and judiciary. We felt that after three decades, our songs then are still very relevant today. And we believe that we can still contribute in raising public awareness on these issues and by providing our own perspectives on the same through music,” says Dongeto.

And they also just missed playing together as Buklod.

Getting reacquainted with the production process

“We were really good friends, and after the first meeting, it was like we never broke up as a group,” says Boncocan.

But actually going into the studio and get back into singing and recording the album – with each of them agreeing to contribute three original compositions each – proved more difficult than they anticipated, with Boncocan and Dongeto admitting that they had to relearn what they had forgotten after being away from the music scene for so long.

“It was hard at first because I was no longer familiar with the production process and the atmosphere in the studio,” says Boncocan.

“Oh, yes, it was difficult and very challenging. The last time I seriously went into recording was in 1993. The heart was willing, but the body and the voice is a different issue,” adds Dongeto in jest.

Thus it fell upon Cabangon, who migrated from the underground to the mainstream in 2009 when he was given a recording contract by Universal Records, to guide his bandmates through the production process, guiding them from pitch to pronunciation, phrasing and putting the right emotion into every part of the songs.

But what they did together was critique the lyrics and the melody, a process that they got used to in their early years.

“Critiquing our songs was also easy because we have been used to such a process. Even during the recordings there are songs that were still being edited in terms of lyrics and syntax,” says Cabangon.

The result is a 10-song album called “3 Dekada: Ang Muling Pag-awit,” with three originals from each of the members plus a refreshed version of “Tatsulok,” the carrier single of the second album released in 1991 and likewise a commentary on society that is as relevant then as it is today. 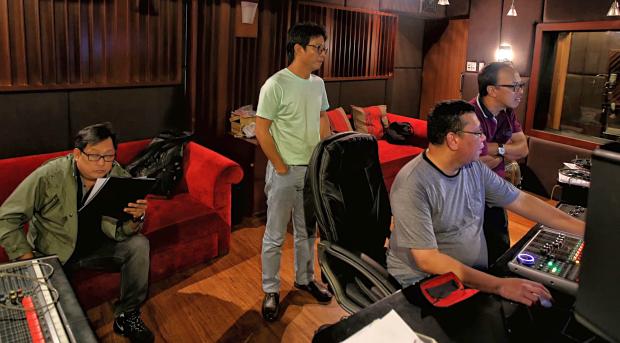 Cabangon (standing, right) had to guide his band mates through the production process in the studio. (Photo courtesy of Buklod)

Going on the road?

There are no concrete plans of taking Buklod on the road other than the release of the self-produced and friend-financed album “3 Dekada” later this year.

“We are still asking ourselves how far are we willing to go for this album when it comes out. I guess it will depend on the people who will listen to these songs and if they will find our songs relevant. We will wait for the audience reaction. We know that it’s all a matter of perspective. And some might disagree with our positions,” says Dongeto.

But they are not closing the doors on the possibility either, especially now that their music is needed and they have rekindled their mission to fight for their principles through song.

“Our commitment is to be the narrators of Filipino stories, to be the voice of the voiceless, and be part of the struggles of Filipinos,” says Cabangon. /atm 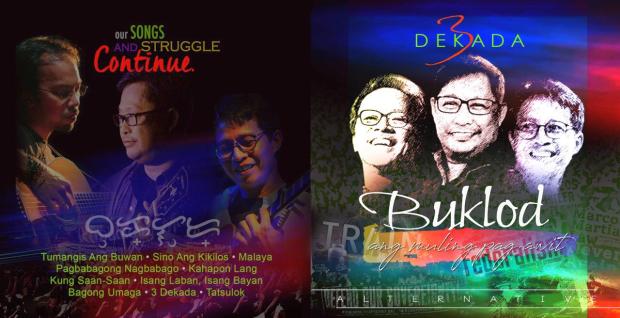 The album “3 Dekada: Ang Muling Pag-awit” consists of 10 songs with three originals from each of the members plus a refreshed version of “Tatsulok.” (Photo courtesy of Buklod)

Read Next
Carla Abellana, Tom Rodriguez meet ‘Mulan’, ‘Lion King’ animator Mark Henn
EDITORS' PICK
Tips for a cheerful life
Duterte: When I said I will fight drugs in 6 months, I thought it was like in Davao
Hidilyn Diaz wins weightlifting gold in Tokyo Olympics
Harnessing technology for quality education
Connect to PH’s fastest network with new Signature Plan Lite at only P599 per month
Duterte warns of possible lockdown if ‘more aggressive’ Delta variant spreads
MOST READ
Hidilyn Diaz wins weightlifting gold in Tokyo Olympics
Go to war with China over West PH Sea? It will be a ‘massacre’, says Duterte
Hidilyn shoots not only for gold but also for permanent place in PH sports history
Duterte acclaims Sotto: ‘He can become a good vice president’
Follow @tinaarceodumlao on Twitter
Don't miss out on the latest news and information.