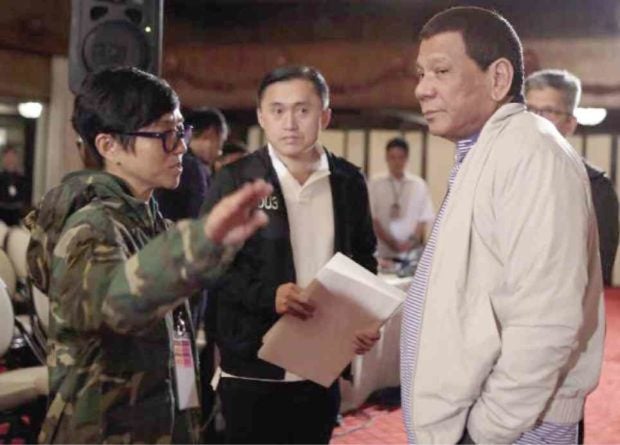 “I’m not sure if I could call this a directorial job,” said film and television director Joyce Bernal of the work she has done for President Duterte’s third State of the Nation Address (Sona) on Monday.

“I am not actually directing him. He is the President and not an actor,” Bernal explained. “I couldn’t rehearse with him. Unlike actors, I couldn’t just slap him to bring out the emotion I wanted him to feel for a particular scene.”

Bernal said it was Presidential Communications Operations Office Secretary Martin Andanar who called her about the assignment. Last week, she visited the House of Representatives, where the Sona was held on Monday.

On Saturday, two days before the Sona, Bernal explained to the Inquirer that her work would begin “the moment the President alighted from his chopper. [The camera] would then follow him going into the venue and stay with him while waiting for his turn to speak. My work would end after his speech. I would have nothing to do with what would happen on the side.”

Bernal said that since the President was known to be very spontaneous, her goal was “to capture that … Kung may mga matitira at masasaktan, we want to capture that, too.”

She added that it would have helped if she were given more time to meet with the President prior to the event. “I want to know him, to feel him—I think that’s important. It’s different if you get to talk to him and know what he wants, if we get to know each other’s intentions and eventually combine them,” she pointed out. “If not, I could still work on whatever information I’d be given. I’m OK with that.”

Bernal added that during the meeting with Andanar’s team, “we talked about what we can and can’t do. The list of ‘don’ts’ are longer because we have to follow protocol.”

Bernal replaced Brillante Ma Mendoza as the Sona’s director. She said she got to watch Mendoza’s work and would incorporate some aspects of it to this year’s Sona. “This is partly because we would not be able to replace the cameras mounted at the venue anymore. Congress doesn’t want obstruction,” she explained.

The director, however, said she requested for more cameras. “You saw different shots. I wanted to make sure that the audience’s interest was sustained,” she stressed. “I had wanted to include subtitles for those who were busy doing their chores and couldn’t hear the TV well. They could just read what he was saying, but the President is known to ad lib so that would be hard to pull off.”

Bernal earlier said she would direct the Sona free of charge. “I’m an iskolar ng bayan kaya para ito sa bayan,” said the director, who took up Film at the University of the Philippines in Diliman, Quezon City. “Doing this for free is really not a big deal.”

Read Next
John Legend a win away from joining winners’ club
EDITORS' PICK
The Best Tech Gifts For The 2022 Holidays
Is it safe to talk politics again at family gatherings? ‘The Reconciliation Dinner’ shows us what that’s like
EDITORIAL: To a bike-friendly future
House energy committee chair Arroyo bats for cheap electricity
vivo’s coming to town to grant wishes with more holiday promos
Pagasa: Warm, sunny Sunday in most parts of PH
MOST READ
LOOK: Vhong Navarro transferred to BJMP detention facility in Taguig
The Elephant Man in the Senate
Posh village as ‘shabu’ haven
LOOK: Zanjoe Marudo bonds with Ria Atayde, her family
Don't miss out on the latest news and information.