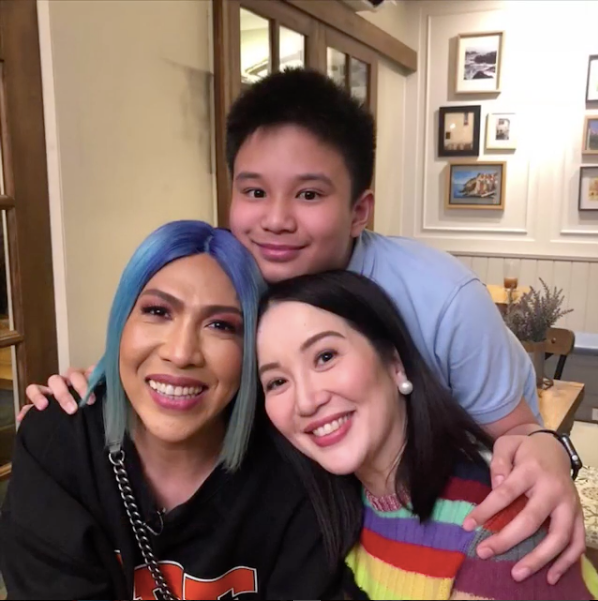 Kris Aquino chose her children’s happiness once more after publicly making up with her “asawa” (spouse) and “Sisterakas” co-star Vice Ganda for son Bimby’s sake.

Aquino shared the tearjerker moment between her and Vice Ganda with whom she had been rumored to be in conflict via Facebook Live on Saturday, July 21. “Hello everybody! I told you that somebody special was coming and I think he came because of this person [Bimby],” she said, rising after seeing the person who arrived.

The camera’s focus then shifted to Bimby welcoming Vice Ganda who immediately enveloped the 11-year-old in a tight hug. “I miss you, I love you,” the comedian said to Bimby. Aquino made her way to the duo and Vice Ganda immediately kissed her on the right cheek. Wrapped up in each other’s arms, Aquino repeatedly thanked the comedian.

“Ang pogi mo… ang pogi (You’re handsome… so handsome),” Vice Ganda praised Bimby. The Queen of All Media who was then in near tears can be heard telling her close friend she lovingly refers to as “asawa,” “Namiss ka namin (We missed you).”

Not long after, Aquino could not contain her tears anymore. She remarked, “Pinaiiyak n’yo ko talaga (You really are making me cry).” Her 11-year-old son helped his mother wipe off her tears.

“Sorry kasi ano talaga, hinintay lang n’ya tong moment na to. ‘Yun lang ‘yun, ‘yun na ‘yun (Sorry because [Bimby] had been waiting for this moment [of reconciliation with Vice Ganda]. That’s all there is to it, that’s it),” said the Queen of All Media as Bimby and the comedian hugged each other once more.

“I love you, I love you, everybody. He’s happy, that’s what’s important,” noted Aquino. Her son was then heard asking her, “Were you happy?”

(Maybe now you’ll understand why us adults chose to stay silent [on the rift speculations] despite being intrigued. Because #tobehonest we both prioritized this very loving [and] lovable boy.)

Kris Aquino and Vice Ganda have been subjects of rift rumors since 2015. The comedian has yet to comment or issue an official statement on their reconciliation, as of this writing. NVG

Kris Aquino on work versus parenting: ‘When in doubt, choose the kids’

Not OK for 3 months: Kris Aquino admits rift with PNoy