Sam Heughan likes to go from Jamie to James—Bond, that is | Inquirer Entertainment
Close
menu
search

Sam Heughan likes to go from Jamie to James—Bond, that is 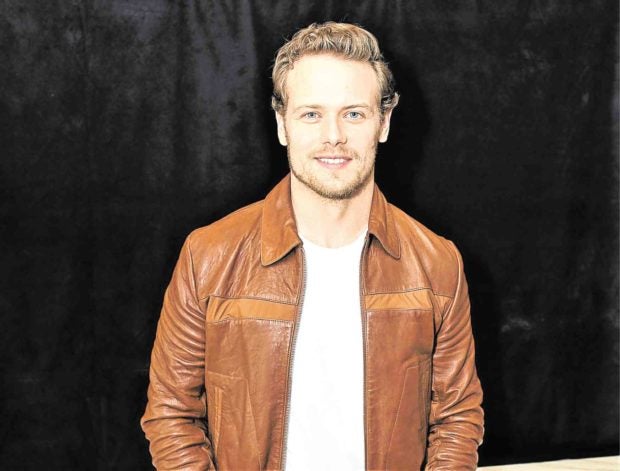 LOS ANGELES–“Outlander” star Sam Heughan, who admits he wants to play James Bond, gets some practice in the action-comedy “The Spy Who Dumped Me.”

Swapping his period costumes as Jamie Fraser for an elegant tuxedo, Sam looks 007-ish in his new movie, whose name is a play on the classic Bond title, “The Spy Who Loved Me.”

The 38-year-old heartthrob also talked about what to expect in Season 4 of “Outlander,” his popular series with Caitriona Balfe (Claire Randall) and Tobias Menzies (Jack Randall).

Can you talk about the sexiness of being a spy? Obviously, the film is a nod to past Bond movies. Or it’s probably closer to the Bourne movies, actually—the tone and the action. I’ve always wanted to play James Bond. It’s part of every British actor’s heritage.

I read a great book about someone from the MI6–his life within MI6 and what that daily life meant to him. It is a high-stakes, dangerous situation. We had to make that real in this movie for the comedy to work.

We have the first female Doctor Who (Jodie Whittaker) now. Do you think there will ever be a female Bond? I’d love to see that. I’d like the part myself (laughs) but if they are going to cast someone, let’s have a female Bond.

Do you think that’s possible? I think it’s feasible, but who knows what Eon Productions and Barbara Broccoli (Bond movie producers) want to do with it.

Who is your favorite James Bond? And if you were given the chance, how would you play him? That’s tough, but I loved Timothy Dalton because he was slightly edgy and dark.

Sean Connery was brilliant. I loved Roger Moore because I liked his eyebrow raise and the slight campiness of it.

But if I had to choose one, probably Timothy Dalton. His “The Living Daylights” was more edgy.

And what would I do? I want to see a Scottish Bond. I’d like to see a young Bond. Let’s see the beginnings, the origins.

Look, Bond is a bit of a dinosaur, isn’t he?

Daniel Craig started bringing emotional depth to him and maybe we could go further with that.

Anyone can do the action, and that’s a lot of fun. But he’s got to have gravitas, as well. He’s also got to have a “who is he and why is he the way he is?”

While making this movie, which scene gave you such an adrenaline rush? It’s the big action sequence in Café Sacher in Vienna, where I basically destroy the café–shooting guns and kicking some ass out.

But to be honest, there was a shot at the top of the Berlin Museum. I’m standing there in a tuxedo and we had a great crane shot. It was one of those moments where you’re like, this is a big movie, there’s a huge camera on a massive crane out there and we’ve got hundreds of extras.

Do you think you would be a good spy? I’d be a terrible spy. First of all, they have to fit into any scenario. Spies are undercover a lot, it seems in countries with hot temperatures, in which I’m not so good with.

While you do good stunts, the women kick ass in the movie. Did you enjoy seeing that side of women? They kicked my ass (laughs). Completely. Not just Mila Kunis and Kate McKinnon, but Susanna Fogel (director), she is the kick-ass.  She wrote this terrific script with David Iserson and she really helmed the whole thing with great humor. She was always calm and in control.

This is an action-comedy. How comfortable were you doing the comedy part? I was terrified, or intimidated, shall I say.  “Outlander” is one thing and drama or theater is where I come from.

To be standing opposite Kate McKinnon from “SNL” or Mila Kunis was, from day one, kind of intimidating.

So it was a very big learning curve for me—the comedy world. There’s a way of working. They very much pitch ideas. They’re constantly changing the script. Every take would be different with those girls.

It was a lot of fun to be in that environment, which is actually more free.

Susanna created this free environment, allowing people to do what they’re good at.

The premise of the movie, also suggested in the title, is that in being a spy, it’s almost impossible to have a healthy relationship in your personal life. Do you relate to that? Sebastian probably doesn’t have much time for relationships. It’s probably his job that screwed them up. We can all probably relate to being busy. So, your personal life does get put to one side.

When you first cut your long hair short, did you feel like Samson losing his power? Oh, I’ve lost the power (laughs). Maybe. We’ve got a great wig department (in “Outlander”).

Yeah, it’s pretty much part of the character and certainly, in growing my hair, it becomes part of who Jamie is.

So, I was nervous about cutting my hair, to be honest, because it becomes a part of your brand and who you are.

Talk about that next film. It’s “Bloodshot,” which we’re shooting in South Africa. I love it there and it’s a beautiful, amazing place. And Dave Wilson, who’s directing, has been collaborative and inspiring.

We have a great cast (Vin Diesel, Toby Kebbell and Michael Sheen) as well, so it’s going to be cool.

Susanna said that the crew members had a sister, wife or girlfriend who wanted to meet you. It’s about the character. Jamie Fraser is like this unicorn of men. To be honest, that’s down to Diana Gabaldon and her writing.

How do you see yourself when you look at the mirror?  It isn’t quite so good-looking.

Let’s riff on the title. What did you learn if you have been dumped, if ever? I guess you have to grow from every relationship, don’t you?

Hopefully, you moved on from the last to find something even deeper, more rewarding and challenging.

From each relationship, we learn something, hopefully.

Can you share a story of a date that was awkward? I had a date once that I was supposed to meet outside, of all places, Burger King. I waited for four hours. I was 16. I went to her house and told her dad. I found that she had been waiting at Burger King on the other end of the street. So that didn’t go too well.

By this time, are you used to taking off your shirt for scenes? No, [I’m not]. It’s a part of the show.

“Outlander” fans are counting the days until November. What can they expect in Season 4? We’re portraying America in its infancy.  For Jamie and Claire initially, it’s pretty good. We finally get to see them together, settling down and being domestic, almost.

It’s America in its infancy, so it’s a land of immigrants. It’s interesting to see all these different cultures, in a big mishmash. Scotland is doubling as North Carolina, where we are set.

This finale is our strongest yet. It’s going to take you a few episodes to get there, but without giving away too much, we have some remarkable Native Americans.