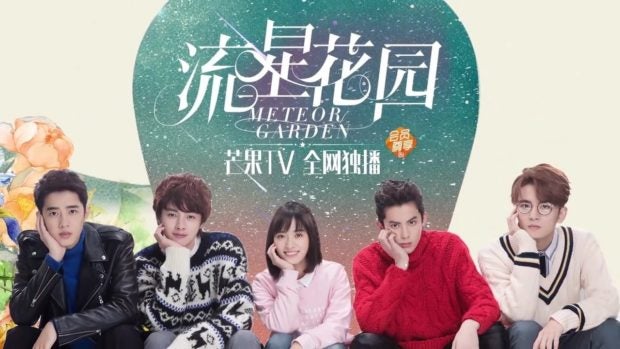 The 44-episode reboot revolves around the F4 friendship and a love triangle, bringing nostalgia for fans. (Twitter/MeteorGardn2018/-)

JAKARTA — There is no red card with F4 written on it, which means a warning for messing up with the alpha males of a top university.

Instead, there is a joker card but still with F4 written on it – a signal to whoever wants to challenge the top four tall, smart, good-looking guys to a bridge game. The loser will receive physical punishments ranging from cleaning the school for the whole semester to staying in the biology lab a whole night.

Last year, when Chai announced that she would remake the series with new faces – the new F4 comprises Dylan Wang, Darren Chen, Connor Leong and Caesar Wu – most fans of the original series were excited to watch the remake. A lot of them have taken to their their social media accounts to search for these new hearthrobs.

Prior to the broadcast of its first episode, fans across Asia demanded to be able to stream it online. Viu and Netflix announced that they would broadcast the series. The series is already available on Viu Indonesia.

The Meteor Garden 2018 press conference was a grand event – similar to a mini concert with F4 singing “For You” and the original theme song “Ni Yao De Ai” being sung by singer Penny Dai. Dozens of media representatives and hundreds of fans were in attendence.

Chai has tried really hard to make the reboot another success.

From the first six episodes – which fans can watch online via sites such as dramacool or dramanice – it is obvious the drama sticks close to the original Japanese manga Hana Yori Dango by Yoko Kamio published from 1992 to 2003.

The early episodes still show the F4 as powerful among their peers – simply because they bully others. That is until Dao Ming Si meets Sanchai and begins to respect her toughness in response to his childish acts and begins to fall in love with her.

The reboot has brought nostalgia for fans. However, elements of the story have been adjusted to fit today’s trend.

There is less bullying, and the bullying is a lot tamer than the original back in 2001. They fight a lot verbally but the violence has lessened.

F4 today is a lot fancier, a lot more stylish, as they wear high-end street fashion wear such as Offwhite and famous brands like Burberry. The shooting location was also moved from Taipei to Shanghai, China, with several overseas scenes such as in London.

We can also see lots of product placements: Vivo mobile phones, a BMW i8 sports car and the gaming apps they endorse.

As Chai had promised to make the new series a fuller and flashier adaptation of the books, the budget for the drama is around NT$720 million (US$24 million), which is 30 times higher than the original.

The first two episodes finished third on the average audience share in Shanghai while the remaining four finished fourth. The series has a promising future.

Good looks, good fashion and cheesy lines is the same old recipe that fans crave. After all, Meteor Garden successfully made girls swoon in the past. With a little twist here and there, F4 will once again win fans’ hearts.