Pierce Brosnan back singing, dancing in ‘Mamma Mia 2’ and he loves it 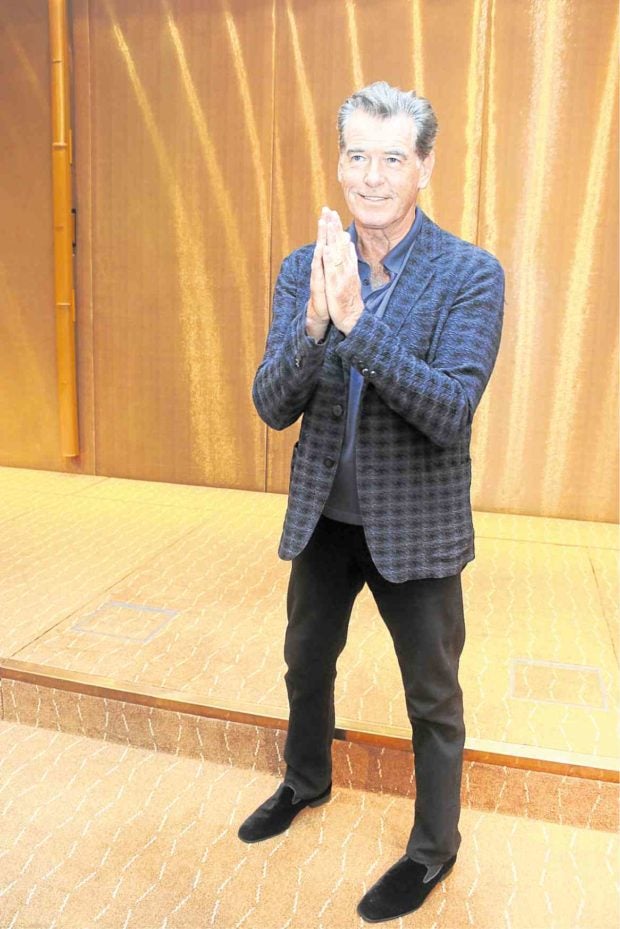 Instead, he is back playing Sam in “Mamma Mia! Here We Go Again.” Everyone has returned—from Meryl Streep (though she has fewer scenes because of a plot development involving her character, Donna), Amanda Seyfried, Dominic Cooper, Colin Firth, Stellan Skarsgard, Christine Baranski to Julie Walters.

And there are new members of the cast—Cher, Andy Garcia and Lily James as the young Donna. But this time, Ol Parker has taken over directing duties from Phyllida Lloyd. Of course, there’s still the joyous, infectious music of Abba, composed by Benny Andersson and Björn Ulvaeus, who also serve as producers.

Pierce said he enjoyed staying with his wife, Keely, on the remote Croatian island of Vis, where they filmed and which subbed for Greece. He has two sons, Dylan and Paris, with Keely, an American journalist whom he met when she interviewed him. He has another son, Sean, and two adopted children, Charlotte and Chris, with his first wife, actress Cassandra Harris, who died in 1991.

Did you miss having Meryl Streep for the full shoot, as in the first movie? Oh, I missed her. I love Meryl. And we became good friends. I have the greatest admiration for her as a woman, actress and person. And she left a lasting impression on my heart. So within the context of the story, it was delightful for my character, Sam, to have those emotions as slight as they are throughout the piece.

But Meryl permeates the piece. She left such a mighty impression on the world in this role of Donna.

One of the memorable moments in the first movie was of Meryl singing “The Winner Takes It All” to you. What are your memories of filming that scene? Oh my God, I can still see it. We’re up on this mountaintop. It was a glorious day. It’s a big song. It’s an aria unto itself. And Phyllida (Lloyd, director) designed the shot to be a circular motion shot. I just remember thinking the actor’s credo—leave yourself alone. Be in the moment. Listen to the emotion of the song and just be there for Meryl. Just be there for the character.

You travel a lot for work. You shot this movie in Croatia, for instance. Are you a good traveler? I travel well. I’ve been on the bus, back of the bus, top of the bus, under the bus (laughs). I’ve been all around the bus. It’s just an actor’s life.

Do you have a favorite destination? Kauai (laughs). That’s home. That’s where Keely wants to go, so wherever she wants to go, I’m right beside her.

Did the cast stay in the same hotel while filming in Croatia? No, we all stayed around the island. Keely and I were right in the middle of the harbor. I’d wake up in the morning and the kids would be out there, saying “James Bond, James Bond!” (laughs). I got to know them all.

You walk down the street or go out for an evening, and there would be Colin Firth and Stellan Skarsgard. The three of us are friends, but I had my girl with me. We’d sit and have dinner.

What makes you feel free and untethered? Waking up in Kauai, at 4 in the morning, going out, watching the sun come up. I’m standing at my easel and painting. I’ve followed the course of the brush, the heart, the paint, and it’s good. And the hours drift by. Working with great actors and good scripts and feeling that you’re doing something meaningful.

When you were younger, which bands did you like? I did see Abba. I watched the Eurovision Song Contest back in those years. I watched them win the contest. I thought this quartet of people was rather charming, novel and funny. But I can’t say that I was an Abba fan. I was into Spirit, Bob Marley, Van Morrison, Crosby, Stills, Nash & Young, Joni Mitchell and, of course, Bruce Springsteen.

Since making the first film 10 years ago, have any Abba songs stayed in your mind? “The Winner Takes It All” for the very reasons I’ve spoken about Meryl, watching her perform that song. It’s a gorgeous love song. And “Dancing Queen” is so epic and big.

But the overall poetry and lyricism of Abba’s work and that they had their own love affairs—these two men and two beautiful women—that’s what made their music so enthralling and captivating.

Do you enjoy singing in these “Mamma Mia” films? By no means am I a great singer, but I like to sing. I’m Irish and the Irish love singing and dancing. But the first movie was such a huge undertaking. They came out to the house with a young orchestra conductor. I’ve forgotten his name. He gave me the headphones and all the songs [to rehearse]. So I just sang them every day.

I drove my boys nuts. I drove them to school while singing “SOS.” They said, “No, dad, no, no.” “It’s going to be good, sons.” “No!” They said to their mother, “What’s dad doing? What’s happening?” And the lady who looks after us in the house said, “Oh, what’s wrong with Mr. Brosnan?”

Anyway, I persevered and I got a platinum album out of it. The check didn’t bounce. And they asked me back. That’s the remarkable thing about actors. It’s just the passion, discipline and focus of wanting to be great.

Is there a boy still in you? Do you consider yourself mature? I’m looking forward to it (being mature) some day (laughs). I don’t want to mature.

You have hardly changed. Oh my God, I have changed. Oh yes. I know in my mind I have one image of myself, then I pass the shop window. I go, oh boy, stand up straight (laughs). Really, exercise more.

The movie opens and there is Amanda Seyfried, and my heart swelled. Watch this young woman grow up from a 21-year-old young girl to a woman now with her own child. You go to the set and there she is, she’s nursing her baby. There’s a great poignancy to that.

And we’ve all remained friends. There’s respect for each other’s work and who we are as people. Phyllida Lloyd really created a beautiful company.