What Zanjoe, Empoy have learned from their reunion project 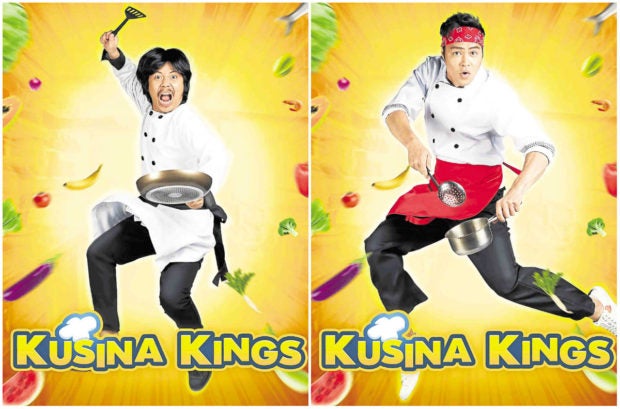 For Zanjoe Marudo and Empoy Marquez, playing cooks has given them greater respect for people in the culinary profession.

“It’s hard to be a chef, a food technologist or a cook. I’m proud of them. They endure getting burned or accidentally spilling hot oil on themselves just so they could serve us a good dish,” Empoy told the Inquirer.

Zanjoe, meanwhile, said he discovered different ways to cut meat and vegetables while working on the film, “Kusina King.” He was also surprised to find out that they have confusing and hard-to-pronounce terminologies.

“Our chef on the set taught us a lot. Sadly, I am not able to apply them because I don’t cook at home,” Zanjoe added.

The actor, however, did learn how to make adobo, the dish that his and Empoy’s characters present at a cooking competition, called “Kusina King Challenge” in a bid to save their restaurant from closing. “We call ours AdoBro,” Zanjoe explained. “Unlike Empoy’s character (Benjie), mine (Ronnie) isn’t schooled in cooking, but he is good in the kitchen.”

Zanjoe added: “I also realized that you don’t have to be a chef to come up with a good dish.”

“Kusina King,” which opens in cinemas on July 25, is Zanjoe and Empoy’s reunion project. The two last worked together in the ABS-CBN series, “Super Inggo,” in 2006.

“Empoy hasn’t changed a bit. He has remained humble and still prefers to collaborate with his costars. Just like 12 years ago, I would still find him sitting quietly in one corner, oftentimes, asleep,” recalled Zanjoe.

Empoy is seen regularly in the romantic comedy series “Since I Found You,” along with Alessandra de Rossi, Arci Muñoz and Piolo Pascual. He is now a brand endorser, too.

“He takes comedy seriously. He is a deep thinker—a true artist,” Zanjoe declared. “Empoy is also very spiritual. I guess that’s why he is so blessed.”

For Empoy, Zanjoe is one of the most talented actors in the biz, “because he is effective in both drama and comedy … We get along well because we have similar personalities. We’re almost of the same age, unlike Papa P (Piolo Pascual), who is way ahead,” Empoy quipped.