'Grease' at 40: Still the one that we want | Inquirer Entertainment
Close
menu
search 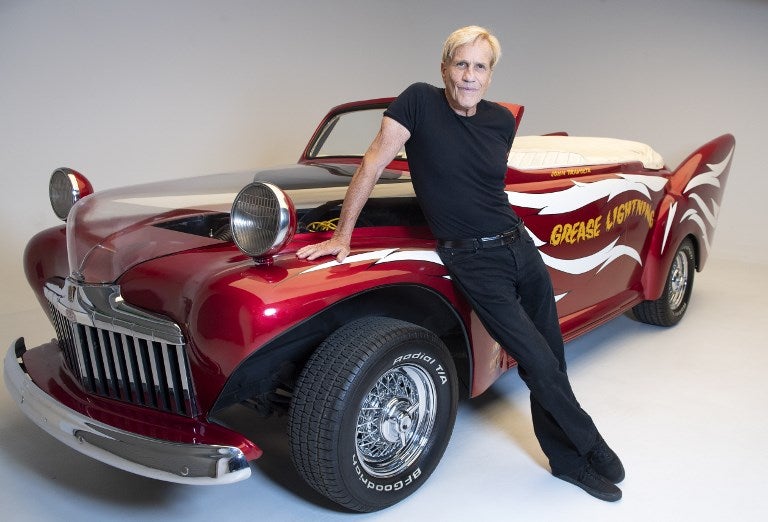 U.S. director Randal Kleiser poses during a photo session for AFP with the “Grease Lightning” car, for the 40th anniversary of the movie, at the Petersen Automotive Museum in Los Angeles, California on July 12, 2018. Image: AFP photo/Valerie Macon

Four decades have passed since the Rydell High gang twisted, hand jived and crooned their way into the hearts of teenagers the world over—but we’re all still hopelessly devoted to “Grease.”

The classic musical, which is celebrating its 40th anniversary, took moviegoers back to their high school days with girl next door Sandy (Olivia Newton-John) and bad-boy T-Bird leader Danny (John Travolta).

“When we finished it, we really didn’t know what kind of impact it would have,” filmmaker Randal Kleiser, who made his feature-length theatrical directing debut with “Grease,” said in an interview with AFP.

“We thought it would do well with teenagers for a summer or two but never thought that, 40 years later, that amazing amount of response from all over the world, and all ages, would happen.”

Based on a hit Broadway musical about the love affairs of 1950s high school students, it was shot over two months in LA for $6 million, and was initially eviscerated by many critics.

But it ended up grossing almost $400 million and was the most successful live-action movie musical of all time until “Mamma Mia!,” 30 years later.

When Kleiser cast his leading couple, Travolta had already filmed “Saturday Night Fever” but was not yet released—and he was largely known as the young heartthrob from ABC sitcom “Welcome Back, Kotter.”

Newton-John was a pop music superstar, with several hit records under her belt.

“John and I both wanted Olivia and she was resistant because she’d done a movie that didn’t do well in England, a sci-fi movie, and she thought she might be a little too old to play opposite him,” Kleiser says, referring to “Toomorrow” (1970).

“She requested a screen test and we did it. John and I both treated her like a little sister, gave her all the encouragement, and it worked.”

Travolta and Newton-John have remained close friends over the decades, starring together again in 1983’s “Two of a Kind,” a flop by any measure, and reuniting in 2012 to make a Christmas album.

They swap text messages and have supported each other through dark times, including the death of Travolta’s son in 2009 and the return of Newton-John’s breast cancer after she had beaten it in the 1990s.

Kleiser told AFP that while he had seen his stars separately over the years, an anniversary get-together at the motion picture academy in Los Angeles next month would be the trio’s first full reunion.

The director made other movies after “Grease”—most notably “The Flight of the Navigator” (1986)—but the lure of big studio blockbusters lost its luster and he moved away from the Hollywood system in the 1990s.

In a wide-ranging interview he spoke of his frustration with Barry Gibb’s lyrics for the iconic title track sung by Frankie Valli, which he thought struck an incongruously dark tone.

Kleiser took Gibb aside and it emerged the Bee Gee knew nothing about the movie, the screenplay or the stage show—and thought the word “Grease” was ridiculous.

“I spoke to him about changing the lyrics. I said, ‘There’s no serious themes in the movie,’ and he says, ‘We’ll why don’t you shoot a serious scene so the lyrics will work?'”

Kleiser believes the film’s longevity can be attributed to its universal themes, the chemistry between his leads and its appeal to our nostalgia for a more innocent age “where there were no terrorist attacks or shootings.”

“That all came together in a perfect storm and hit the public zeitgeist,” he said.

Travolta became a global superstar and his career highlights in the intervening years—another 30-plus movies—barely need rehearsing.

After a lull in the 1980s, he underwent a resurgence sparked by an appearance in Quentin Tarantino’s 1994 masterpiece “Pulp Fiction” that made him an icon for a whole new generation.

She says she still has the skin-tight black pants she wore in “Grease.”

Kleiser still goes to screenings but says he prefers these days to watch the audience experiencing and enjoying his crowning achievement.

“I see lots and lots of flaws in it but I think the flaws are part of the charm of ‘Grease’—the fact that it has a rough-around-the-edges feel,” he told AFP.

“It’s not real slick—everything is not perfect—and I think that adds to the feel of it.” MKH

Why is ‘Grease’ so durable?

Fall in love with ‘Grease’ again and again