8-month rift over for Christian, Jun and Perci 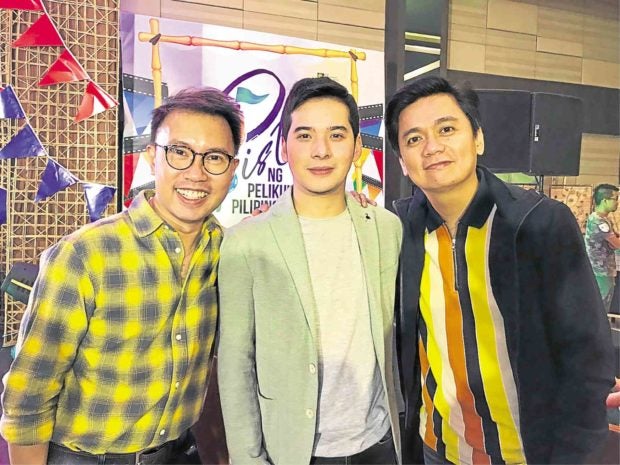 Actor Christian Bables announced that he has finally reconciled with filmmaker Jun Robles Lana, with whom he had a disagreement in relation to his nonparticipation in the comedy film, “Born Beautiful.”

Christian was supposed to reprise his role as Barbs, the best friend of Paolo Ballesteros’ character, Trisha, in the sequel of the critically acclaimed comedy, “Die Beautiful.”

The reconciliation happened at last week’s launch of the 2018 Pista ng Pelikulang Pilipino (PPP), where both had projects that were chosen as finalists. Jun is the director of the romantic comedy “Ang Babaeng Allergic sa WiFi,” while Christian is a cast member of the Chito Roño entry, “Signal Rock.”

Christian said he was able to speak with Jun for the first time since the controversy broke in November.

“Direk Jun was with Direk Perci (Intalan, producer) when I arrived. I approached them because I wanted to hug them. I said sorry and we talked. Whatever transpired at the time, I’d rather not divulge. I’m just glad that everything is OK now,” Christian told the Inquirer shortly after the PPP launch at the Sequoia Hotel in Quezon City.

“I’m feeling much better now. I’ve been carrying this burden since November. I had prayed to regain their friendship,” Christian confessed, adding that he still regretted not being able to work on “Born Beautiful.” He swore that the misunderstanding was really between Jun and his former manager, Jeff Ambrosio.

“I was totally out of the picture. I love both of them. I owe them a lot, in terms of my career. I was just waiting for them to iron things out. I kept quiet because I didn’t want to unintentionally make the wrong move,” he explained.

The actor said he also hoped to disprove negative comments that people said of him online—“that I’ve become conceited, that I’ve turned into an ingrate… Those were painful to read. I know that without the help of Direk Jun and Direk Perci, I will not be where I am now.”

For his part, Jun said he felt “relieved that all is well.”

He added: “I also felt that he was sincere. I’m so happy that it’s over. I gave him a hankie—a giveaway from the film (‘Ang Babaeng Allergic sa WiFi’). I hope he keeps it.”

Perci, meanwhile, admitted he had been chatting with Christian on Facebook ever since, so “it’s really not an issue for me,” he said. “When he came up to us, he cried. I told him, ‘It’s OK, Christian. Things like this happen. At least, you’re now under new management. Things will change for you.’”

Perci said he also appreciated that Christian’s new manager, Boy Abunda, called to give him a heads up. “I told Tito Boy that it would have been different if Christian abandoned the project, and it got shelved. We now have Martin (del Rosario) to play Barbs. We’ve already revised the project around Martin. We’ve already moved on.”

Asked what he picked up from the whole experience, Christian said: “I learned not to be too trusting. Because of what happened, I got to know who among the people around me are genuine and who are fake. I was too naive when I first joined the industry and was emotionally unprepared for what would happen to me. I will not change myself but, I guess, I’d be more careful now. The experience was heartbreaking.”