Charlie Puth charts his own course with album and tour 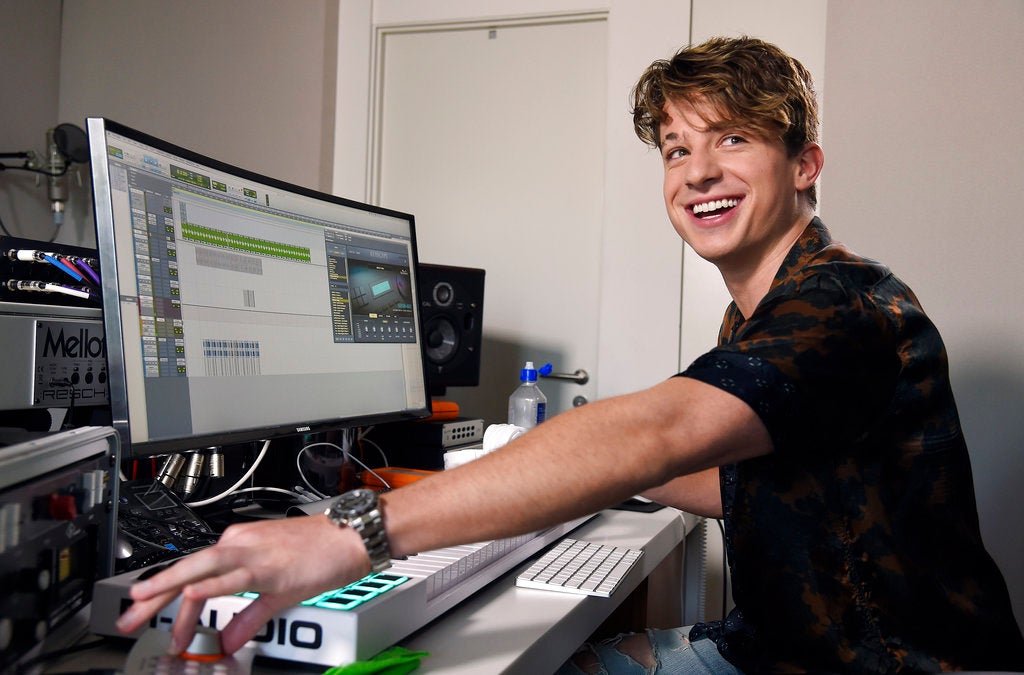 In this May 29, 2018 photo, singer-songwriter Charlie Puth poses for a portrait in his home music studio in Beverly Hills, Calif. to promote his new album “Voicenotes.” Image: Chris Pizzello/Invision/AP

“I’ve wanted to make music like this for a very, very long time, but I almost wasn’t, dare I say, allowed?” Puth said of his recently released sophomore album, “Voicenotes.”

“No one wanted to hear too much jazz in pop music.”

His response: “Let me prove to you that it’s possible.”

While perched behind a piano — one of a dozen or so keyboards stacked up in every corner of his cozy home recording studio in Beverly Hills — Puth recalled his humble beginnings as a man on a mission.

“The hardest thing was just getting people on board, convincing people that I did write good music. Granted, I mean, just four years ago my music was not nearly as — in my opinion — good as it is now,” said the 26-year-old. “So I don’t blame A&Rs for looking at their phones while they were in meetings with me and half listening to the songs.”

So Puth, a YouTube star who rocketed to fame with the 2015 Wiz Khalifa collaboration “See You Again,” perfected his craft.

“It just took a couple years for me to get better at producing and get better at writing,” he said. “And then I didn’t have to try to explain it to them anymore. I would just say, ‘Here’s the three-minute MP3 proving that you can put jazz chords into a pop record and it could do really well on the Billboard chart.”

Puth recently invited The Associated Press into his tranquil, mid-century style home to chat about his 2018 Honda Civic Tour with pal Hailee Steinfeld, which kicks off this week, how he catches concerts these days and why Hawaiian punch is the secret to his success.

AP: You two collaborated on the track “Change” on “Voicenotes.” Talk about a full circle moment.

Puth: That is pretty crazy! Second concert was the Beach Boys, which was pretty cool, too. Yeah, I started off right at PNC Bank Arts Center in Holmdel, New Jersey.

AP: How often do you get to see live music now?

Puth: I’m a casual concertgoer. I’m not looking at tickets and waiting outside the Roxy per se because nowadays I truly can’t do that. But I will go to concerts casually if my friends happen to be going and the situation is easy. Like, “Oh someone else is driving? Perfect!”

Puth: With a large group of people that are going to surround me if I don’t have security because it’s weird, people run up to me. Nowadays with social media, they think they can just jump on me. I tried to go out the other day and this person literally almost tackled me.

AP: You seem to take it in stride. Is that unnerving?

AP: Can you experience concerts the same way now that you’re famous?

Puth: I can. The most important thing for me is I don’t want to make it about me if I’m seeing one of my friends. …I was in London, I saw Harry (Styles) play and I stood behind the projector and nobody knew I was there. His show was amazing!

AP: You were trying to blend into the background?

AP: You’re launching your first headlining tour — what do you want fans to experience?

Puth: I want everyone to lose their mind. …I treat the show as I treat a three-minute song when I’m producing it out. There’s no chance that anybody can get bored while listening to a three-minute song on the radio when I put it out because I just won’t allow it. I won’t allow you to change that dial. I want you to be hooked every second that you’re listening to it and that goes for the hour and a half show as well.

Puth: Hawaiian Punch, Kool-Aid, every bad drink you can think of. Every time I get offstage I’m just like electric, like, “Let’s make seven songs on the bus right now! Let’s stay up till 7 a.m.!” So I usually cater to that by drinking sugary drinks. That’s something my trainer would not like to hear.

AP: How do you prepare to go onstage?

Puth: Doing those goofy vocal warm-ups and putting on Stan Getz, Gilberto, Brazilian music, something really relaxing because I get really nervous before shows still, so I like to put myself in like a different place. Like, oh, I’m at a Brazilian cuisine restaurant and I’m just hanging out with my friends — 10 of them so I don’t get tackled. NVG

WATCH: Charlie Puth unveils ‘The Way I am’ Music Video