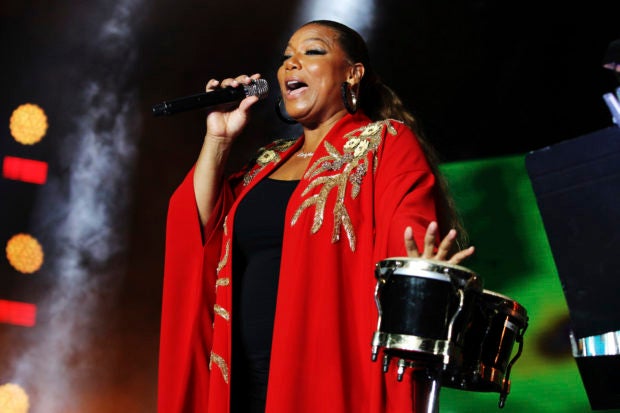 Queen Latifah performs at the 2018 Essence Festival at the Mercedes-Benz Superdome on Saturday, July 7, 2018, in New Orleans. Image: Invision/Donald Traill via AP

NEW ORLEANS (AP) — Iconic females in the music industry shined at the Essence Festival, where Queen Latifah used her debut performance to celebrate “Ladies First” and her 30 years in the trenches.

Latifah was one of the headliners on the festival’s main stage Saturday and was joined — to the delight of the crowd — by hip-hop legends MC Lyte, Yo-Yo, Salt-N-Pepa, Missy Elliott and Monie Love as well as rapper Remy Ma and R&B singer Brandy. She also entertained the audience with her vocal skills, showcasing her love of jazz with a rendition of Phoebe Snow’s “Poetry Man”, which she dedicated to her mother, who died this year of a heart condition.

In an interview with The Associated Press, British singer-songwriter Marsha Ambrosius said she looks forward to performing at the festival every year especially since she gets to experience what she described as a “surreal” lineup.

“The lineup is one long weekend of legends, icons and my heroes… It’s an honor and a humbling experience to be able to set foot on stage with people I’ve looked up to my whole life,” said Ambrosius, who’s performed more than a half-dozen times at the festival.

During her set inside one of the event’s Superlounges — intimate club-like spaces set up in the Superdome’s cavernous halls — Ambrosius gave the audience a taste of her hits “Far Away” and “Late Nights & Early Mornings” as well as songs from her new album, “Nyla”, named after her 1-year-old daughter and scheduled for release in September.

“As women, we bury our secrets so deep down, you’d never know what affects us. And, on this album, I decided to not only let them all go, but let them be seen. I’m okay with the scars that I wear. And, I don’t think too many are, and that’s why we can dig ourselves a deep hole of depression when we don’t have to. My music is my therapy,” Ambrosius said of the upcoming project.

“It’s been an incredible journey just getting to know myself and where I am in the world. It’s retrospective, introspective, and I’m dropping gems for those that didn’t have them when they should have. Like, I wish I had a me, kicking me in the behind saying, ‘Just go for it. Just go for your dreams, standing in your own truth. And, if someone despises you for that, then that’s on them. It’s not on you.”

The festival closes Sunday with a much anticipated performance by megastar Janet Jackson, who touched the lives of four single mothers from New Orleans with a surprise Mother’s Day gift that culminates this weekend. The women are to receive makeovers from Jackson’s personal make-up artist, Preston Meneses, and tickets to her performance.