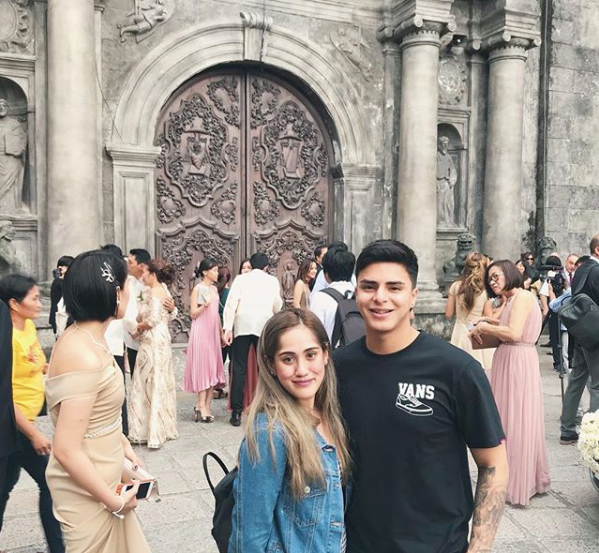 For three months, Ruby Rodriguez’s daughter Antoinette Nicole “Toni” Aquino has been hiding a secret. Now, she thinks the time is right to reveal it.

The 20-year-old daughter of the “Eat Bulaga” comedian and host announced that she is engaged to her American boyfriend Ricardo Centurion. Aquino made the revelation on her Instagram account last Sunday, July 1.

Aquino posted a snap of her hand, wearing her engagement ring and holding on to her fiancé’s hand. She said she had been “itching” to post the news since it happened.

She recalled the day her fiancé proposed: “This guy @centurion_rick wanted to make sure I wasn’t gonna go anywhere and with that he locked it down with a proposal.”

Aquino went on to gush about Centurion: “C’mon why wouldn’t I want to spend the rest of my life with this guy? He’s already more than what I ask for.”

As for people who will say “but you’re too young” and “you haven’t graduated college yet,” she reassured them that a marriage will not happen right away, even asking, “[H]aven’t you guys heard of a long engagement?”

“Clichè to say it but once you know you just know,” she said. Aquino added that although she and Centurion want to spend the rest of their lives together, they still have things to finish — she’s got college and he has an army contract.

She also had a message to those who may have negative opinions about her decision: “…just remember it is MY LIFE and NOT YOURS.” Aquino also hoped that everyone would just be happy and express support for them.

Rodriguez has not issued a public reaction on the engagement, as of this writing. Nevertheless, she greeted her daughter a happy birthday last week, posting throwback photos of Aquino as a baby and a young girl.

I know i know your no longer a teenager but a full pledged lady. But no matter what you will always be my baby girl. I will always look at you this way. Know this I always got your back, support you in all you endeavours. Be your cheerleader and no1 critic. But i will always be forever your BFF and mom. I love you forever, i like you for always as long as I'm living my Baby you will be. Happy Birthday Toni @ninichips 🎂🎂💋💋❤️❤️

She wrote, “No matter what, you will always be my baby girl… I always got your back… [I] will always be forever your BFF and mom. I love you forever.” JB

Repatriation of Filipinos in cruise ship sought after quarantine period