LOOK: Kissing scene described in script of KathNiel’s ‘The Hows of Us’ 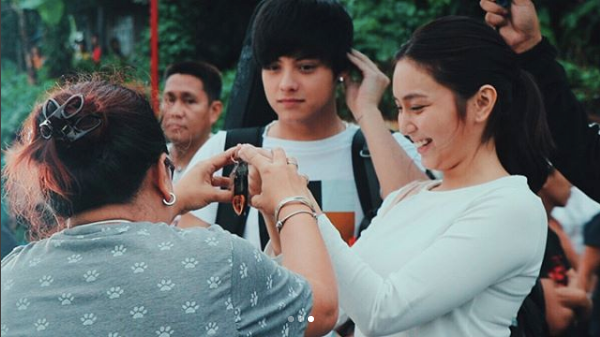 Kathryn Bernardo and Daniel Padilla in Indonesia filming “The Hows of Us.” Image: Instagram/@bernardokath

Will fans of Kathryn Bernardo and Daniel Padilla have something extra special to look forward to in the love team’s upcoming movie “The Hows of Us”?

Screenwriter Carmi Raymundo teased one scene from the movie on her Instagram page last Saturday, June 30. In the photo, it showed that Bernardo and Padilla’s characters (named George and Primo, respectively), were in a bar, in the year 2010.

The scene details Padilla performing with his band. He gives his all on stage, even when all he had for an audience is Bernardo and some waiters in the room.

The script continues to detail how a kiss would be executed by the actors: “Suddenly, George stands up from her seat and with certainty and resolve, she goes up to the stage and with those few people as witness, she kisses Primo with the same intensity as his passion for his dreams.”

Meanwhile, Raymundo’s photo caption had some hugot: “For the persons we said we’d be by this time. And for those who believed in us, naging tayo man ‘yung mga taong ‘yun ngayon o hindi pa (whether we have become those people, or not yet).”

Diehard fans of the love team could not contain their excitement for the project. One fan, @chrssvlln, reacted by quoting a currently famous meme circulating on the internet: “Wala na finish na huhuhu.” (It’s already done.)

Another netizen, @lyle.porillo, said that while she and fellow fans can already imagine how the script would look like on the big screen, and are already excited at this point, they would probably die out of excitement when they do finally see the movie.

As if to echo that reaction, another fan @supremo_chelle simply said she “can’t breathe.”

Bernardo and Padilla’s “The Hows of Us” will be directed by Cathy Garcia Molina, whom they have last worked on 2014’s “She’s Dating the Gangster”. The new movie does not have a release date, as of this writing. JB

LOOK: Kathryn Bernardo, Daniel Padilla in Indonesia to shoot for ‘The Hows of Us’

LOOK: Kathryn, Daniel tour the US